Share All sharing options for: The Jumbo Package │12.12.13 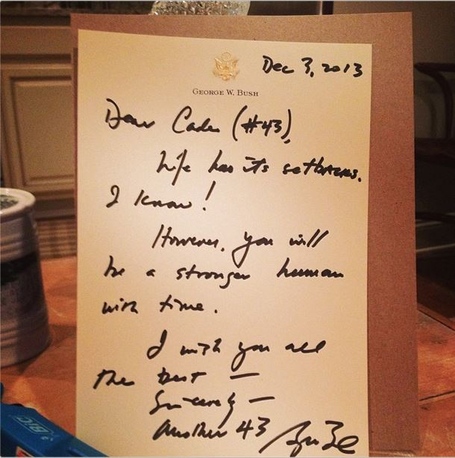 Another one from twitter. Regardless of your party affiliation, you have to think this is a nice gesture by the former President.

Good on you Mr. President and Roll Tide, Cade.

"My conversation with Saban, I think he is firmly committed to being the next Alabama football coach," Crutchfield said.

Yesterday was a weird day. Fournette, a high school player, and his coach think Saban is staying, and this is news somehow?

Okay, now we've reached the point of no return. When recruit's "mentors" are now sources for Saban rumors it's time to walk away from the computer.

Mack Brown's attorney on coach's future: 'He'll decide that on his own and all these reports are wrong' | AL.com

Mack Brown's lawyer Joe Jamail told reporters Wednesday that no decision has been made. But he made it clear it was Brown's decision. "He has not tendered his resignation and has not made a decision yet," Joe Jamail said, per the Dallas Morning News. "He'll make that decision sometime soon."

Something tells me that decision will be made for him at some point today.

Here's what I think is happening. The reason we haven't heard anything from 'Bama regarding Saban's new deal is because Saban is actually waiting till Mack is officially let go, or he steps down, to hear Texas' offer. Smart business men never make a decision until they have all the information at hand.

I think once that offer is made, Sexton and Saban will turn it down, regardless of the amount offered, in favor of the one in place at 'Bama. Rumors are the current offer at 'Bama is around 7 million a year and I wouldn't be surprised if that is bumped up to almost 8 + bonuses, after the Texas offer is offically made.

Just my thoughts on this on-going situation.

UA has a standing offer to make Saban the highest paid coach in the country. UT’s offer is part of the process of determining what the market will bear. Once that’s clear, UA can renegotiate the contract for the new max value. I really think it’s this simple.

Mosley finished behind winner Aaron Donald, a defensive tackle from Pittsburgh for the award named for legendary coach Vince Lombardi.

Forgive me for my ignorance, as I haven't watched that many Pitt games this year, but what in tarnations is going on here? How good is this Aaron Donald kid?

AJ McCarron confident in Alabama's options at quarterback for 2014 and beyond | AL.com

"Everybody was worried when Greg (McElroy) was leaving," McCarron said. "I heard people say Alabama was going to fall off. I'm sure one of these guys will step up and do an unbelievable job and make a lot of Alabama fans proud and the rest of our coaching staff proud."

There's no shortage of options, but the only returning quarterback with much of any experience is Blake Sims, who will be a senior in 2014. Alec Morris, a redshirt freshman, played the first snaps of his Alabama career last month against Chattanooga and didn't throw a pass. Freshmen Cooper Bateman, Luke Del Rio and Parker McLeod did not see the field. Four-star prospect David Cornwell, who had his senior season shortened by a knee injury, is expected to enroll early and participate in spring practice.

My hope is that between Bateman, Del Rio and Cornwell, 'Bama has their next, and hopefully even better, AJ McCarron.

What's Plan B? When you swing for the upper decks its disappointing to end up with a triple. Saban is the home run of coaching hires but when he doesn't land in Austin what becomes of the guy who actually is hired?

How much perspective do Longhorn fans actually have? Look at this list of candidates that have been mentioned so far..

Across the nation, programs yearn for 10-win seasons. But, at Oklahoma, the standard is measured in championships as 10-win seasons seem almost commonplace.

If winning championships is the standard at Oklahoma (their last title came in 2000), my gawd the standard must be conquering Mars for Bama.