Taking a closer look at Alabama's cornerback positioning this year and why, to me, it didn't make a great deal of sense.

I really don't like criticizing the Alabama coaching staff.  In fact, for a variety of reasons, I almost never criticize them -- more on that some other time as I don't want this to become a discussion about when it is and isn't appropriate to criticize the coaches.

But they're not infallible, and there are rare moments when, even in my opinion, it's fair to at least wonder, out loud, why they chose to go in a certain direction.  With that being said, the way the coaches used the cornerbacks this year puzzles me.  First off, this has nothing to do with Eddie Jackson.  None of us have any idea what went on in practice, and without that knowledge it's very difficult, if not impossible, to make a reasonable argument about why one player should've played over someone else. 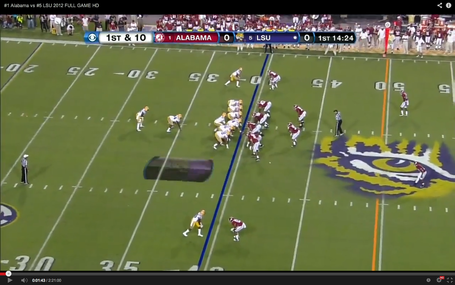 It's much easier for a quarterback, especially at the college level, to throw the ball to the short side of the field, simply because it's a shorter throw.  When a play calls for a throw to the sideline, more often that not, the primary option is going to be to the short side of the field.  Sideline throws to the wide side are far more difficult, and require greater arm strength and better timing.  Even if a quarterback has the arm talent to consistently makes throws to the wide side, the timing needs to be exact, because the ball is in the air for so long, giving the field corner time to react and make a play on the ball.  If the throw is even slightly late, it'll often result in a turnover.

Because more throws, on average, are made to the short side of the field than to the wide side of the field, if a defense chooses to align their corners based on field/boundary responsibilities, they're usually going to play their best cover corner to the boundary.  This puts the quarterback in a bit of a bind.  He can make the easier throws to the short side of the field, but in doing so he'll be attacking the defense's best corner.  Alternatively, he can go after the weaker of the two corners, but it will typically be a more difficult throw.  Lastly, he can attack the middle of the field, but that's where more defenders will usually be located.  None of those choices are really all that great, and as football grows more and more in favor of the offense, this allows the defense to take back at least some control.

That's why Alabama's cornerback positioning in 2012 made a great deal of sense.  Dee Milliner was their best cover corner, so he played the boundary position.  Deion Belue played the field position.

Using the same logic, Alabama's cornerback positioning in 2013 was questionable.  This year Deion Belue was, without a doubt, their best cover corner.  But he played the field position, while the weaker cornerback played the boundary position.  Now that bind for the quarterback, that we discussed, earlier no longer exists.  He can make the easier throws to the short side of the field and go after the defense's weaker cornerback at the same time.

I can think of two possible explanations for why the coaching staff chose to go in this direction, neither of which I like all that much.  The first is that their confidence in the corner opposite Belue was as high, or even higher, than their confidence in Belue.  It's difficult to imagine that they believed this to be true, especially as the season wore on.  Even if this was their initial thinking in fall camp (a mindset deserving of criticism in its own right), they would've been forced to reconsider after their initial starter, John Fulton, was benched following the first possession of the second game of the season.  From that point forward they never really found a good solution opposite Belue.  After Fulton it was Cyrus Jones.  Then it was Eddie Jackson.  Then it was Bradley Sylve.  And finally it was Jones again.  Could they really have believed any of those players were better in coverage than Belue?  Doubtful, at least in my opinion.

The second possible explanation is that, after playing Belue at field corner in 2012, they felt he was comfortable there and didn't want him to change positions.  Admittedly, this theory holds a bit more weight than the first one, but I still see it as insufficient.  The responsibilities aren't all that different between boundary and field corner -- for many coverages they aren't different at all -- and even where they do diverge, I don't think it's anything that a player can't be reasonably expected to learn.  Keep in mind, Belue sometimes is forced to play boundary corner anyway, because if the opposing offense hurries up after the ball switches hashes from one play to the next, Belue is stuck on the short side of the field while the opposite corner is stuck on the wide side of the field.  Either way he has to understand how to play the boundary position.

For what it's worth, I don't think this decision cost them any games.  But I do think it cost them, at times, on certain plays within games, and for that reason it's at least worth wondering why the coaches did things this way.  Additionally, it's definitely something to watch going into next year, as we see not only who the starting cornerbacks will be, but which positions they play.