A head start on the defensive preview, here we take a look at the Sooners' defensive leader and captain, 4 year starter Aaron Colvin

Boys and girls all over the state will soon be up all night, giddy with excitement in anticipation of that magical day: Sugar Bowl day. With that in mind, it's finally time to start digging in to the Oklahoma defensive previews. With the holidays upon us, and thoughts seemingly on agents and coaches’ salaries and whatnot, we will just dip a toe this week. Later next week the real cramming begins. We will cover positional strengths, schemes, and a few play dissections then. For now, we will focus on the main attraction of the Sooner defense, cornerback Aaron Colvin.

The defensive unit for the Sooners has not been impressive in recent years. Like all Big 12 defenses, they are doing their best wet tissue impression while the offenses of the league seemingly create a new wrinkle every day. Coach Bob Stoops, while being a main instigator racking up unthinkable numbers from his offense in the mid-2000s, has seemingly realized the importance of a strong defense and has made several moves in the past few years to solidify the unit.

Forgetting for a moment the struggles of the recent past, this is a team that used to be known for its star power on defense. Names like Lee Roy Selmon, Tony Casillas, The BOZ, Tommie Harris, Roy Williams, etc., etc. litter the pages of the history books, proving that once upon a time, the Crimson and Cream did actually field legitimate defenses. More recently in 2010, Gerald McCoy was a 3rd overall pick by the Bucs from Oklahoma at defensive tackle. The Sooners still put top defensive talent into the NFL, and that looks to continue this coming spring with Aaron Colvin. 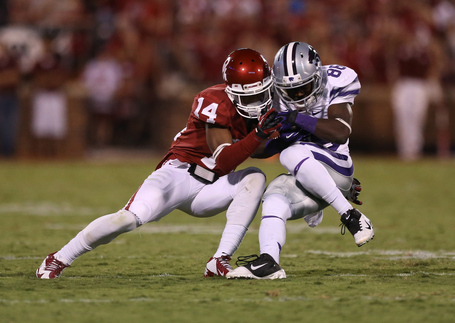 A consensus three star coming out of Owasso High in Tulsa, OK, not much was expected of Colvin early in his Sooner career. Aaron had other plans, as he played in all 14 games as a true freshman and played well, racking up 7 tackles and 1.5 for loss against Texas, and forcing a fumble against Florida State.

Colvin continued to get better the next season, despite making a position change from corner to strong safety. He led the team with 84 tackles and broke up 6 pass attempts. The next year, his junior season, he switched back to corner and continued to flourish. He accumulated 61 tackles and 11 pass break ups, and in doing so was recognized as an All-Big 12 first teamer by the AP and coaches.

This season, his numbers have fallen off a bit, with only 49 tackles and 3 pass break ups. The tackle number is down because an injury kept him from 2 games early in the season, and the pbu number is down because opposing offenses simply don’t challenge him. Despite the statistical decline, and despite fighting nagging injuries throughout the year, Colvin’s play has remained the class of this defense, and again he was named to the All-Big 12 first team by the AP and coaches, and was a semi-finalist for the Thorpe Award. 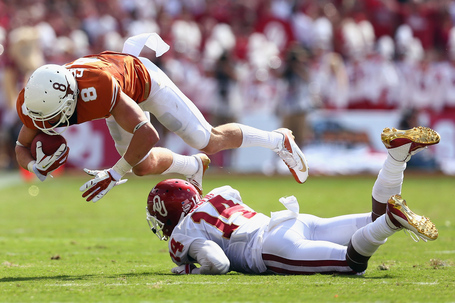 The 6’ 192 lb. corner plays very aggressively, very much like Dee Milliner for the Crimson Tide last year. He is a tremendous boost in run support, showing great instincts and often making plays behind the line of scrimmage. In coverage, he uses his hands very well. Sometimes too well, occasionally drawing a PI flag. He has the speed to stick with most any receiver, and does well enough to shut down otherwise productive pass catchers. Expect to hear Colvin’s name quite a bit during the Sugar Bowl, and again in the first round of the NFL draft in May.