"Our philosophy has always been that if you develop the whole person, not just the gymnast, that the scores will take care of themselves," Sarah Patterson said. "We look for those that want to excel in everything they do, who want to be part of a family environment and who want to be involved in community - to us, that's what it means to be `Built by Bama.' I think that philosophy is why Alabama gymnastics has been so successful over the years."

Share All sharing options for: Border Wars: Inside the Bama/UGA Gymnastics Rivalry

My love for Bama gymnastics started long before I was a student at our beloved University, but was forged in steel as I watched our girls tumble, flip and balance their way to their third NCAA National Championship at Coleman Coliseum in 1996 (my Junior year). As a student, I attended every session of the NCAA Championship I could and was in utter shock that more students were not there to support our girls - at that time it was free for students to attend even the Championship meets, and while we were having a few good years in football, it wasn't the glory days we are seeing now how could we pass up the opportunity to watch champions? Our girls broke records and shut down the UCLA Bruins with two back-to-back 10s on floor routines by Kim Kelly and Danielle McAdams.

After we won the Championship there was no fanfare, no parades and no recognition; I was utterly disgusted. So, along with one other current student at UA, I created the Ten Troupe (we thought spelling it like that gave it more dignity - give us a break, we were twenty). During my first meeting with Coach Sarah Patterson we even discussed how we were positive that the University would have canceled classes if the football team had won a National Championship, and here we were with two Nattys in gymnastics in five years and three in eight (1988, 1991 and 1996), and the only planned "celebration" was to come at next year's homecoming football game halftime.

I get teary-eyed when I see that the Ten Troupe is still going strong, though with a much different angle than we had first envisioned (and I love the direction that it took). Back in the days when Meredith Willard could pick out and read the sign that I was holding in the stands, I never imagined that I would have to beg, borrow or steal tickets to a SOLD OUT meet between UGA and Alabama only fifteen short years later.

This rivalry was right on the verge back then. Since the NCAA introduced the sport in 1982, Bama and UGA are two of only four schools that have ever won the NCAA Women's Gymnastics National Championship (Utah and UCLA being the other two). With Alabama and UGA being in the same conference and being border states, it sets the rivalry at a heated level that isn't seen with Bama's other "typical" rivals (Auburn, LSU, Florida).

This is the 131st all-time meeting between the two schools, with Georgia holding a 79-49-2 advantage, though the majority of those meets have been held in the postseason. In 42 dual meets against Alabama, the Gym Dogs are 31-11. Alabama has won eight of the last nine meetings, including the last seven straight. Georgia last beat Alabama in a dual meet in 2009, 197.175-196.275 in Athens.

Georgia has won ten NCs, including five straight from 2005-2009 under coach Suzanne Yoculan, but there have been two changes of the guard since then: 2009 with head coach Jay Clark taking over after Coach Yoculan's retirement, and Donna Durante assuming control after Coach Clark's resignation in 2012. Following up Coach Yoculan "Under the Lights" at Stegman Coliseum has been a difficult task and the Gym Dogs haven't finished in the top 5 since Coach Yoculan's retirement (except in individual competitions).

Bama is closing in on Georgia with six National Championships and is looking for a threepeat this year. Coach Sarah Patterson and her husband David have been with Alabama since 1978 , when she was hired by Coach (and Athletic Director) Paul Bryant. When asked about what it was like to work for him, she stated, "It's all true what you hear. I'd come into his office and he'd be asking a player if he had called his mama that week. He put great emphasis on the team as a family - a philosophy I continue today. His insistence on always doing the right thing influenced players throughout their lives. He cared about their personal and professional lives as much as he did about their performance on the field." (.)

I haven't actually attended a gymnastics meet in almost ten years and I'm taking my daughter to her first one ever on Saturday, where more than 50 former Gym Dogs will be honored during Alumni Night at Stegman Coliseum in Athens. I'm sure my daughter will love it - I just wish her first experience could have been at Coleman Coliseum. There's nothing like the buildup - our girls running out onto the floor - and us being able to close our home meet with our best and brightest on the floor routine.

UGA enters this meet at home ranked 8th (previously 9th) with a score of 196.29 overall, while Bama comes in holding at 5th with 196.533. Gymnastics is a game of hundredths and sometimes thousandths of a point. National Championships can be won by .001 of a point. It can be heartbreaking or it can be breathtaking. Currently Florida is ranked #1 (it will be quite shocking if it stays that way after they meet Alabama (Feb 8), UGA (Feb 16), and Kentucky (Feb 22)).

I'm looking forward to finally getting back to a Bama meet, and being able to write about it (and the ones to come) for RBR is just icing on the cake for me. These girls pack a lot of power and deserve respect for the work they do. I consider it an honor to get to tell you their stories. Thank you for reading and Roll Tide! 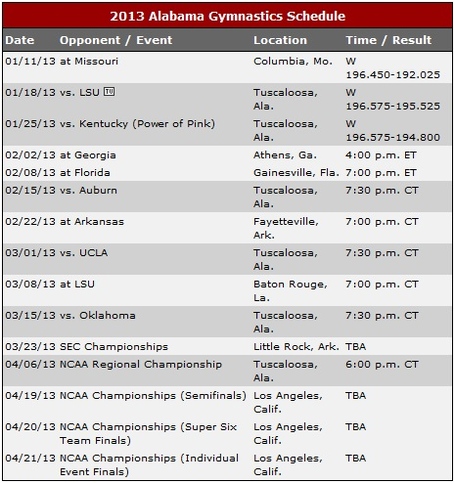 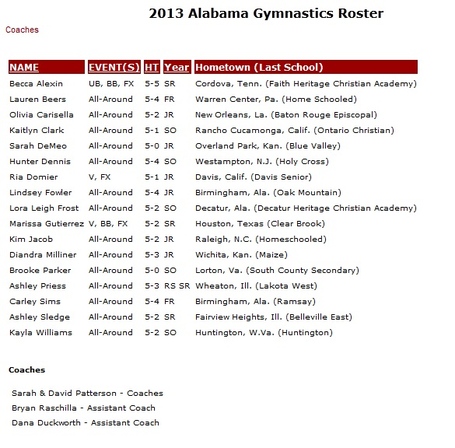 - ed Here's a a great video simply called "The Rivalry".

Alabama Gymnastics: The Rivalry (via BamaGymnastics)