"The Streak" Could Be in Danger

This meet could bring 106 consecutive wins for Bama over Auburn - over 30 years of in state rivalry domination!! The two rivals are currently trending in opposite directions. Alabama has lost its last two meets, while Auburn has reeled off two victories in a row.

Share All sharing options for: "The Streak" Could Be in Danger

After two weeks on the road, the No. 5 Alabama gymnastics team returns home this Friday when it faces No. 15 Auburn at 7:30 p.m. in Coleman Coliseum.

It will be the Crimson Tide's sixth meet of the season and sixth consecutive Southeastern Conference meet and third home contest. Alabama is coming off a pair of losses, despite posting its two highest scores of the season during its road swing, including a 196.95 at Georgia and a 196.85 at Florida.

Auburn is coming off back-to-back SEC wins, beating Missouri on the road with a season-best 196.725 and Arkansas last week at home. The Tigers are mentored by Jeff Graba who is in his third season as Auburn's head coach. The Tigers are led by sophomore Megan Walker, who is ranked 16th on the balance beam, and freshman Caitlin Atkinson, who is ranked No. 19 in the beam.

Alabama is led by All-American Kim Jacob, who opened her junior season by winning four straight all-around titles and tying her career-best in the all-around last Friday at Florida with a 39.425.

The Tide comes into Friday's meet looking for its 106th consecutive win over the Tigers, a streak that dates back more than 30 years and includes both regular and postseason meetings.

While the Tide holds a decisive lead in the all-time series, the battle for in-state supremacy has gotten closer and closer as of late. In its last regular-season meeting, Alabama beat Auburn by just .075 in Auburn on Jan. 27, 2012. It marked the third consecutive time that the UA-AU meet in Auburn came down to the last competitor for the Tide. It also marked the third time in a row that fifth-year senior Ashley Priess clinched the win for the Tide.

"This meet has been very close over the last several years," Patterson said. "I think back to the years when we've had to have people step up to keep this streak alive. Meredith Willard, in the mid-90s comes to mind. She had a sore back, so we weren't going to use her on the balance beam one year down in Auburn. We were struggling in the meet and she came up to me and said `I'll go in if you need me.' It's things like that I remember about this rivalry. People like Meredith who were just winners and did what had to be done for us to keep going." (Roots Woodruff, 2013) 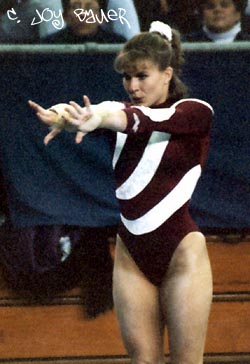 The meet will be televised on a tape-delayed basis by CSS with Melissa Lee and Crimson Tide legend Ashley Miles calling the action. The Tide's radio broadcast of the meet can be heard live on WVUA 90.7-FM and online through the station's website.

Tickets are available through the Alabama Ticket Office (205.348.2262) located in the lobby of Coleman Coliseum and online at RollTide.com. University of Alabama students receive free admission on a first come, first served basis with their ACTion card. Doors open for the meet at 5:30 p.m.