The Walking Dead returned from its mid-season hiatus last week. The general consensus as far as I can tell is that the episode was... underwhelming. I think it was a fine mid-season episode, but felt like it lacked the pop expected of a premier. To me, it was a solid episode that was moving pieces around to setup the rest of the season, and I have a feeling a return to the pacing established in the first half of the season is imminent.

To summarize the main events of the last episode for anybody that missed it: Darryl and Merle escaped Woodsbury with the help of Rick and co., only to immediately abandon the group and go their own way. The Governor has turned into a recluse, save for the odd opportunity to shoot a bitten citizen. Andrea is still terrible. Michonne said not one word in the whole episode, but she can still scowl like no other. Glenn and Maggie are having trouble dealing with their experiences in Woodsbury. And... oh yeah, this happened. 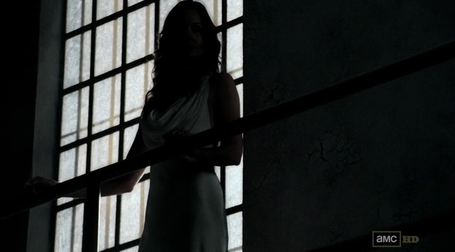 Rick has officially gone off the deep end. I was talking about it with my wife yesterday, and I think the show missed a golden opportunity by showing Lori. I think the scene could have had a much bigger impact if we saw Rick stare up into the balcony, then the shot of the balcony showed absolutely nothing. Then, when Rick loses his mind, the audience would have been thrust into the same shoes as everybody else in the group, taken aback and thinking "what the heck is going on?"

Either that or this...

Hopefully, in this episode, Rick will get some sleep.

The Walking Dead airs on AMC at 8pm CT.