A Cut Above: Offensive Production in the Saban Era - Part 1

Share All sharing options for: A Cut Above: Offensive Production in the Saban Era - Part 1

Alright, folks. It's time for another new series. "A Cut Above" will be a weekly piece for the next couple of months and will ultimately focus on trying to predict the Tide's statistical performance for the upcoming season. The analysis will be broken down into three parts for both offense and defense, and then another article focusing on turnovers.

Today, we will look at the raw statistics of how the Crimson Tide offense has fared under Saban and try to determine what meaningful trends exist. All stats taken from cfbstats.com.

First off, here are all the raw numbers that we will be working with. 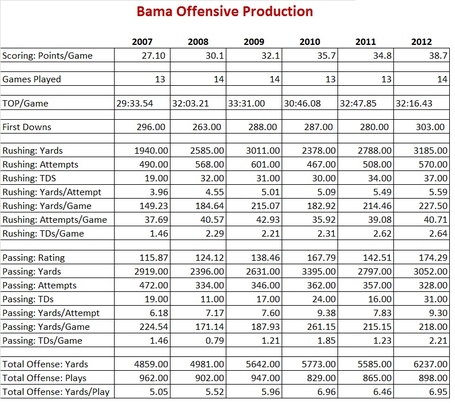 The very first thing that jumps out is the consistency of growth and production in Alabama's ability to score. The defense has gotten the lion's share of the press under Saban's watch, but the Crimson Tide offense has quietly become a machine in its own right. 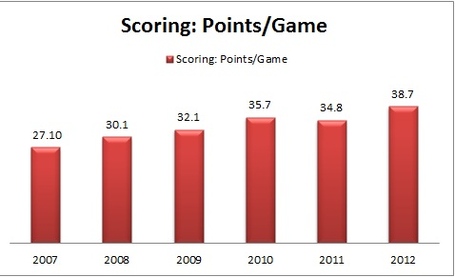 In Saban's debut season, the scoring offense ranked in the bottom half of the country. By the end of the following year, the Tide had jumped from 64th to 35th. Since then, the Tide has fielded a top-tier offense every year, ranking 21st, 18th, 20th, and 12th, in 2009-2012, respectively. While it is important to remember that Nussmeier was arguably working with the best offensive line in the country last year, it's safe to say that his first season at the Capstone was a resounding success, as he helmed one of the best offenses Bama has fielded in the modern era.

Next, let's take a look at total yardage: 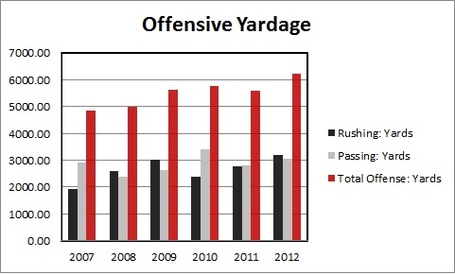 How is that for a balanced attack? In the last two years, the combined difference in passing/rushing yardage was less than 200 yards. It is interesting to note that the two seasons with the biggest disparities between passing/rushing yardage (2007 and 2010) happen to be the two most disappointing seasons under Saban, from a record standpoint. Those two years also happen to be the only times that there was an appreciable difference that skewed towards passing yardage rather than rushing yardage. On a broader note, the total yardage trend almost runs perfectly in tangent with the scoring chart, trending upwards at an average rate of 5.30%.

Next, we'll take a look at yards per play: 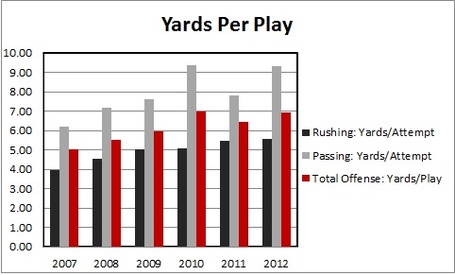 Once again, the general trend of yards per play roughly follows the same line as the other metrics we've looked at, growing at an average rate of 6.88%. The one notable exception here is rushing yards per attempt, which is the only metric I looked at where there was improvement over the previous year every single year since '07, with an average growth rate of 7.25%. That is a fascinating find to me, especially considering the growth continued for three straight years after a heisman-winning performance from a running back.

Next, we'll take a look at touchdown production: 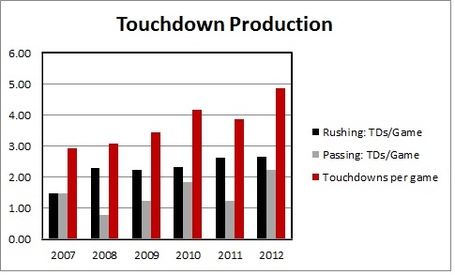 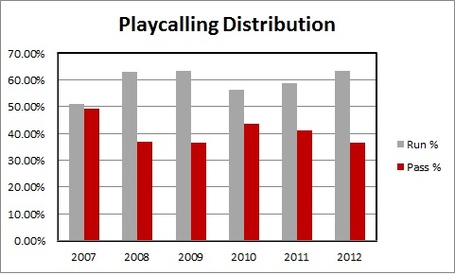 It would seem that Bama's reputation as a running team is well deserved. On average, Bama runs the ball roughly 60% of the time (roughly 61% if you exclude 2007). Yet again, when we look for the outliers, we see that the two years with the lowest rush rates happen to be 2007 and 2010. This graph will play a larger role in part three of our offensive-minded series, when we try to predict the 2013 statistics.

Overall, it looks like we should be giving a bit more attention to the job that Saban has done on offense. While the team's identity has been inextricably tied to defensive production under Saban, he clearly is not content with simply maintaining on offense. Every major metric has a positive trend, with average growth rates ranging from 5% to 11%. A large portion of this growth is undoubtedly attributable to roster development. This past season, after all, was the first season where only "Saban guys" were on the roster, as the 2008 class was the first that he assembled on his own. Moving forward, it will be difficult to maintain the growth rates of the past six years, since each year Bama will be simply cycling out one star-laden recruiting class for another, rather than phasing out the vestiges of the previous regime.

Tune in next week, where we'll take a look at what the returning depth charts looked like in 2008-2012, and try to project how the losses this year might impact the 2013 team.