The Verge of Puckin' Greatness

The Frozen Tide are on a Championship Run

Share All sharing options for: The Verge of Puckin' Greatness

A huge Roll Tide is in order for Greg Dawkins who so kindly offered his passion and knowledge of 'Bama Hockey to teach us laymen a thing or two about the Frozen Tide (gawd I love that). He's a great twitter follow (@gbdawkins) and knows his 'Bama sports. Hopefully you'll enjoy it as much as I did.

In an era when "student athlete" gains a snicker, the men of The University of Alabama's hockey team shell out $1200 of their own money to participate in the sport they love. Hockey? A hockey article? The hell you say. Settle. They have knocked off Central Florida, the #1 team this year (Division III), and are headed to the National Championship tournament in Springfield, Missouri on March 12th. And their sweaters (that's hockey for "jersey")? They look sweeeet. Get some. 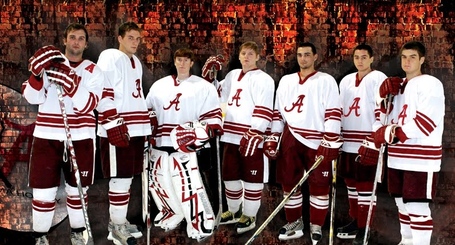 Alabama hockey began eight years ago with 15 students who wanted to play. And so it began, with a makeshift team and two games. In the years since, approximately 200 students try out to make the 30 man roster at the beginning of the school year (Bamahockey.net/team/prospective players). Last year, the team made Nationals, and this week they defeated conference favorite Arkansas to join Ole Miss in the field of 16 that will compete for the national title.

Coaches Mike Quenneville and David Noble graciously agreed to answer a few questions about our team, where it has been, and where it is going. According to Noble, "The University of Alabama Hockey team is organized as a club under the university athletic system. All SEC hockey teams are organized this way. We compete against over 400 other Universities across the country in the American Collegiate Hockey Association." Quenneville added, "Even though it is a club, University of Alabama Hockey team is hardly a club. Running a budget of well over $100,000, drawing fans in excess of 3,000 to some home games, and wearing the script A on our jerseys are all factors that make hockey immediately stand out."

Speaking of support, coaches Q and Noble have embraced The University's "Culture of Championships" that coaches Patterson, Potter, and Murphy have cited as a crucial element in the success and national prominence of the gymnastics, golf, and softball teams, respectively. "From day one of the coach Quenneville era, Bama Hockey has been designed to win the last game of the year. Our recruits, our schedule, our philosophy is that we are here to give these young men a chance to represent their school, and to win championships," Noble said. In short: it's a process, if you will.

Bama Hockey's coaching staff is the first to give credit to the University and its fan base as critical aspects of their success in building a championship calibre program in just eight years. According to Quenneville, "we built the organization that would be attractive to top tier players from all over the country and Canada. Then, we built a fan base. Good hockey players want two things: organized hockey & people to watch them play. With that said, our success is tied to the work of Dr. Witt & Dr. Bonner to grow the reputation of the University of Alabama as top tier university across the world. Without their work, this wouldn't have been possible." Noble added, "our players have the best and greatest support of any team in the South. Only a few teams in Michigan compare to the amount of support we get." When asked about the fan experience, Noble explained that "Bama Hockey is a family experience. Lots and lots of kids. We are the entertainment of choice for young University of Alabama families in the Birmingham area. At $5 a ticket we are cheaper and more fun than the movies."

While Quenneville stopped short of declaring Bama Hockey the favorite heading into the National Championship tournament, it is clear that this team is nobody's loveable underdog. While California University (Pennsylvania) and the schools from Michigan are probably the favorites, Coach Q added, "our chances our good. We have a very strong team. We have beaten the number 1 ranked teams from the North & South this season already. If we can pull together for that week and consistently play the hockey we are capable of, it will be up to the other teams to stop us."

Note: you can join the Bama Hockey Booster club for $100 and receive a $75 credit for merchandise from the club at BamaHockey.net