Built by Bama - Proving They Can be One of the Best

"We have the best fans in the world," UA head coach Sarah Patterson said. "They are so loyal and bring such enthusiasm and excitement to Coleman Coliseum. Our ladies love to compete for them."

Share All sharing options for: Built by Bama - Proving They Can be One of the Best

Alabama posted a season high 197.650 to secure its 106th consecutive win against the Tigers.

Watch this video, I would pay ANY of you guys to do the things those women do on those floor routines without ending up in traction. While you're watching, look for our SEC Gymnast of the week senior Ashley Sledge. Sledge posted season-best scores of 9.9 on the vault, uneven bars and floor exercise against Auburn, leading Alabama to a season-best 197.650. The Crimson Tide's total was the highest score in the nation last week. 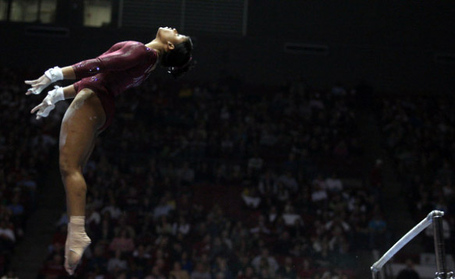 After the sixth meet of the 2013 season, the two-time defending NCAA Champion Alabama gymnastics team leads the nation in both average attendance and single meet attendance.

After home meets against LSU, Kentucky and Auburn so far this season, Alabama has averaged an NCAA-best 14,519 fans per home event. The Crimson Tide's crowd of 15,075 fans for the annual Power of Pink meet vs. Kentucky on Jan. 25th is the largest in the nation this season and was the 10th sellout in school history.

While the Pac 12's Utah is ranked second in average attendance (14,485), the rest of the top five comes out of the Southeastern Conference with Georgia averaging 8,477 fans per meet in third place. Florida is averaging 6,439 and Auburn 5,064 for fourth and fifth, respectively. 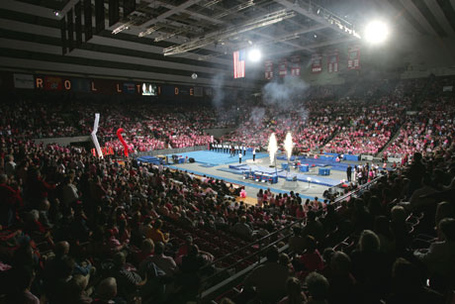 Alabama has also been the nation's top draw on the road this season, where it is averaging 7,916 fans per trip. Overall, through all six meets, three home and three away, Alabama is averaging 11,218 fans per meet. Utah is second in overall (home and away) attendance, with 8,788, giving the Tide an overall lead of more than 2,400 per meet.

The Alabama gymnastics team moved up to No. 4 in the national rankings after using a season-best score of 197.650 to beat Auburn last Friday. In addition posting its best overall score of the season, the Crimson Tide also tallied its best vault, balance beam and floor exercise scores of 2013.

Florida remained at the top spot this week after beating Georgia on the road last week. Oklahoma and Michigan took the second and third spots, while UCLA dropped to No. 5. The Tide will close out its regular-season home slate with both the Sooners and the Bruins. 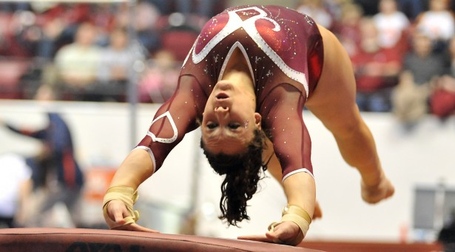 Junior Sarah DeMeo retains her seventh place ranking in the uneven bars, with seniors Ashley Priess andAshley Sledge checking in at 16th and 19th, respecitvley. Sledge also moved up to No. 22 in the floor exercise, after tying her personal best with a 9.900 against Auburn.

After taking on Arkansas on the road this Friday, the Tide will return home to face fifth-ranked UCLA. Tickets are available now through the Alabama Ticket Office (205.348.2262) located in the lobby of Coleman Coliseum or online at RollTide.com.