Last week, Rick wandered alone in a swamp for 50 minutes, solidifying his position as mayor of crazy town. For anyone that didn't watch The Talking Dead last week, Robert Kirkman made it a point to clarify that Lori is not a "ghost", but is rather some idealized mental projection by Rick's damaged psyche. I was just surprised ghost Lori wasn't a zombie.

Glenn and Maggie are still frustratingly at odds. Seriously, why didn't this trauma drive them closer together? Also, apparently the director watched the Star Trek reboot on loop before filming the episode, because LENS FLARE.

It only took Darryl 5 minutes in the woods with Merle before he remembered that his brother is a grade "A" dirtbag. We found out that Merle and Darryl had daddy issues, and both headed back to the prison in time to save Rick, but not in time to save Axel, who had the most surprising death of the series so far, for my money. At least Carol was able to make the best of the situation. 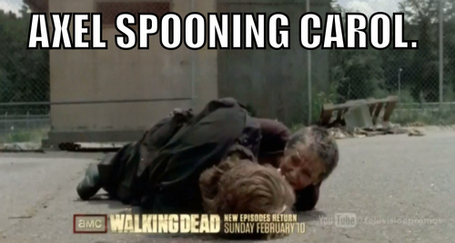 Axel's death signaled the beginning of an attack by the governor, which seemed to be more a show of force than an actual siege. The governor was able to test the group's defenses, get an idea of how many people were in the group, and test out a new toy, the zombie bomb, while only sacrificing one guy (even if he was a ninja).

I suspect the episode title applies to Merle, who will pledge his allegiance to the group to stay with his brother. As the banner image shows, the group clearly anticipates another attack, though I would be surprised if the governor struck again so soon.