Roll GymTide Roll : Kiss Your Sister and Rankings Get Complicated

Patterson is pleased with results but sees room for improvement.

Share All sharing options for: Roll GymTide Roll : Kiss Your Sister and Rankings Get Complicated

This past Friday Bama scored its second-highest score for the season and stayed at No. 4 in the nation. Bama tied with No. 19 Arkansas as both teams posted scores of 197.100. While tying may be like kissing your sister in most other sports, it was the Crimson Tide's highest road score of the season. Despite the 197-plus score, the Tide experienced some adversity at the end of its floor exercise rotation when senior Marissa Gutierrez had an awkward landing on her first tumbling pass and had to be carried off the floor. 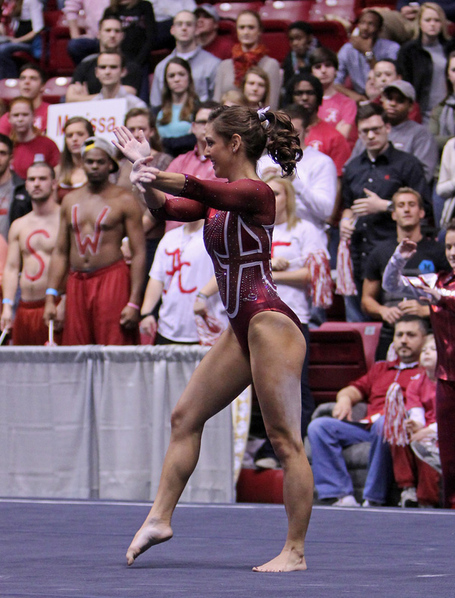 All-American Marissa Gutierrez works floor for a 9.30 against LSU earlier this season. via www.gymtidemedia.com

"We had to go to beam right after Marissa got hurt and I told our ladies `We're going to do this for Marissa,'" Patterson said. "I'm proud of how we responded."

As of this week the scoring makes the switch to the end-of-season Regional Qualifying Score (RQS). This formula takes a team's top three road scores, its next three highest scores home or away, drops the highest score and averages the remaining five.

I'm sure someone with a higher pay grade than me came up with this ranking system but frankly it makes my head hurt just to think about it. I'm sure I am not the only one as Florida lost its No. 1 ranking to Oklahoma after RQS was applied and dropped to second. Michigan remained in third and LSU knocked UCLA out of the fifth.

There will be a good bit of mixing it up over the upcoming weeks with Bama meeting with UCLA this Friday then traveling to LSU to take on the Tigers for the second time next week in Baton Rouge, La. Bama will then return home and close out their regular season against the currently ranked No. 1 Sooners on March 15. I will do my best to both explain and post the ever changing rankings leading into the regionals, SEC Championships, and NCAA Championship meets.

After beating Auburn on Feb. 15, Alabama has now posted 32 consecutive home wins. Alabama's last loss in Coleman Coliseum came against LSU on Feb. 13, 2009. The Crimson Tide's home win streak includes a 22-0-0 regular season mark and a 10-0-0 record as host of the 2009 and 2011 NCAA regional championships. What a streak, right? We could very well end this season with 35 consecutive home wins.

I can't believe the season is already coming to a close. There are still tickets available for both of Bama's final home meets. If you're close enough to T-town to take in a meet, these last two would be perfect, especially with the rankings changing and placing Okie at No. 1 for our final home meet. I'd love to be able to report yet another sold out meet for our GymTide!