*Note: 2011 marked the first year of the field of 68, including the first round of 4 teams for the play-in games.

As Alabama continues to fight for a spot in the NCAA Tournament following a rebound win against Auburn, we thought it would be interesting to compare this 2013 team with the last 4 teams in over the past few tournaments in a few key RPI related categories. We have discussed before the importance of the RPI power rating to the Selection Committee and how crucial it is for a team to have a solid RPI in order to make the tournament. To this end we will look at the 2009 - 2012 last 4 at large teams and how the Tide matches up in 3 key areas: RPI and RPI Ranking, Conference RPI and Conference RPI Rankings, and Strength of Schedule.

Interestingly enough, we are 1/1000 point higher than the average of the Conference RPIs over this time frame, but ranked nearly 2 slots lower. Is this significant? I think so. The average RPI of the top 4 conferences this season, 0.581, is significantly higher than the top 4 Conference RPIs in 2012 (0.569), 2011 (0.568), 2010 (.574) and 2009 (0.578); meaning this year the overall level of play - dictated by this stat, anyway - is of higher quality than in recent history (derived from comparing actual RPIs vs RPI rankings, which can be deceiving for this very reason).

Now let's take a look at team RPIs over this same time frame. After the Auburn win Tuesday night, Bama stands at an RPI of 0.567 (beating Auburn cost us a 1/1000 RPI point and 1 spot in the rankings), good enough for 63rd nationally. While we are tied with Kentucky for second in terms of wins & losses in the SEC, we are 6th in RPI rankings behind UF, Mizzou, UK, UT, and Ole Miss. Comparing RPIs to the last 4 tourney teams over the past 4 years, we see that Alabama is significantly behind the average in terms of both RPI (0.567 vs 0.583) and ranking (63 vs 44.6). With the exception of a couple of outliers - 2011 USC (0.560, 73rd) and Clemson (0.572, 55th) - none of the last four at-large teams in recent history have an RPI ranked lower than 50th overall. Even then, only USC had an actual RPI lower than Bama has this year.

I've harped on the importance of RPIs to the NCAA selection committee vs other statistical measures. The Wall Street Journal's Ben Cohen sat down recently with Xavier AD MIke Bobinski, who is the committee's chair. A terrific insight into their thought process; head on over for the full article, but here are a couple of excerpts relative to our discussions:

The committee says that the Ratings Percentage Index (RPI) is just one of the tools that it uses for selection. It seems to be the benchmark used most often even though it has been criticized. Why do you think the RPI is the best evaluative metric?

Whether it's the best is a matter of opinion. I've become more comfortable with our use of it over time because I've really come to know now that I'm in the room that we don't ever pick teams based on their RPI. We don't ever look at teams and say, their RPI is a certain number, therefore they must be in the field. It doesn't work that way.

We do absolutely use the RPI when we evaluate a team's performance against the top 50 or top 100 or their strength of schedule. It's absolutely a tool we use to organize the field. We use it to group teams in certain ways. That's undeniable that we use it from that perspective. What people sometimes believe is we use the RPI as a selection tool, and we never, ever do that.

It's a consistent way of organizing the data and slicing and dicing things, but we look a lot deeper than that.

Most of the smartest analysts of college basketball prefer metrics other than the RPI. If the committee considers the RPI one of the most reliable systems, why do so few others use it?

I think part of that is certain folks gravitate toward other ranking systems because of particular features they may prefer that may not be present in the RPI. Some people like margin of victory or different weighting on style of play.

I use a combination of different systems when I look at teams and also weigh that with my own observations. I want to see a team play and get a sense of who they are and how they look.

*Note: There are as many articles denouncing the validity of the RPIs accuracy as there are ones supporting it. You can Google these for yourselves, but my focus is the Selection Committee's use of the ranking as an evaluation tool. 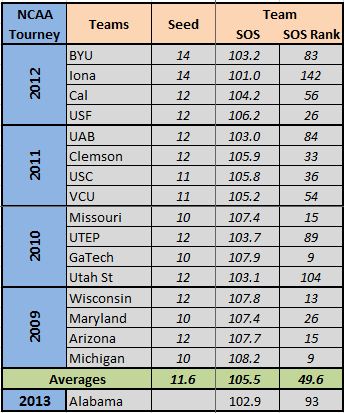 The Strength of Schedule is an interesting indicator. There are severe outliers - 2012 Iona and BYU, 2010 UTEP and Utah St. - and the average of 49.6 is significantly lower than Bama's current SOS of 93 when you look at the past four seasons. However, looking at the previous 2 tournaments since the inclusion of the field of 68, we get a different result: 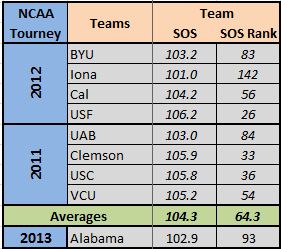 Not significantly different, but it's an average of 15 points higher. Further, food for thought: 2012 BYU won 25 games, and of it's 7 regular season losses only 4 were to unranked teams, with the worst RPI loss to Utah State (132nd). The Cougars lost to St. Mary's (29th), Gonzaga (22nd), and Loyola (109th). In comparison, Bama has losses this year to 4 teams with current RPI rankings below 120 (including that loss to 219th ranked *coughauburncough*)

With Alabama amazingly in 2nd place in the SEC heading into a showdown with Florida Saturday, our tourney chances will continue to spark debate amongst the Tide faithful until selection Sunday. Let's hope for the best as this SEC season is, simply weird. Roll Tide!