Talking Tumbling With the Alligator Army

Bama rolls into Gainesville to face the No. 1 Gators. Intensity and focus is the bottom line.

Share All sharing options for: Talking Tumbling With the Alligator Army

This week No. 5 Bama is visiting No. 1 Florida in Gainesville after falling to UGA last week. It looks to be a tough match for Bama & Coach Patterson has had Florida top of mind for a while. "Florida is the most talented team in the country and have been for a while now," Coach Sarah Patterson said. "I've had them at the top of my preseason ballot the last three or four years. It's going to be a challenge, but we've worked hard this week to take steps forward." 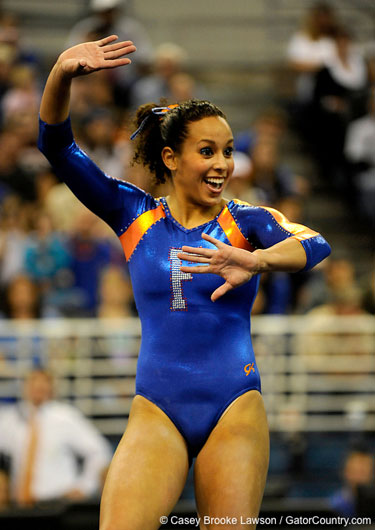 Gator Gymnast Miranda Smith vs Bama in 2009 via www.gatorcountry.com

We reached out to Alligator Army this week for a little Q&A. What follows is my set of questions for them and once I get their questions for us I'll post a link to their post about our girls. Be sure to check out the links for more info about their gymnasts and other fun. Without further ado....

Q: Every team has a few "specialists" on each event. Who would you consider the "Gymnasts to watch" for each of your events? Who is your best All Around? And of course, who has the best or unique, crowd pumping floor routine?

A: I love watching Kytra Hunter, period, because she's so powerful, and she's not the reigning NCAA all-around champion for nothing. She's best at the vault and floor exercise, and a contender to win each every meet. Mackenzie Caquatto has a 10 on the uneven bars and a 9.95 on the beam this season, Ashanée Dickerson has a 9.975 on vault and three 9.9s on the floor, Bridget Sloan had a 39.55 last week against Arkansas, and Marissa King won the NCAA vault title and has a 39.50 this year. So the answer to the first question is everyone, and that's also the answer to the second one, because all the floor routines have Gator Chomps sprinkled in, and the Gainesville crowd goes wild for them.

Q: After placing second in the Super Six at the NCAA Championships last year (the highest since 1998), I'm sure the team was ready to get started on routines and ready to focus on how to get back to the championships again this year. What has the 2013 season been like for Florida so far?

A: It's been very good: Florida rebounded from a rough night at LSU with two falls on the beam (from former Olympian Sloan and senior King), its only loss on the year, with three straight wins on scores at or above 197.300, and recorded the nation's best score so far, a 197.65, against Auburn two weeks ago. Things are shaping up for the currently No. 1 Gators to make another Super Six run and, perhaps, claim the program's first national title.

Q: What will the Gators have to do well in order to win this meet against Bama?

A: I think it's really just execution. If Florida can avoid counting a fall, there are more than enough 9.9s in the Gators' pocket to outpace any team, and Florida being at home should help with confidence against another really talented squad.

Q: The next few weeks has Florida on the road against the Gym Dogs then back at home against Kentucky. That's a rough SEC schedule. Is everyone healthy and do you believe Florida will still be ranked at number one after that tough run?

A: As far as I can tell, everyone's fairly healthy, and Florida has enough depth (Hunter, Sloan, King, and Dickerson all have 39.5+ all-around scores this year, and could win an all-around on a given night; Alaina Johnson, maybe Florida's most graceful gymnast, has posted a 39.30) to beat anyone and anywhere. The Gators dropping a meet to Georgia wouldn't be a stunner, but dropping a meet doesn't matter that much, and neither do the rankings, for a national title contender. If I had to bet, Florida's going to go 2-1 over this stretch against 'Bama, Georgia, and UK, but I don't know when the loss will happen.

Q: Both Alabama and Florida have had trouble winning as the away team in a regular season meet in Tuscaloosa or Gainesville since the 90s. Is there anything Bama could do to step up or prepare for the meet and score a win in Gainesville to break this hoodoo?

A: They could try to bring along the LSU fans who had Sloan shook in her first SEC road meet, but I'm not sure anything else is going to do the trick. Alabama needs to execute to beat a team with as many solid scorers as Florida, and that's going to be hard in the O'Dome.

Q: For Bama fans who have never attended a meet in Gainesville, could you describe the atmosphere in The O'Connell Center and what makes Gators gymnastics so exciting?

A: I've only been to one Florida gymnastics meet in my life, and I was blown away by how fun it was. There's a good chance attendance will be over 7,000 tonight, and it's going to feel like about half of that number is girls from the age of 8 to 13. The crowd is loud and animated and really gets gymnastics, and Florida does a very good job of feeding off of it. If you're headed to the O'Dome tonight, you're gonna have fun for a couple hours.

Coach Faehn has done amazing things with the Florida gymnastics program, has been honored as SEC Coach of the Year three years in a row and brought quite a bit of expertise with her to Florida when she became head coach 10 years ago. Just last week I was doing my share of po' mouthing about Florida and their tough schedule coming up, but to be honest... I believe that they are a much more formidable opponent than I had given them credit for as I had not done my research before making that statement.

We'll have an open thread tonight for the meet, you can listen to the meet live on WUVA FM Here, there is also Play-by-Play commentary Here for each meet. The meet starts tonight at 7p.m. ET. We'll open up the thread about 15-30 minutes before the meet begins.

Thanks again for the support! Roll Gym Tide!!