Rounding into form is a series that focuses on one player who is destined to have a huge impact on the Crimson Tide Football team in 2013. This week we cover Senior defensive back Deion Belue.

Share All sharing options for: Rounding into Form: Belue Collar

When Deion Belue came home to Tuscumbia from visiting the University of Alabama in January of 2010, he had no doubts about where he was going to play his college ball. He talked of the 2009 National Championship celebration, and what it would be like to take part the next year. "I really believe that we can do it again next year and I want to do everything I can to help it happen." His mother had been sold on Alabama from the beginning, and other family members that had gone on the trip had their eyes opened. He explained to the media Coach Saban's future plans for him in the defensive backfield and maybe as an heir to Javier Arenas as a kick returner. His optimism must have been contagious at the time, but looking back from the spring of '13, we all know that Deion's journey to starting Corner for the Tide was much more convoluted.

It's impossible to know what would have happened had Belue qualified in 2010, but with Dre Kirkpatrick, Menzie, and Milliner all playing significant roles in '10 and '11, there was not very much room for another young player to see time. When Deion entered spring practice in '12, this was not the case. Kirkpatrick, Menzie, and Phelon Jones were all gone, as was star safety Mark Barron, leaving ample opportunity for a new starter to emerge. With Milliner in line to start at one Cornerback position, the battle was between two JuCo players, Belue and number 1 ranked Juco CB Travell Dixon.

Any ardent supporters of the Crimson Tide know his story from here. Belue turned heads in spring camp, enough to be in the driver's seat for the starting position. Then his place was solidified with the transfer of Dixon to Washington citing "family reasons". Opening the 2012 season, most of the fans' and media's concerns about the Alabama team were rightfully placed in the defensive backfield. Looking back, to call the position group a weakness is neither right nor wrong. Technically, this was the weakness of the Alabama defense, but with Milliner having a breakout year, Belue and Clinton-Dix developing in their respective spots, and depth in the forms of John Fulton and Geno Smith coming into their own later in the season, the defensive backfield was very stout, and would've been a strength of perhaps any other team in the SEC on the defensive side of the ball, save for maybe LSU and Georgia. The general fan/media concensus concerning Belue was that he got beat several times, was caught with his back to the qb at times, and was a liability in run support.

While this is not incorrect, it does not spell out the whole truth. If you go back and watch tape from the '12 season, you can see a definite progression in the comfort level exhibited from Deion. Also of note, teams did not throw at Belue a whole lot this year, contrary to popular perception. What this tells you, I'm not sure. Whether simply a coincidence or opposing teams thinking they had a better shot to complete balls against other cover men, there is no way to tell short of calling the opposing head coaches and asking for game plans. What follows is a perception vs. reality comparison revealing the strengths and weaknesses of Belue's season, and this will hopefully help shed some light on what to expect for '13.

Perception: People will remember the big play to Jeremy Gallon late in the second quarter, and cite it as evidence that Belue was not ready for the big stage. When the ABC camera panned down the field, Gallon was 5 yards behind Belue and racing toward the end zone. 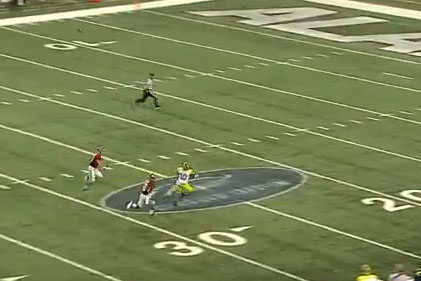 Reality: When looking at the replay, Belue turns expecting a deep out (image below), but was fooled as Gallon simply faked out and continued the fly. Belue also knew that he had safety help over the top, so leaning on the out would not have normally been quite so catastrophic. The problem was that his safety help was in the form of Vinnie Sunseri, who bit on a shallower cross and is slow to get to the play. Even with Belue turning upfield expecting the out, he still has the speed to catch up to Gallon and make an attempt on the tackle. Moreover, this was the only ball thrown at Belue all game that the reciever came down with. He was targeted only 4 times, and generally was in position well enough, especially for a player making his first major college start. As is a theme that continues throughout the season, Michigan thought they would have more success going at Milliner, as they threw his direction many more times (and paid dearly). 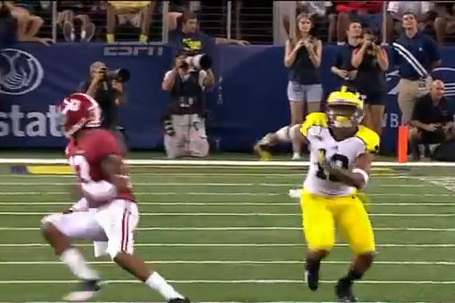 Perception: Belue missed tackles, he was constantly targeted by the LSU offense, and he allowed the TD to Landry in the 4th that gave LSU the lead. 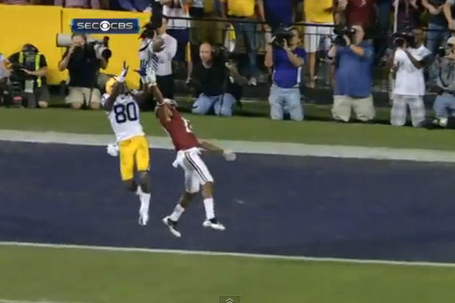 Reality: The first and last are true, but Belue was only targeted 6 times, allowing 3 completions, including that TD to Landry. The first completion was at the very beginning of the game on a quick slant for 7 yards and a first down. The second was the aforementioned TD to Landry. Look at the image on this one. Belue postions himself well, finds the ball, and makes a play on it. Mettenberger made a pretty sensational throw to Landry's back shoulder, and Landry made a good twisting catch for the score. The third and final completion that Belue allowed was to Odell Beckham late in the game to sustain LSUs final drive. Again, look at the image, Belue is in position, turns, sees the ball, and makes a great play on it. The fact that Beckham came down with it is nothing short of amazing. 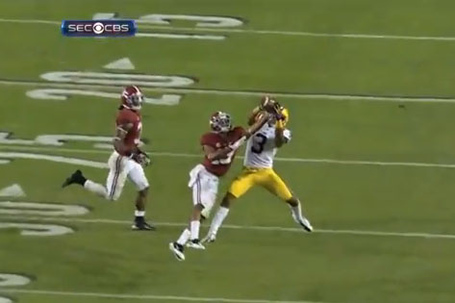 A small note on Belue in run support. There were not many times during the '12 season that Belue was forced to make tackles on RBs, but the amount of time that LSU had the ball and the great job LSU's Lineman were doing allowing players to get to the second level forced him into action many times. In fact, 8 times Belue was involved in a tackle, which is far more than any other game that was studied for this piece. One in particular was a dump off to JC Copeland in which Belue missed the tackle badly. He tried to spear Copeland's legs, Copeland bounced off, and rumbled for 40 extra yards before Belue caught up with him. I think rather than faulting Belue for his tackle attempt, we should just hope that the 180 lb corner will not be tasked with taking down a beast like 272 lb Copeland again.

Perception: Belue was a part of the Bama secondary that allowed Johnny Manziel, Ryan Swope, and co. to torch them early, and allow just enough late for them to hang on for the win. Not only that, Belue provided Johnny Football his "Heisman moment", with his stiff arm, that was shown on ESPN a hundred times leading up to the Heisman ceremony and throughout the season. 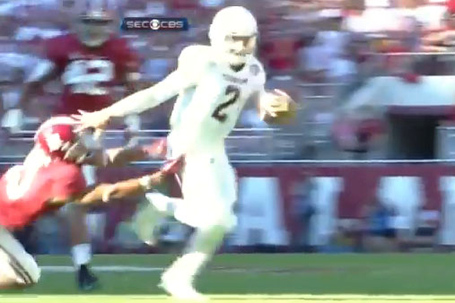 Reality: While the stiff arm happened, Belue getting torched certainly did not. In fact, Belue was only targeted 1, yes one, time the entire game. It was on a crossing pattern to Uzoma Nwachukwu (Gesundheit!) that Manziel overthrew. Watching the game film on this one, it becomes crystal clear early what Sumlin and the Aggies were trying to do. They targeted safeties, linebackers and depth chart names in Alabama's secondary. Belue was thrown at once, and Milliner only a few times as well. Most of Manziel's stats came against John Fulton (who started playing phenominally late in this game after a few ugly plays earlier) and Vinnie Sunseri, who was relieved of his slot coverage duties by Fulton and Geno Smith in the second quarter. Point being, Belue was a non-factor in this game, because A&M played away from him.

Perception: Taverres King man-handled Belue, had a huge day for Georgia, and Belue's lack of ability to cover him almost cost Bama the SEC title. 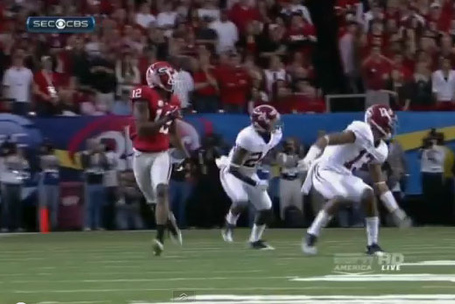 Reality: While King did have a great day, 5 catches for 142, Belue was only covering him on three of those catches. In fact, Belue was targeted only 4 times in this game. The first catch was a back shoulder throw, where King allowed Belue to think he was running the skinny post (see image above) and then Murray put the ball on the sideline. King turned and made the catch before Belue could react and get there in time. Great pitch and catch on a difficult throw from an experienced tandem in Murray and King.

The second catch was a 10 yard button hook by King. Again, he turned and the ball was there. There is not much a corner can do when the QB puts the ball at the Wideout on his break.

The third catch is very much like the first. A 25 yard back shoulder throw to King. This time, Belue is in much better position to make a play, perhaps having learned from the earlier throw, but his back is to the ball giving King the advantage. King uses his hands to create separation before turning out and, again, finding the ball placed right where he can get it and no one else can. This play I believe is also the source of the fan and media perception that Belue lacks the ability to turn his head and find the ball (see image). But if you go back to the first image against King, you see there he does have his eyes back to the ball, even though doing this caused him to lose the reciever and essentially take himself out of the play. 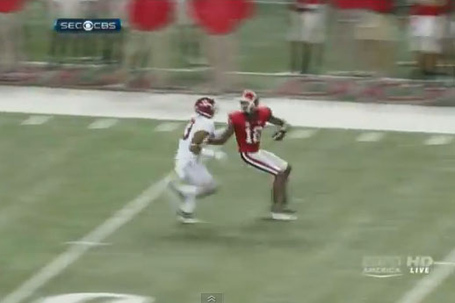 When watching the highlights on Belue, or any young player, it is far less troubling to see a technical error than a physical limitation. The fact that Belue misread a route is one thing, and with another Spring under his belt, those errors will inevitably melt away. But it is far more concerning to see a player get beat on pure speed, which was not and will not be the case with Belue.

Deion is clearly still a work in progress, but he is not as far off as some want to think. He is not a beast in run support like Dre Kirkpatrick, Barron, and to a certain extent even Dee Milliner was, but he has the speed and ability to become a shut down cover corner like Milliner. Dee excelled at running with recivers, turning and finding the ball, and then making a play on it. He had many, many opportunities to prove it this year and did just that, and that is why he will be a top ten pick in April. But many forget that Milliner was a clumsy freshman in '10, sometimes blowing coverages. He went from there to slot corner in '11, behind Kirkpatrick and Menzie on the depth chart. Then he blossomed into an All-American and team leader in '12. After watching the tape, it would not surprise me to see Belue follow suit in 2013. 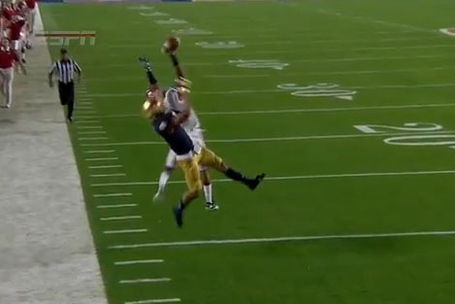