The Crimson Tide moved up to No. 4 this week and will face off in Coleman Coliseum against No. 1 ranked Oklahoma for the regular season closer. It is also Senior Night for the Crimson Tide and it will be extra special for one of our girls.

After a standout performance against LSU last Friday, Alabama senior Ashley Priess has been named the Southeastern Conference Gymnast of the Week the league office announced on Tuesday. 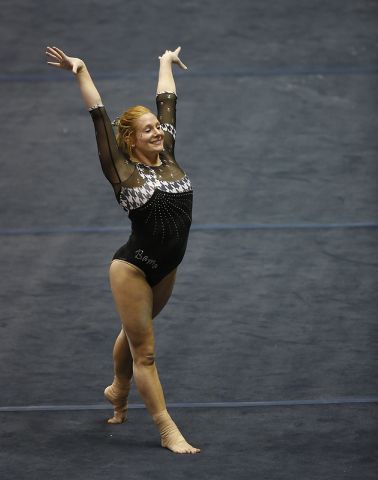 Ashley Priess after her floor routine vs UCLA via static.ow.ly

The Wheaton, Ill., native clinched Alabama's victory over LSU by winning the balance beam with a 9.95, a season-best for Priess and the Tide on the beam. It also tied Priess' career-best mark on the event. Priess also won the uneven bars, tying her career best of 9.925, which was the Tide's highest score on the uneven bars this season.

The Crimson Tide will face newly crowned No. 1 Oklahoma to close out the regular season this Friday in Coleman Coliseum.

Rankings are calculated by Regional Qualifying Score (RQS) at this point in the season. The formula takes a team's top three road scores and its next three highest scores, home or away. It then drops the high score and averages the remaining five.

Oklahoma jumped idle Florida to reclaim the top spot, leaving the Gators at No 2. Michigan retained its third-place ranking for the seventh-consecutive week, while LSU dropped to No. 5 after falling to the Tide.

After posting its highest road score of the season on the balance beam, the Tide moves up to claim the No. 2 spot nationally. Alabama is ranked third on the floor exercise, fourth on the vault and sixth on the uneven bars.

Junior Kim Jacob, ranked 16th in the all-around, moved up to No. 4 on the floor exercise and No. 9 on the balance beam, after tying or exceeding her season-high scores on both events last week.

Senior Ashley Priess moved up to claim the No. 13 spot on balance beam, following her 9.950 against LSU, which tied her career-best. Junior Diandra Milliner is 13th and senior Marissa Gutierrez is 23rd on the vault this week.

Milliner also moved up to No. 12 on the floor exercise, after posting her third consecutive score of a 9.9 or better last week. Junior Sarah DeMeo is ranked 17th on the uneven bars, while senior Ashley Sledge moved up to claim No. 25.

Alabama closes out its regular season this Friday in Coleman Coliseum against the top-ranked Sooners. The Tide will recognize Becca Alexin, Gutierrez, Sledge and Priess in Senior Night ceremonies prior to the competition.

Y'all try to make it to Coleman on Friday if you can. I won't be able to make it this weekend but I am going down for NCAA Regionals and can't wait. While the atmosphere won't be quite the same as being host to a home meet at Coleman, it will still be awesome to be at home with our girls. I can't wait to introduce my daughter to the inside of the coliseum, I hope she loves it as much as I do.

Out of the top6 teams in the nation, 4 will be in Little Rock in 2 weeks for the SEC Championships. In all, 7 SEC teams are in the Top 20.

Only one more regular season write up to go this year and then we're on to the difficult task of trying to explain rankings and scoring for regionals and nationals. I hope you all have enjoyed this series and I hope to still be here for next season with even more support from within our ranks. Roll Tide, Y'all!!