Tide Crush Huskies to Advance to NIT Round 2

Share All sharing options for: Tide Crush Huskies to Advance to NIT Round 2 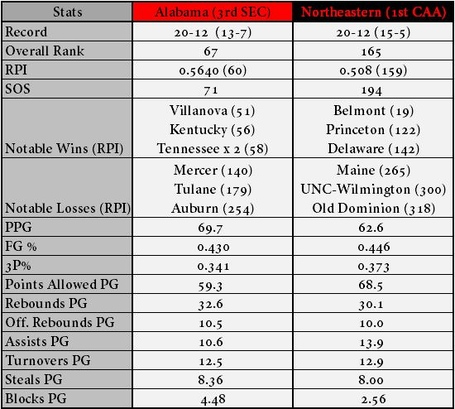 NIT #1 seed Alabama Crimson Tide kicks off its postseason play tonight as #8 seed Northeastern University Huskies visits Tuscaloosa to kickoff the 2013 National Invitational Tournament. Alabama, of course, enters the game off a disappointing season, losing 3 of their last 4 regular season games (including a 3OT loss at LSU) and a loss to UF in the SEC tournament after leading by as much as 10 points in the second half. The Tide had several chances to make a case for an NCAA Tournament bid during the last stretch of the season but struggled in long offensive stretches that prevented the team from sustaining 2nd half leads against Auburn, LSU, and Florida (twice). Foul trouble and poor shot selection, along with questionable game management, contributed to these offensive droughts.

Northeastern finds themselves in postseason play for the third time in the past five seasons. The Huskies finished 2013 as Colonial Athletic Association (CAA) regular-season champions as well as an appearance in the CAA Tournament championship game, losing to James Madison 57-70. Head Basketball Coach Bill Coen, USBWA District 1 Coach of the Year, is a finalist for the 2013 Hugh Durham National Coach of the Year Award, given annually to the nation's top mid-major coach. The Huskies are led by senior guards Jonathan Lee (13.8 PPG, 4.0 APG) and Joel Smith (16.1 PPG) along with Sophmore Quincy Ford (12.4 PPG, 5.7 RPG). Sophmore Reggie Spencer leads the team in rebounding at 6.1 RPG, and freshman guard Devin Walker is a CAA All-Rookie selection with a 2.4 assist-to-turnover average in conference play.

Tuesday night's game will be just the second meeting between Northeastern and Alabama; in the only previous match-up, the Crimson Tide defeated the Huskies, 88-73, on Dec. 4, 1979, in Tuscaloosa

The game will be a homecoming for sophomore Reggie Spencer; the Tuscaloosa native led Hillcrest High School to two Alabama Class 6A state titles (2008 and 2011) and was named the Class 6A state MVP in 2011

"One of our goals each season is to advance to postseason play, so we're excited to participate in the NIT. The NIT berth extends what has been a special season and gives us an opportunity to compete in a tournament and for a championship.

"Alabama had a successful season and will be a formidable opponent," Coen said. "They won 21 games, including 12 in the SEC, and played well at home. They rank among the top 30 in the country in scoring defense. We'll spend the next 48 hours preparing and will put our best effort out on the floor on Tuesday night. I know it will be a fantastic atmosphere in Tuscaloosa and we're looking forward to this opportunity."

"We're appreciative again for an opportunity to continue our season. We're thankful to the NIT selection committee for choosing us to participate in their tournament and giving us a number one seed, a chance to play at home. We have a very tough opponent in Northeastern. I had a chance to look at a little bit of film on them, and I'm very impressed with what I see. They were the CAA regular season champions with 14-4 in the league, and made it to the conference championship. They are led by a couple of veteran seniors that are very good guards. We have a short turnaround, and we have to get prepared for a very challenging game tomorrow.

"We're getting familiar with them. Again, we just found out our opponent last night. They're led by two seniors - Joel Smith, a two-guard that shoots the ball extremely well, very versatile, who scores in a variety of ways and leads them in scoring. And then Jonathan Lee, their point guard/off-guard scorer, gets to the free throw line, kind of the spark plug of their team, so to speak. But they've got a lot of really good pieces. Quincy Ford, a 6-8 small forward is pretty good; he's a guy that can shoot the basketball and put it down. They're about similar to us in size, in terms of they're not a very big team. They play pretty much four skill guys at all times. I think they led their league in scoring, one of the top teams in their league in field goal percentage, 3-point percentage. They're a team that I think led the league in steals. They're a team that presses in a variety of ways. A very tough, physical team. So certainly a lot to get prepared for."

On paper, this should be a relatively easy win. Northeastern, while regular-season CAA Champions, have had a few bad losses and only one RPI top-100 win which came against Belmont way back in November in the Great Alaska Shootout. Further, the CAA has no top-100 teams in the RPI rankings, and half of the teams (6) have an RPI below 200 (3 below 300). A strong showing in the NIT is going to be important to build the morale of this team heading into the 2013-2014 season (which RBR will take a more in depth look following the end of post-season play).

We all certainly hoped to see the Tide in the NCAA Tourney, but, frankly, we didn't have the resume this year following several pretty bad losses. However, the experience of the NIT is extremely valuable, particularly when one considers we return everyone next season. Let's get all our Voodoo going and hope our guys play the way they are capable of - and consistently - and storm through this tournament. ROLL TIDE!