Anthony Steen is a rising Senior and one of two returning starters from Bama's vaunted '12 Offensive Line. Here we review three games from Steen's 2012 season to see if we can find a clue about what to expect in 2013.

If you asked any Alabama fan who the weakest link on the Offensive Line was in 2012, you would most likely find your answer here. Anthony Steen should not take offense to that though, since the other four linemen he was playing with are likely to go in the first or second round of the NFL draft. For Steen, playing in the shadows of All-Americans has become a normal routine, and playing with a chip on his shoulder since being a consensus 3 star prospect, he finally has a chance to step up and make some noise of his own.

After playing O Line, D Line, and sharing the snapping a kicking duties at Lee Academy in Clarksdale, MS, Anthony accepted an offer to Alabama over such high profile schools as Miami and Florida State. After redshirting his first year, he was pressed into action in a few games in 2010 as the back-up right guard behind Barrett Jones. Beginning the first game of 2011, he became a regular starter at the position and has amassed 25 starts total through the end of the 2012 season.

2012 became a turning point year for Steen, who had struggled from time to time before that. In the minds of fans and media alike, he still has much to prove, as many speculate that Steen’s success was a product of having the Outland/Rimington award winner in Jones to his left, and the monster of a man Fluker to his right. Watching the film, you can definitely see where he had help many times, but that was not necessarily a product of lack of skill from Steen, but more so that the scheme dictated double teams. There are of course several examples where Steen was beaten on plays, as there were many examples of plays where Steen alone stymied some of the top defensive line players in the SEC. The overall sense you get when watching his tape, and I watched the LSU, Texas A&M, and Georgia games, was that Steen knows the scheme well. He puts himself in position to make the proper blocks seemingly on every play. He does not get penalized (not one in these 3 games, although without proper stats for the entirety of the season, we can only assume that the real percentage is very low based on this sample). And he does not allow sacks, being an OG helps in this regard, as DTs are rarely the primary pass rushers on the opposing defense, but important nonetheless.

There are however, a few weaknesses that will need to be addressed before he truly becomes the anchor on the right side of the line that we will need him to be. When going up against bigger players, he is susceptible to being bull rushed and put back on his heels, forcing him to backpedal sometimes into the heart of the play. While this didn’t cost the team much during these 3 games, sometimes it forced AJ to adjust or scramble. While not getting outright beat, he is still negatively affecting the play. Another problem is that while Steen was an asset pulling or slipping through the line to get to linebackers, sometimes after initial contact, the linebacker would free himself and go make the play. This issue would also appear from time to time even when he would not pull, although less often. On stretch run plays, for example, he finds and locks up his man well, but the defender is able to ride the block towards the play and either force the RB to change direction, or make the tackle. While these plays were rare, they did show up, specifically in the Georgia game, when Steen was matched up against 359 lb Johnathan Jenkins for most of the game.

To get a better grasp on Steen’s 2012, I have broken down and graded out the tape of the three games. These three games are good indicators, because they provide the only three games in which Bama starters played every snap, and all three had great defenses which contained multiple Sunday players. The grading scale used for offensive lineman is a very subjective measurement, but for full disclosure, I will explain my thought process. The statistical measurement is easy enough, the grade is the percent of blocking assignments accomplished vs. total offensive snaps. The subjective piece comes when determining which assignments are met and which are missed. Very often linemen are somewhere in between total domination of the defender and allowing the defender to pass quickly and blow up the play. Most plays combine some blocking success with some liability. I categorized a successful block on a running play as one in which the O Lineman in question A) gets to his target on time, B) sustains the block for enough time to allow the back to get through the hole, and C) does not allow the defender to push him into the projected path of the back, therefore forcing the runner to adjust. For a successful block on a passing play the lineman must A) meet the rush of the charging defender, whether it is the one lined up in front of him before the play, another stunting lineman, or a blitzing linebacker/d back, B) sustains the block long enough to allow for appropriate time for a QB decision, and C) not allow the defender to push him into the play to force the QB to adjust.

The LSU game was without a doubt Steen’s best game of the three. His 3 missed assignments on 52 plays equates to a grade of 94%. An excellent grade when considering his blocking assignments included the likes of Josh Downs, Anthony Johnson (you’ll hear his name a ton this coming season), Sam Montgomery, and Kevin Minter. Those 3 misses were pretty close calls, too, as 2 were group C’s above, where Steen allowed the defender to push and adjust the play. The other 1 was a WR slip screen, where Steen feigned a block inside, let his defender go, raced wide to block a linebacker, but didn’t get there in time, letting the backer get a tackle attempt (he missed and Christian Jones switched field, gaining 15-20 yards and a first down). Steen also allowed no sacks, and accumulated no penalties.

The Texas A&M game was a little tougher for Steen, as the Aggie defense was constantly stunting, blitzing, and often taking chances putting 9-10 guys in run support (in which they correctly predicted run almost every time). Still, Anthony had a very solid game, grading out at 85%. He spent a lot of the game going against either star DE Damontre Moore or Spencer Nealy, who was giving Barrett Jones fits as well. He, again, did not allow a sack or commit a penalty. The following is a play break down of Bama’s first touchdown against A&M, in which T.J. Yeldon followed a pulling Steen to pay dirt. 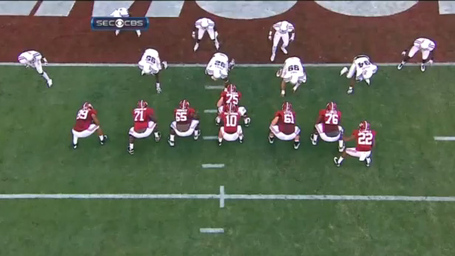 Here you see the set up to the play. Steen is of course in his Right Guard position, number 61. His job is to pause, pull left and clear out a lane with Warmack and Kouandjio to allow Yeldon access to the end zone. 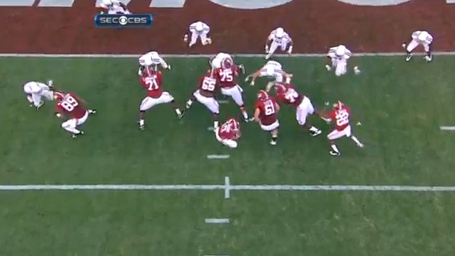 Here you see the beginning of the pull. Also note that Fluker (RT no. 76) is cut blocking the D Lineman (Nealy) that was lined up on Steen. Warmack helps Barrett Jones for a split second before moving on the the MLB Stephen Jenkins. 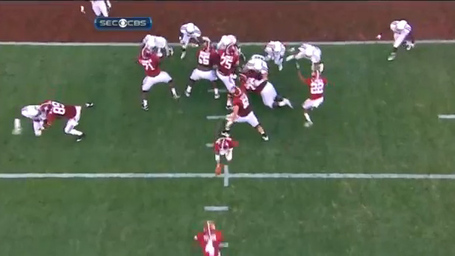 Here Cyrus (71) has his man tied up, Warmack is about to pounce on the charging MLB (Jenkins, 45, number not visible), and Steen is about there to provide clean up duty. Also note that Fluker's cut has essentially taken Nealy out of the play. 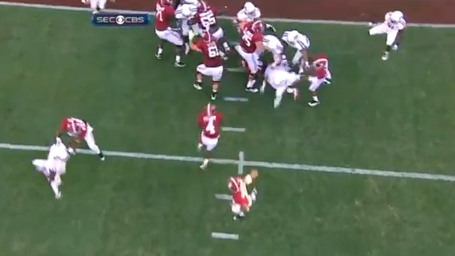 In this frame, the unthinkable has happened. Aggie MLB Jenkins has shifted to his right, splitting Warmack and Kouandjio, and would look to be able to make a play on Yeldon, if it weren't for Steen being in perfect position to bowl the clog of linemen over. 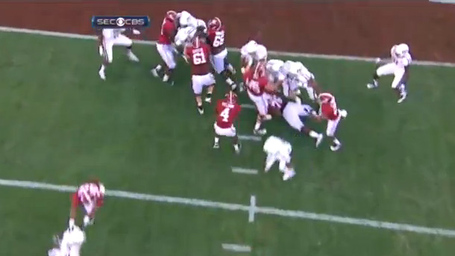 Here you see the result of a perfect blocking assignment from Steen. He, Warmack, and Kouandjio have bottled up both Jenkins and DL Julien Obioha, while also providing a road block to prevent A&M LB no. 11 Jonathan Stewart from getting to Yeldon. The one loose end is DL no. 92 Jonathan Mathis, who with the help of his teammates, has pushed back Barrett Jones enough to allow himself an opportunity on Yeldon. 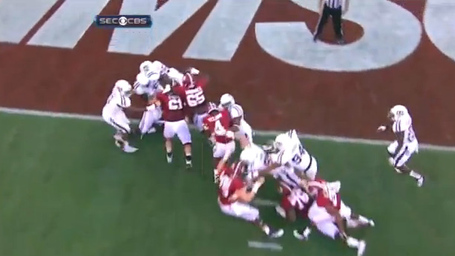 As has often been the case with recent Bama RBs, one man is not enough to get the stop. Yeldon plows through Mathis and scores while Steen, Warmack, Kouandjio, Jenkins, Obioha, and Stewart are all in a pile on the left.

Against Georgia, Steen went up against monstrous DT Johnathan Jenkins for most of the game. Steen is not small at 303, but Jenkins has over 50 lbs on him. Still, Steen held up well, grading out at 84%. Again, most of the missed assignments occurred when the defender pushed Steen back to affect the play after Anthony had initiated the contact. In spite of these misses, Steen’s highlight tape from this game is lengthy, as it also is for the other Bama O Linemen, who flattened Georgia’s defense in the second half and ran over them. While the positive plays were many, we will look at a negative play here to get a sense of what Steen needs to be aware of to improve this coming season. 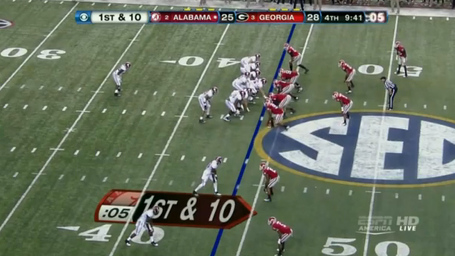 Here is a play in the 4th quarter with Alabama looking to put a scoring drive together to take the lead. Steen is barely visible behind Fluker from this angle, but that giant mass of red directly across from him is Johnathan Jenkins, no. 6. 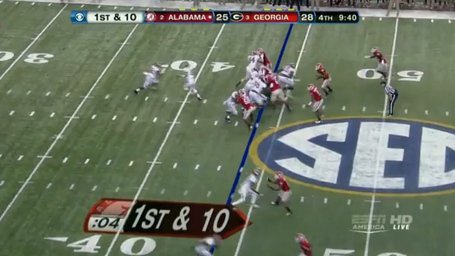 Here at the beginning of the play, we see the intention to run Lacy behind Warmack left. Steen and Fluker double up on Jenkins, and immediately get a good push on him, before Fluker sets his sights on no. 9, LB Alec Ogletree. This leaves Steen alone with Jenkins. 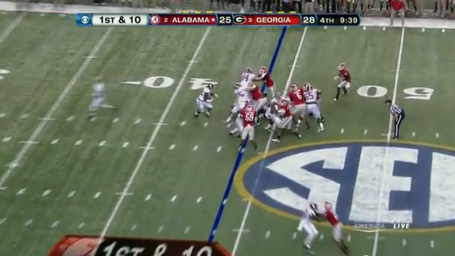 This is a good example of Steen getting a good initial hit on a guy, only to lose control and let the defender rebound to make a play. In this image you can clearly see no. 6, big Jenkins, shedding Steen to his right and looking for Lacy. 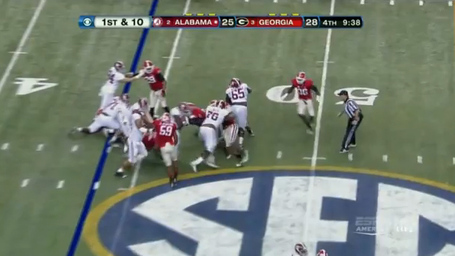 Now Steen is not visible, but he is on the ground behind Fluker (76). Here you see UGAs Jenkins (6) able to get a clean, direct hit on Lacy after 2 yards. 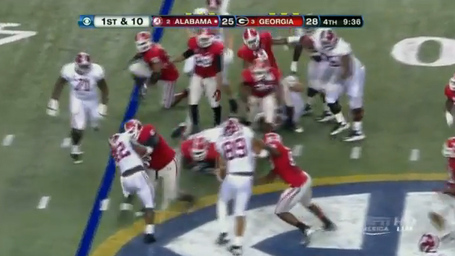 ...and with Jenkins's size, he easily trucks Lacy backwards after forward momentum only got him 2. This eventually leads to a Bama punt, and the offense holding their breath hoping for another late chance to score.

There is a ton to like about Steen’s game in 2012. The technique and knowledge is there, which is very good news, and if he can improve his push and sustainability of blocks, Anthony has an opportunity to be the next in a very distinguished group of star Alabama O-Linemen. Of course a lot depends on who lines up on either side of him. If he is forced to take on more assignments than scripted, he could get overwhelmed. He will need to not only take on his responsibilities, but usher the new starters at center and right tackle along as well. By virtue of experience, he and Kouandjio will be the unquestioned leaders of the line this year, and the front five will succeed or fail based on how those 2 respond. We will have to wait and see what results they can bring. From what you have seen, is Steen up to the task?