Bama’s Gym Tide Rises to No. 3 by Defeating No. 1 Ranked Oklahoma at Home

There are 4 SEC teams in the top 6 nationally, including No. 1 Florida & No. 3 Alabama. The Tide is the only team to beat No. 2 Oklahoma.

Share All sharing options for: Bama’s Gym Tide Rises to No. 3 by Defeating No. 1 Ranked Oklahoma at Home

The No. 4 ranked Alabama gymnastics team closed out its regular-season with a 197.525-196.900 win over No. 1 ranked Oklahoma in front of 11,776 fans in Coleman Coliseum on Senior Night. It was the Crimson Tide's fifth consecutive 197-plus score.

Oklahoma came to the Capstone undefeated but our girls weren't going to let that stop them from putting on a great performance on every apparatus. Alabama got things off to a strong start, tying its season-best score on the vault, going 49.525 behind 9.95s from sophomore Kayla Williams and freshman Lauren Beers. It was a career-best score for Beers. 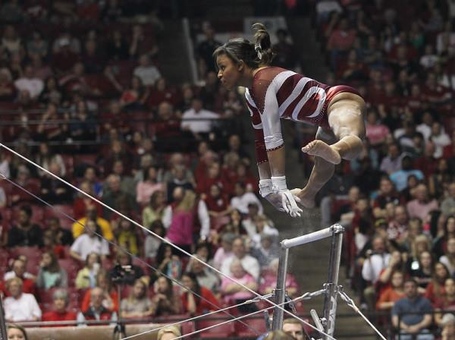 "Sledge's bar routine was phenomenal," Patterson said. "She set the tone for the night. I think good judges reward you whether you are first or sixth in the lineup and I think they recognized what an awesome bar routine that was."(1)

It was Senior Night so before and after the meet Alabama honored seniors Becca Alexin, Marissa Gutierrez, Ashley Priess and Sledge in their last regular-season home meet. Alexin, Gutierrez and Sledge have never lost a home meet during their four years, while Priess, a fifth-year senior, has lost just once in the Coliseum. 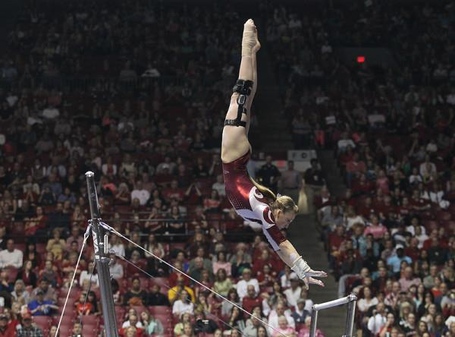 Becca Alexin tied her season best of 9.85 on the uneven bars against Oklahoma on Friday

Tonight was huge for us, especially going into the SECs," Sledge said. "Oklahoma came in undefeated. Every team that they have competed against has lost. For us to beat this No. 1 team - we are over the moon right now." (2)

After Friday night's win, Alabama has posted 34 consecutive home wins, a streak that includes a 24-0-0 regular season mark and a 10-0-0 record as host of the 2009 and 2011 NCAA regional championships. The Tide's last home loss came mid-way through the 2009 season. These stats alone are worth celebrating and when our football team rakes in these kinds of numbers we start talking dynasty, as mentioned in Erik's WOD article, Coaches Sarah and David Patterson deserve all the credit and honor that comes from a legacy such as the one they have built in Coleman Coliseum over the past thirty years. Dynasty and Legacy just do not seem to do this program justice.

With the win over No. 1 Oklahoma the gymnastics team moved up to No. 3. The Florida Gators regained the top spot in the nation, while the Sooners dropped one spot to No. 2 this week. With the Tide's bounce to No. 3, Michigan moved down to No. 4, while Georgia overtook LSU for the No. 5 spot.

We've talked about the somewhat confusing scoring of the Regional Qualifying Score (RQS) system before. The formula takes a team's three highest road scores and its next three highest scores (home or away), drops the highest score and averages the remaining five. I think they also sprinkle in some pixie dust and consult the Magic 8 Ball as well, but I'm never 100% sure. 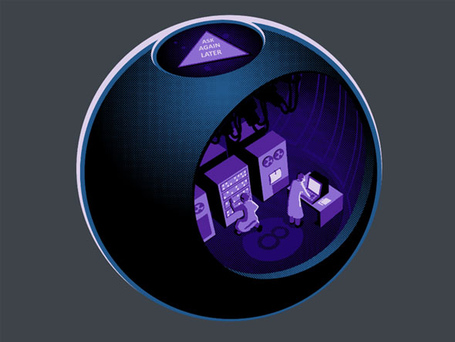 The Southeastern Conference Championships, slated for this Saturday in Little Rock, Ark., also uses RQS for seeding purposes. Florida, Alabama, Georgia and LSU are the top four seeds and will compete in the evening session starting at 6 p.m. CT at Verizon Arena while Auburn, Arkansas, Kentucky and Missouri will compete in the afternoon session.

The postseason is made of up 3 meets: the SEC Championships, the NCAA Regionals, and the NCAA Nationals. The SEC Championship is, essentially, a chance to earn a trophy and call yourself the SEC champion. No automatic berths are granted to the NCAA tournament, but you do get a chance to fill your trophy case and hang a banner, which isn't exactly chopped liver.

The path to the national championship actually starts at the NCAA Regionals. The Regionals consist of 6 teams each, and are held at 6 different sites around the country. Qualifying for the Regionals is based on your NCAA ranking. Over the next few weeks I'll be doing my best to try to explain how the Regionals are going for everyone, talk about how we're holding up against everyone else, and how we look going into the "Big Show" in LA at the Championships.