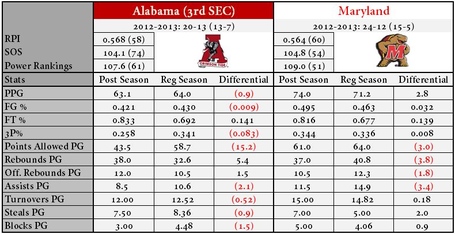 After what many consider its most complete game of the season, Alabama welcomes Maryland into Coleman Coliseum tonight for the Quarterfinal round of the NIT tournament. The winner travels to New York and Madison Square Garden to play in the NIT Final Four next Tuesday, April 2nd. The Tide dominated the Stanford Cardinals Saturday to the tune of a 66-54 win that, frankly, wasn't that close most of the game. We saw what Bama is capable of doing when we find consistency in our game. What made this game the most complete we've played this year? Here are the keys I believe contributed to our success:

Maryland, however, is a bit different. The Terps are typically seen in postseason play, going 5 of the last 10 years into the NCAA tournament. Historically they have 1 National Championship, 2 Final Fours, 4 Elite Eights, and 13 Sweet Sixteens. This season they have struggled a bit, but still hold wins over NCAA tournament teams NC State and Duke (whom they beat twice this season). They will certainly be a step up from Stanford, even at a #4 seed, and will present challenges to this Tide team.

Since opening postseason play in the ACC Tournament, Maryland has played some of its best basketball, winning four out of the last five behind the play of Dez Wells and Nick Faust. Wells is averaging 19.4 points per game on .586 (34-58) shooting, while Faust is averaging 12.8 points per game. As a team, Maryland is shooting .476 from the field, .386 from 3-point range and .797 from the free throw line.

Turgeon mentioned that, with Allen out, the front court could actually receive plenty minutes. Alabama only rotates one player taller than 6 feet 8, so the opportunity is there for Alex Len, James Padgett, Charles Mitchell and Shaq Cleare to make their mark.

What is the Tide's edge? It has an average turnover margin of plus-1.9. Maryland comes in at minus-4.2.

Maryland and Alabama are similar teams in many ways:

Both teams start a 7-footer, two guards and two players that swing between guard and forward.

Both teams can go smaller. The second-seeded Terps (24-12) resorted to five guards last week in a 62-52 second-round victory over Denver.

Both teams are young. Maryland has one senior - forward James Padgett, who comes off the bench - and starts a junior, three sophomores and a freshman. That lineup makes the Tide look experienced with two juniors and three sophomores.

Both teams play aggressive defense. Alabama's numbers are better - it has held opponents to 58.4 points per game compared to Maryland's 64-point average, and in the past five games, the gap is wider (52.8 vs. 67.4) - but a deliberate half-court offense keeps the Tide's defensive numbers down.

"They mirror us in a lot of ways in terms of the way they press, having guys that play multiple positions, playing with a lot of effort and I think they are one of the best defensive teams in their conference. From a versatility standpoint, they are a deep team with a lot of moveable parts."

On what his team has done better in the postseason:

"I haven't had the opportunity to sit back and reflect. We just played Saturday and we play again on Tuesday, so I'm in preparation mode trying to see what we need to do to get a win. But if you just look at the numbers, we've done the same thing we've done all season and that's defending well. I think the numbers say that. In the two NIT games, we've rebounded the ball well. Any time you do those two things in a game, rebound and defend, you are going to have a chance. Areas that the numbers say we have to get better is I'd like to see us take care of the ball better. Our assist-to-turnover ratio needs to get better."

On Maryland going to a five-guard lineup vs. Denver:

"They are capable of that. They have a very deep and versatile roster and those are things we've talked to our guys about. They have the ability to go with five guards like they did against Denver, or go traditional with two bigs. They have good size and physicality. They have played a lot of different ways during the course of the year, so that's something that we have to be prepared for."

On teams that Alabama has played this season that remind him of Maryland:

"They mirror us in a lot of ways in terms of the way they press, having guys that play multiple positions, playing with a lot of effort and I think they are one of the best defensive teams in their conference. From a versatility standpoint, they are a deep team with a lot of moveable parts."

"We watched a little bit of film (Sunday) and he is a really good player. He can get to the rim, can shoot the ball and is really fast. He is a good defender too. I am sure we will go over it more (Monday), but from what I've seen he is a very good player."

"We just need to do what coach asks us to do and play our style of play. The rest will take care of itself."

"Maryland is a good team. They can beat anyone on any given night and we just have to be ready."