Drop to No. 5 and Preparing for "Hostile" Territory

Preparing for a meet in Baton Rouge is a bit different than it is anywhere else on the road. According to Coach Patterson, " "It will be the most hostile [environment] that we've been in this year."

Share All sharing options for: Drop to No. 5 and Preparing for "Hostile" Territory

After beating UCLA on Friday, Alabama has now posted 33 consecutive home wins. Alabama last saw the Bruins in the regular season in 2008 in Los Angeles, when the Tide beat the Bruins 195.925-195.800. The Bruins also fell to the Tide the last time they made the trip to Tuscaloosa in 2007.

The girls wore their tornado relief gear (leotards & warm ups) and it always brings a tear to my eye to see them. They're starkly different than the rest of their unis with the black accented with the houndstooth remembrance ribbons and the 4-27-09 date across the back. Obviously some of these girls weren't on campus when the tornado struck Tuscaloosa but they are still fully aware of its impact as there are still areas around town that are not 100% yet.

Gearing up for the LSU meet this week has been pretty intense for the girls. Usually home fans at a meet don't cheer a gymnast when they stumble or fall from an apparatus or during a routine. Such events are mostly met with silence and then light applause when the girl returns to her routine to soldier on - no matter the team.

Being the visitor at an LSU gymnastics meet puts you in the hot seat. According to Patterson all usual gymnastic meet etiquette and decorum goes out the window. She says it's not something that the coaches or the school encourages, "it's just the nature of the LSU fans."

At one point during her career at Alabama, Patterson confronted a group of LSU fans near the balance beam because she "felt like it was not healthy." She asked them, "If this was your sister or this was your daughter, would you want someone putting them in a situation where it would jeopardize their health?"

None of LSU's opponents have scored 197 points or higher at the Maravich Center in Baton Rouge this season. No. 1 Florida, which scored 198.425 points in last week's meet against Minnesota, had just 196.575 in a loss earlier this season at LSU.

Because Alabama went to LSU just last year, only freshmen Lauren Beers and Carley Sims will be newbies to the unique environment when No. 5 Alabama faces the No. 4 Tigers on Friday. 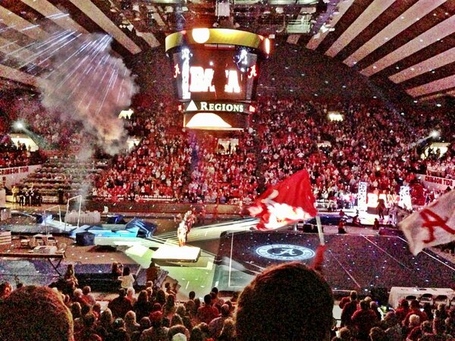 This is Alabama Gymnastics! via @CarsonTink

I can't imagine how nerve wracking that must be for the girls, they've been piping in crowd noise and music all week inside Coleman just to try to prepare. They've all been screaming and yelling at each other while they're working their routines. Of all the places I have been to watch our girls compete, the Maravich Center in Baton Rouge isn't one of them. I'm not sure my short temper related to the lack of respect that these athletes receive would be able to handle the atmosphere if I were to be completely honest.

This Friday night may prove to be our biggest meet this year so far, much bigger than even our major rivalry with UGA - especially with the challenge of no visiting opponent scoring 197 or higher. I know that our girls have it in them... I am sure they are ready.

Alabama travels to Baton Rouge this Friday to take on No. 4 LSU at 7 p.m. CT. The Tide beat the Tigers earlier this season 196.575-195.525 in Coleman Coliseum. You can tune in to 90.7 WUVA to listen to the meet live here on Friday. I may have an open thread for the meet.

Bama's season finale against Oklahoma is March 15 and tickets are still available. If you're around you should go check them out. I'm going to be there with my daughter because I promised her one more meet this year and I don't think we're going to be able to make it to Tuscaloosa for the Regional Championship meet. I hope to see some of you there!

P.S. Before last week's meet against UCLA our own 12 time All-American, 2x All-Around NCAA National Champion, and Alabama team captain for the 2011 and 2012 NCAA Gymnastics National Champions - Geralen Stack-Eaton sang the "National Anthem" for the home crowd at Coleman Coliseum in Tuscaloosa.