Rounding into form is a series that focuses on one player who is destined to have a huge impact on the Crimson Tide Football team in 2013. This week we cover Junior Inside Linebacker Trey Depriest.

Share All sharing options for: Rounding into Form: High Depriest

When Trey Depriest arrived on campus in 2011, he already carried the weight of monster expectations. Spurning the hometown Ohio State Buckeyes in favor of the Crimson Tide, Depriest had as much to prove to his detractors back home as he did the legions of Bama fans who expected great things from the 5 star recruit. He was ranked as the no. 29 player in the country coming out of high school by the 247sports composite ranking. He was the 3rd ranked ILB nationally and the top player in Ohio, traditionally a hotbed of college football recruiting.

As a sophomore in high school in Springfield, Ohio, Depriest played OLB, RB, a little bit of wildcat QB, and handled the kick offs, punts, and field goals. But when he moved to ILB his junior season, he garnered defensive player of the year honors, and became the target that was on every college coach's radar.

Depriest quickly made a name for himself on special teams as a freshman at the University of Alabama, racking up 14 tackles on kick coverage, as well as spelling Dont'a Hightower at Mike LB. He ended up with 25 tackles total in 13 games played, and despite not getting a huge amount of playing time, the expectations for Trey were even higher entering his true sophomore year.

Depriest famously was quoted during his recruitment that his goals were to "play as a freshman, start as a sophomore, and win the Butkis Award (for the nation's top LB) as a junior before leaving early for the NFL". While it was easy to get excited as a fan watching Trey check off the first two, even the most fanatical Alabama fan would have reservations concerning the next step. Coming in to the spring of '13, it seems like a daunting task for Depreist to be the top linebacker on his team, much less in all of college football. While that's less a knock on Depriest than an endorsement for C.J. Mosley, who will probably be at the top of many pre-season Butkis lists, there was little indication that Trey will be at an elite level from his sophomore game tape.

While he made several key plays in games, was 2nd on the team in number of tackles, and was a consistent presence in the middle of the field, he had relatively few tackles for loss (4) and no sacks, which are the stats that really seem to open people's eyes. Also when watching tape of his sophomore season, there seem to be as many negative plays as there are positive, which is troubling. We will take a look at a positive and a negative here to try and get a read on what 2013 holds for the incumbent starter.

Very early in the Michigan game, the first game of the season, we got a glimpse of Depriest making a great play to put the Wolverines in a third and "behind the chains" situation on their first drive. 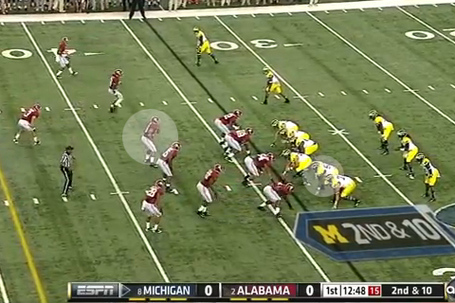 You can see the set up to the play here. Michigan is in a shotgun look with two backs, 240 lb Stephen Hopkins to the right of QB Denard Robinson, and fleet footed Vincent Smith to the left. Highlighted in a halo here is Depriest, in a linebacker set with Nico Johnson next to him and Xzavier Dickson to the weak side. Also note that Adrian Hubbard is in front of Depriest, on the line in his typical two point stance. Highlighted on Michigan's line is Senior Guard Ricky Barnum, who's job it is on this play to pull right and take on the strong side backer, in this case Depriest. 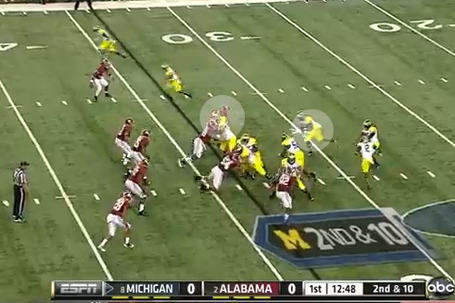 On frame two, you can see Depriest hesitates to diagnose the play, while 52 Barnum (not highlighted) makes his pull right. Highlighted here are Michigan RB Hopkins, who played more of a fullback role for the Wolverines, and Adrian Hubbard, his blocking assignment this play. Also note that the play looks to be an outside zone read, where Denard has the option to hand the ball to Smith on an end around wide right, or keep the ball and go left himself. Bama's DE Damian Square, 92, holds ground on the outside (bottom of the screen), leading Robinson to think that the best option will be to give to Smith (2). It looks like at this point in time that Michigan has the right side of the field blocked well, and Smith is certain to gain some yards, at the very least leaving a 3rd and manageable. 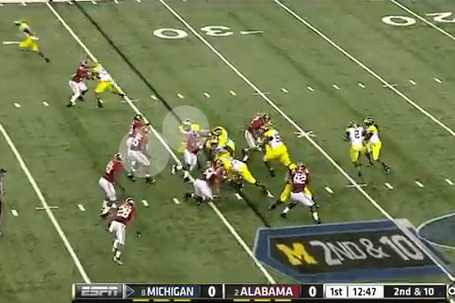 On the next screen, you can see the play developing further. UM 52 Barnum is still executing his pull, just now starting to get a glimpse of his target Depriest. Trey begins to spring to action, realizing that the play is designed to go wide right. Highlighted here is the Michigan TE (81) Mike Kwiatkowski, who helps his RT with Ed Stinson (49) with a chip block and the turns upfield to focus on ILB Nico Johnson, who he takes out of the play. 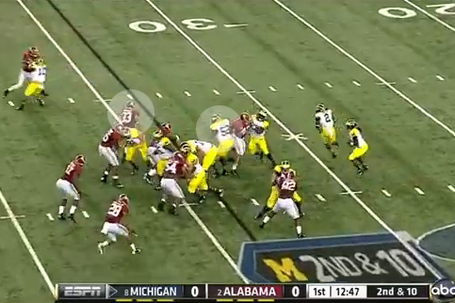 Now we are back to highlighting OG Barnum and Depriest. It looks as if everyone on Michigan's offense has gotten to their blocks well. It is up to Barnum to reach Depriest on his pull to spring Vincent Smith. 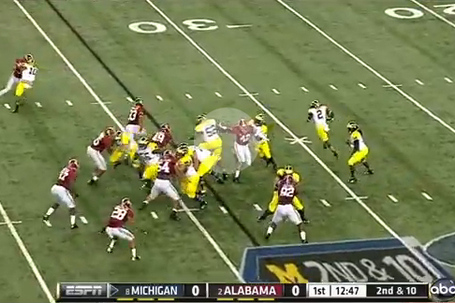 This is just a few milli-seconds after the last screenshot, but it is one of the most important shots of the play. Highlighted here you see Adrian Hubbard, blocked out of the play by Stephen Hopkins, realizing that UM's Guard no. 52 (Barnum) is pulling to take on a another LB. Hubbard's training intuitively leads him to arm check Barnum, throwing him off just enough to get Depriest out ahead of him. Hubbard is the unsung hero of this play. 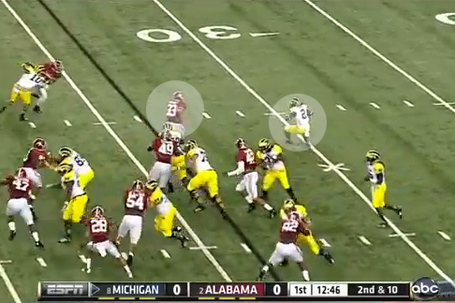 The next frame is also very important. Smith clearly has the speed to beat Depriest, or anyone else on Bama's front seven, to the outside. Depriest plays the run correctly, overanticipating the outside run, and taking an angle that forces Smith to turn back to the middle. Now either Depriest makes the tackle, or Smith beats him to the inside where there are plenty of large Crimson players waiting to devour the slight RB. 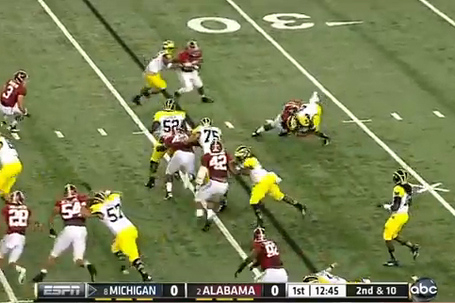 On the last frame you can see that Depriest indeed makes that play, giving the Wolverines 3rd and 11 or 12, which they would not convert, ending their first drive of the game, and leading to Bama's first TD. This is a play that very early in the season made Bama fans anticipate a breakthrough year from Depriest.

What began as a breakthrough ended as a break down, as we will see quickly here on a play that left many Bama fans with a sour taste in their mouths for the rising Junior. Early in the third quarter of the SEC Championship game, Bama was still hanging on to a 3 piont halftime lead, but would soon be on the bottom end of a two score deficit. The play in question is the 2nd down TD run by Todd Gurley. 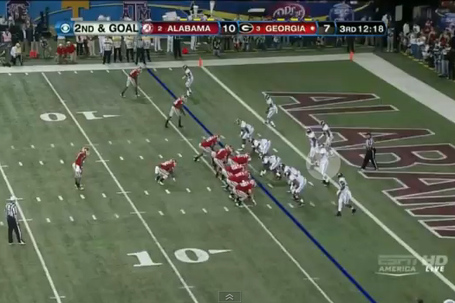 Here is the set up. Standard I-formation from UGA here, although Gurley is playing extremely deep at about 8 1/2 yards off the line of scrimmage. Depriest is highlighted here. 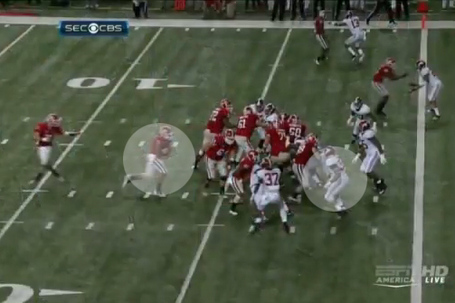 On this shot, you can see that Bama anticipated the run, and is in great shape, having two more defenders (9) than Georgia has blockers (7). Depriest is one of the two Bama players to go completely unblocked here. Nick Perry (27), late to get to the play, is the other. 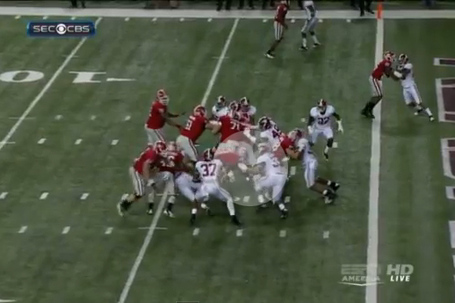 Here you see a good job by Depriest of finding the hole and filling it. If we didn't know the end result of the play, you would applaud Trey, because Gurley basically came directly to him. You do get a subtle hint here of what is about to happen. When Depriest changed direction slightly, to get from his position in the previous shot to this one, instead of directly attacking the hole, he stands upright for a split second before moving down on Gurley. This gives the Georgia Freshman time to get his head down, lower than Depriest. And with the momentum that Gurley is carrying from the 12 yard line, this spells disaster for Trey. 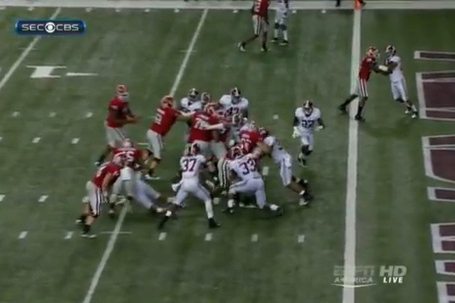 Here you see initial contact, Gurley leans to the left to keep his momentum towards the end zone, while putting his right shoulder pad right on Depriest's numbers. You can see that the force of the impact has already knocked Depriest upright. 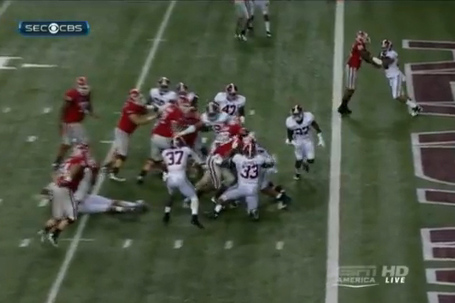 Now Depriest is just a speed bump for Gurley. Trey tries to frantically hold on to him, but his only chance of stopping Gurley before he reaches pay dirt is for help from his teammates to arrive. 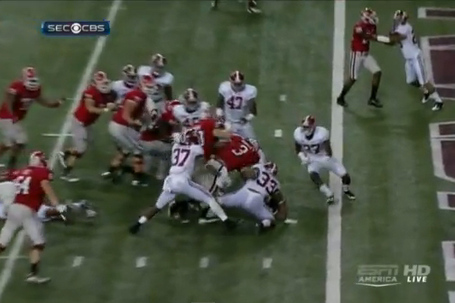 While he does get help, from no less than 5 other teammates, Gurley keeps his legs moving and eventually pushes in for the score. 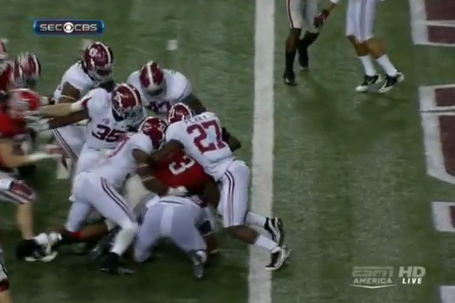 While some forgiveness can be levied to Depriest for allowing one of the SEC's top backs to bowl him over, if Trey truly wants to be elite, he will need to be able to make these plays. The bright side here is that the culprit for the result of this play seems to be the slight hesitation that gave Gurley the advantage. Hopefully with another spring under his belt, Depriest will be less hesitant and attack the plays more aggressively like we saw Mosley doing in his 3rd year last season.

While Alabama certainly has the depth behind Depriest, with the likes of Ragland and Reuben Foster, it looks like Bama's defense will sink or swim with Mosley and Depriest in the middle in '13. We should be looking for a more aggressive player in Depriest this year, resulting in more negative plays (tfls and sacks) for the opposing offenses. If Trey can achieve this, as well as keep up his consistent tackling numbers, then he has a shot to be Bama's next standout at LB. If he remains hesitant at the point of attack, we should expect more of the same: a solid, if not average Junior campaign.