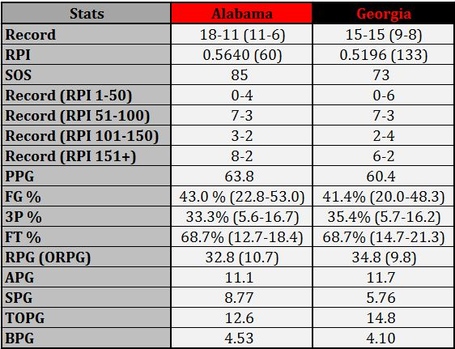 For the stat guys

Well, the first half anyway. We did fight back and a lot can be said for the effort, but our offensive inconsistencies continue to plague us as we were down by 19 in the second before coming back for an 87-83 final.

Alabama didn't make things interesting until the final minutes, when the Tide made six out of seven 3-pointers, capped by Lacey's with 8 seconds left to pull the Tide within 86-83. It was a stunning long-range shooting spree from a team that was hitting just 32.2 percent of its 3-pointers coming into the game.

"Uncharacteristically for us we had 14 turnovers in the first half, which was really our demise. They're a very offensively talented team. They had a lot of guys that were explosive and they really hurt us. We dug a hole for ourselves and it really carried over into the second half.

"They did a good job continuing to attack in the second half. They had multiple guys step up for them, (Marshall) Henderson is a terrific player, but I thought they got great play out of their bench. LaDarius White did great. Derrick Millinghaus gave them great minutes, and Jarvis Summers came in and gave them good minutes."

Retin Obasohan gave us really good minutes," Grant said. "I've got to find a way with the energy that he brings to get him more time on the court. He's doing a terrific job for us and certainly deserves that."

Obasohan's energy in the second half seemed to refuel the rest of his teammates and they made it hard for Ole Miss to pull away and seal the victory. The Tide trailed the Rebels almost the entirety of the contest. But it showed its resiliency and determination to finish the game and keep it close.

Grant said he was proud of his team for not quitting.

"I thought our guys just continued to battle," Grant said. "They continued to play the game. It would have been very easy to go the other way with that, the way it was, but I thought the effort was good."

Releford comes into the Georgia game as the team's top scorer (15.5 ppg) and three-point shooter (.426). An SEC player of the year candidate, he currently ranks fourth in steals average (2.1 spg), fifth in field goal percentage (.490), free throw percentage (.822) and minutes per game (33.1) and sixth in the SEC in scoring average (15.5 ppg). The Kansas City, Mo., native is the only player in the league to rank among the top six in each of these categories.

Sophomore guard Trevor Lacey is second on the team in scoring with 12.1 points per game. Coming into Saturday's contest, Lacey tops the team in threes made (55) and attempted (143) and assists (3.2 apg), ranks second in three-point shooting (.385) and steals (1.5 spg) and is third in rebounding (4.0 rpg).

"The game against Georgia is a huge game for us. It's our last home game. We get an opportunity to close out our SEC season at home undefeated with a very talented Georgia team coming in. They're playing great basketball right now. They had a huge win last night against Kentucky. In my opinion, they've got a guy that's probably a candidate for SEC Player of the Year in the league in Kentavious Caldwell-Pope. I think he's had an outstanding year and has really led their team. It will be a great challenge. We had a great game against them in Athens. The last time we played it came down to the wire, which most of the games in our league have, so we expect a very highly contested game. Both teams are going to be fighting a good battle. It should be a lot of fun to watch."

Senior Guard Andrew Steele to be honored before today's game:

Steele has had concussions seemingly end his playing career in 2011, only to bounce back. He has been through a coaching change that saw his brother leave the team early. Currently, the younger Steele is playing limited minutes because of a stress fracture in his ankle, the after-effect of an earlier injury.

Finally, the only thing that could keep him off the Coleman Coliseum court has arrived. He will be playing his final regular-season home game - and an important one - when Alabama takes on Georgia today. He and UA walk-on Keon Blackledge will be honored in festivities before the game.

Alabama goes into the game in a four-way tie with Kentucky, Ole Miss and Missouri for second place in the Southeastern Conference. Only three of those teams will get one of the top four seeds in the SEC tournament next week in Nashville.

OR 1) It defeats Georgia; 2) Ole Miss wins at LSU; 3) Missouri loses at Tennessee; and 4) Kentucky loses and Florida.

OR 1) It defeats Georgia; 2) Ole Miss loses at LSU; 3) Missouri wins at Tennessee; and 4) Kentucky loses to Florida.

Festivities include a halftime ceremony, presented by Alabama Power and Legacy Credit Union, which is scheduled to include recognition for more than 100 former Tide players, coaches and staff. It won't be hard to spot someone who played a special part in the rich history of basketball at the Capstone.

The group of honorees include players and coaches from several different eras, including legendary former head coach C.M. Newton. Others expected to be in attendance include teammates Leon Marlaire and Jack Kubiszyn, who were part of the fabled `Rocket 8' teams in the 1950s, and Mike Nordholz, a three-time All-SEC selection, who played for the Tide from 1966 to 1968. The list also includes legendary All-America big men Wendell Hudson and Leon Douglas, standout forward Eddie Phillips and NBA veterans like McKey, Ennis Whatley, Buck Johnson and Jim Farmer. And that's just the start of what will be a special day at Coleman Coliseum.

Here is your feel good moment of the day from 2002 - enjoy and Roll Tide!