Alabama Gymnastics Team's Road to a Three-peat National Championship is Paved With 9.9s

"Last week was a difficult for us as an athletics family with the loss of Coach Moore," Patterson said. "Going into Saturday's regional meet our goal was to perform our best and to make him proud."

Share All sharing options for: Alabama Gymnastics Team's Road to a Three-peat National Championship is Paved With 9.9s

The two-time defending national champion Alabama gymnastics team won its NCAA-best 28th NCAA Regional title to advance to the NCAA Championships for the 31st year in a row in front of a boisterous crowd of 7,758 in Coleman Coliseum Saturday night. 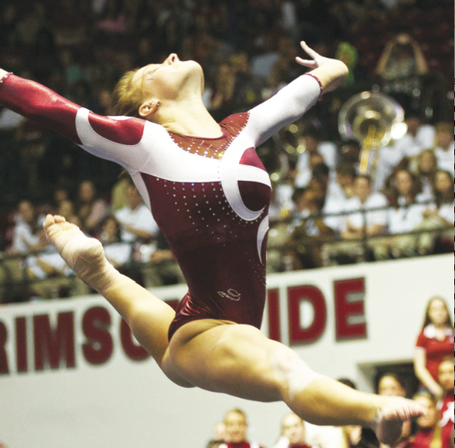 Alabama started things off with a 49.350 on the vault paced by sophomore Kayla Williams' winning 9.925 from the leadoff spot and Priess' 9.9. After its first bye of the evening, the Tide moved to the uneven bars where it used a trio of 9.9s from junior Kim Jacob, sophomore Kaitlyn Clark and Priess, who all tied for first place, to score a 49.375.
Jacob tied her career-best on the balance beam, scoring a 9.95 to lead Alabama to a 49.200. During the beam rotation, the Tide rebounded from a fall in the second spot and a large wobble in the third position to close with a 9.85 from junior Sarah DeMeo, Jacob's 9.95 and a 9.9 from Priess.

The Tide closed out the night with a string of 9.9 or better routines on the floor exercise, scoring a 49.475, led by junior Diandra Milliner's winning 9.925 and 9.9s from freshman Lauren Beers, DeMeo and Priess.

The other teams slated to advance from the other regionals across the country are Florida, Oklahoma, Georgia, LSU, UCLA, Michigan, Minnesota, Stanford, Utah, Arkansas and Illinois.

I had promised a final spotlight piece on our final senior, Ashley Sledge. The department didn't release the info until after I had finished my piece last week and by the time they released it, it was just too late to go back and add it to last week's piece. Here I will make sure Ashley gets her due. 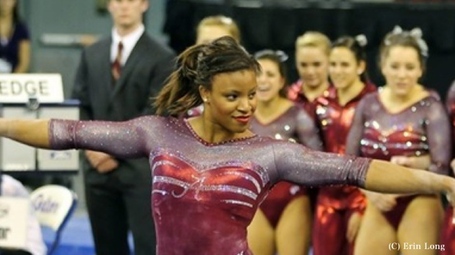 Everyone who has seen an Alabama gymnastics meet over the past three-plus years waits for this moment. Whether she is first in the lineup or toward the end, when Ashley Sledge steps up for her uneven bars routine, all eyes focus on her. More specifically everyone in the crowd is sitting on the edge of their seat, waiting for the end of her routine when she cranks around the high bar once, then twice and then lets go, soaring into the air, flipping twice in the laid out position before knifing in for the landing.

The official name for her release move is a double layout, but when Sledge does it, it seems a lot more like flying.

"The funny thing about that is that it took me like six years to learn that dismount," Sledge said. "I could not get it - I just could not do it. I didn't do that dismount until the year before I got to college and I had only competed it once because I tore my Achilles the first meet I competed it (on a different event). But I love that dismount. That's probably the skill that I'll miss the most when I finish gymnastics, just being able to crank my giants and fly."

"I'll miss the sense of team - I couldn't be an individual gymnast anymore," Sledge said. "Individual accomplishment isn't important to me anymore; I'm not in this for me. It's not what drives me. Just knowing that 16 other people are counting on me to do my job, that's what gets me thinking, `Okay, let's do this, let's get this.'"

Sledge grew up around Alabama gymnastics, living in Birmingham until she was 10 years old and going to the Alabama Gymnastics Camp each summer. So the opportunity to be a member of the Crimson Tide legacy of champions is something she looked forward to since she was young. It's one of the reasons that what she and her teammates have been able to accomplish means so much to the two-time All-American.

"It hasn't hit me because I haven't walked (in the graduation ceremony) yet," Sledge said. "I'm still taking classes, so nothing's really changed. But I have my undergrad degree so that's pretty awesome and my parents and my family are really proud."

Her Crimson Tide journey has made a tremendous difference for Sledge, helping her undergo that metamorphosis between child and adult.

Now the team is heading to the campus of UCLA for the NCAA National Championships. Coach Patterson is excited because we have the third seed and will be in the evening meet which has a stronger crowd presence and electric atmosphere. Even though there won't be as many fans cheering for Alabama there is a significant difference between the afternoon and the evening meets in the Nationals.

The afternoon session features No. 1 Florida, No. 4 Georgia, No. 5 LSU, No. 8 Minnesota, No. 9 Stanford and No. 12 Illinois. Overall, Alabama has faced seven of the 11 teams at these championships.

The Tide will start its semifinal session on a bye before opening competition on the uneven bars, followed by the balance beam. Following another bye, Alabama will finish off the night on the floor exercise and vault.

Each of the 12 teams competing on Friday will have an all-arounder from a team that didn't advance rotating with them. Washington's Lauren Rogers will rotate with the Tide.

Alabama won its NCAA-best 28th regional title to advance to Los Angeles. The Tide is one of just two teams in collegiate gymnastics history that has advanced to the NCAA Championships final site 31 or more years in a row.

"I can tell you without a doubt that even after advancing to the national championships 31 years in a row, that feeling of excitement and pride never grows old," Patterson said.

The top-three teams from each semifinal session will advance to the NCAA Super Six Team Finals which will get underway Saturday, April 20 at 4 p.m. PT in Pauley Pavilion.