Bama Gymnasts in LA, getting ready for the NCAA Championships and a shot at #7

Still hampered by ankle injury, Alabama senior Marissa Gutierrez won't compete at NCAA Championships... but the remaining members of the team are fully healthy heading into the three-day, 12-team meet in Los Angeles.

Share All sharing options for: Bama Gymnasts in LA, getting ready for the NCAA Championships and a shot at #7

Competition begins Friday, when Alabama will shoot to be one of three teams to advance out of its six-team semifinal and into Saturday's Super Six. Individual championships are slated for Sunday. 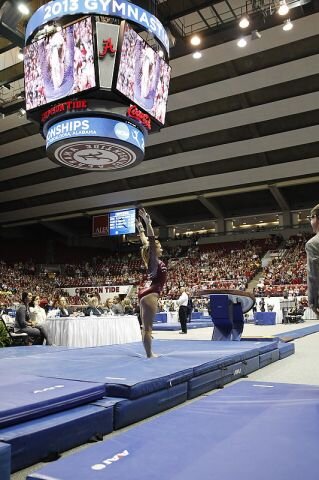 Bama is ready. The Crimson Tide is gunning for its third consecutive national title and seventh in program history.

This time last year Sr. Ashley Priess probably was thinking that her NCAA performance wasn't going to be the last one in a Bama uniform, but she hadn't made the announcement yet. She didn't hold anything back last year when she sealed the deal for Bama's second consecutive natty on the balance beam with a 9.95. With Gutierrez out this year due to her ankle injury, she won't have any less pressure. But, Priess is no stranger to ankle recovery (she's two years off her own surgeries on both her ankles) and pressure to hit her best apparatus performance. She scored a 9.9 on all four events in the Crimson Tide's lopsided victory in the NCAA regionals, a performance that inspired coach Sarah Patterson to call Priess the "epitome" of Alabama gymnastics because of her ability to peak at the right time.

Priess began the season performing in just two events, the uneven bars and balance beam. A few meets into the year, she added floor exercise to her repertoire. It wasn't until the NCAA Regionals, when Gutierrez was unable to perform and senior Ashley Sledge was working her way back from a back injury, when Alabama called on Priess to perform on the vault.

Leading up to prepping for the championships this week, Coach Saban visited the team and shared with them some insight. I would have called them the defending National Champions but Coach Saban would Process© me because he's already disputed the "defending" part by telling the women this: "You're not defending those titles," Saban told the gymnasts. "This is a different team, it's a new year. No one can take what you've accomplished in the past away from you." (1) 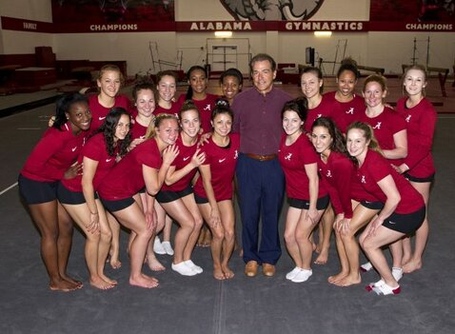 Are even the gymnasts taller than him? @BamaGymnastics 2013

I have a great deal of respect for what you've done, how much you've accomplished and the way you've gone about it," Saban told the gymnasts. He went on to tell the team that in addition to all the hard work they'd already put in, they needed to be in the right frame of mind to be able to execute at the highest level when the time came. (2)

The team has spent the week practicing, they traveled Tuesday & are now spending the day practicing in Pauley Pavilion at UCLA. Tomorrow they will be in semi-final session number two starting at 6 p.m. PDT. That's 8 p.m. CDT for all of you in Alabama and of course 9 p.m. EDT for me (aka Georgia time). I'll be doing another short write up about the performance of the team tomorrow and hopefully we'll be following them into the Super Six competition on Saturday and the individuals on Sunday.

I can't believe it's already the end of the season, I appreciate all the support that everyone here has given me and I hope that you all will continue to support our girls as we close out this season with a three-peat!!

P.S. An awesome story in the Crimson White about the Coaches Patterson, made me cry... and laugh... but mostly cry. :)

Gymnasts have come and gone since the summer of 1978, but the one constant in UA’s program has been the Patterson family. Originally, Sarah was hired out of Slippery Rock University in Pennsylvania as an assistant coach while she was still in school, but things changed around the time she was set to graduate. Coach Paul "Bear" Bryant offered her the head coaching job and a salary of $5,000.

She was told she could have one assistant, and she immediately thought of David. The two formed a friendship while working in Huntsville, Ala., for a summer, and she knew David was still in school at Alabama.

All Sarah could offer David was a $500 scholarship the athletic department had left over from the women’s basketball team. But in 1978, $500 was a lot of money for a student.

"Literally, I signed a scholarship that said women’s basketball scholarship on it," David recalls. "That’s how I got the money."