THAT WIDE RECEIVER IS SO OPEN, YOU GUYS!

Armchair Quarterback- Some d-bag who is certain that he or she can make better decisions than the coaches or players while watching a competitive sport on television.

Continuing our series on allowing you, the armchair quarterback, to prove your football prowess, we here at Roll 'Bama Roll will give you the opportunity to call the play. That's right, you're in charge.

We'll provide the game, situation, down and distance - you tell us what comes next. The only rule is you can't go back and watch the game first. No choosing what you remember will happen. Tell us what should happen.

Next up a rather important drive in the 2012 version of the 3rd Saturday in October.

At this point in the game, with about 12:30 left in the 2nd quarter, the score is 7-3 in favor of the Tide. 'Bama jumped out to an early 7-0 lead but its last two drives have stalled, while Tennessee was able to muster a field goal midway through the 1st. Tennesse, even though trailing by 4 points, seems to have a bit of momentum.

A few plays earlier, in what looked like a miscue by both the Running Back and Quarterback, CJ Mosely picked off Tyler Bray around the Tennessee 35 yard line.

Side note: As the 'Bama defense was coming off the field, after just forcing the interception mind you, Coach Saban and Smart both show no emotion over the turnover but immediately begin to instruct Nick Perry on how he either was lined up incorrectly (pre-snap) or did not read the play correctly after the snap. This is why Saban is the best. 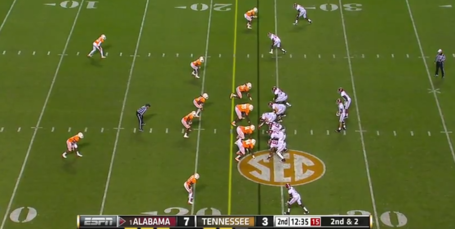 A few things to consider about the play above: No player motions for Alabama, TE Michael Williams, who is lined up next to LT Cyrus Kouandjio and LG Warmack, C Jones and RG Steen all have their hands in the dirt seemingly showing run. However, RT DJ Fluker is in an upright position showing he is prepared to pass protect.

After gaining a first down on the Yeldon run, Alabama then comes out in a very similar formation as the two previous plays 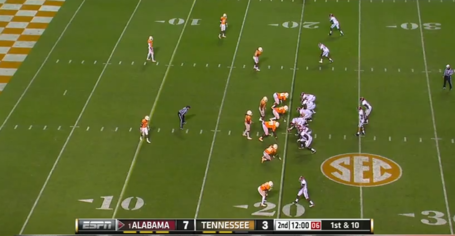 As you can see, the formation looks just like the previous one; Shotgun, one TE, three WR set. The only difference is that TE Michael Williams is now lined up next to RT DJ Fluker, who now also has his hand in the dirt, and LT Cyrus Kouandjio is prepared to pass protect. WR's Amari Cooper and Kenny Bell have flipped positions and Yeldon is once again lined up to the right of AJ McCarron. Besides the flip of WR's (also note that slot WR Christion Jones is now off the line of scrimmage) and Williams changing sides, the formation is virtually the same.

Tennessee, defends the play in its base 4-3 set, same as the last two plays. However, reacting to the change in Alabama's strong side, the CB to the bottom of the screen plays tight to Amari Cooper and the CB to the top switches and plays off Bell by about 8-10 yards. 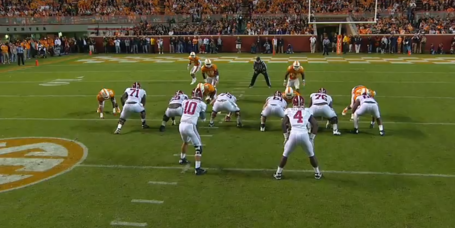 Both Linebackers have moved close to the line of scrimmage. This is either showing a blitz or they are up in run support. The Defensive Ends have also changed position. The DE who was previously lined up directly in front of Kouandjio has now moved to his outside shoulder, and the DE who was previously to Fluker's outside, has now moved inside. (I cannot tell from the pictures whether or not the DE's simply moved up or down the line of scrimmage or actually changed positions)

Given the information you have at hand, and with no foreknowledge of what will happen, what play would YOU call? Do you go for the jugular or play it safe? (Place your "play call" and why you chose the play in the comments below)

The questions is however, were you right? Click here to find out. (If video doesn't start at the correct play, fast forward to the 40 minute mark.)