In both 2011 and 2012, four Alabama players were selected in the first round of the NFL Draft. In 2013, the Crimson Tide have a chance of matching or surpassing that number. Dee Milliner, Chance Warmack, and D.J. Fluker look to be locks but what about Jesse Williams and Eddie Lacy?

With a story and a look that may have come right out of Hollywood, Williams has been a fan favorite in Tuscaloosa the moment he stepped on campus. Originally from Brisbane, Australia, he grew up playing rugby and basketball in Australia before taking up football at the age of 15. He landed at tiny Arizona Western College before signing with Nick Saban in 2011. 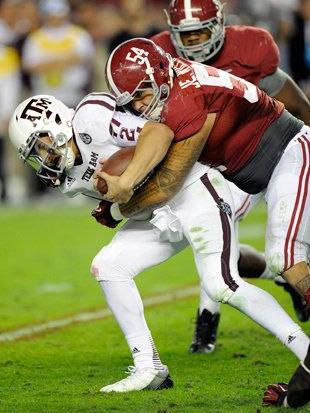 Besides great size and speed, what else is there to like about Jesse? How about his versatility? In his first year, Williams earned a starting job at defensive end while moving inside to tackle in passing downs in a four-man front. His senior year, he was asked to move to nose guard to anchor 3-4 defensive scheme which turned in the nation's top rush defense (79.8 ypg). He also played fullback on goal line plays. 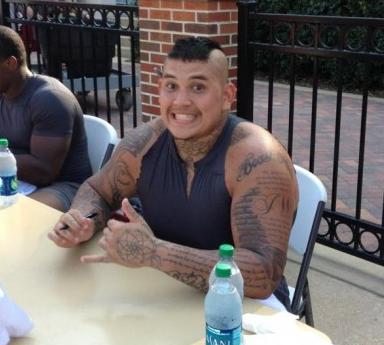 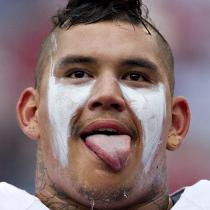 If you like characters, he's a good one: tattoos that climb his neck, mohawk, face paint, and that cool Aussie accent. If that is not enough for you, he is a smart, fun guy and great teammate. But Jesse has a strong family bond and has not let success and stardom go to his head.

Williams is getting looks by #25 Minnesota Vikings, #26 Green Bay Packers, #28 Denver Broncos, and #31 San Francisco 49ers. Some Chicago Bears fans hope he will slip into their clutches. Baltimore Ravens fans have their eyes on him too.

Eddie Lacy (5-11, 231) The Crimson Tide has long been known for churning out defensive players to the NFL. Under the reign of Nick Saban that has not changed but now Alabama has also become the place for NFL teams to fill their running back shopping needs. Saban runs a Pro-Style offense that helped Mark Ingram and Trent Richardson become first round picks. The baton was handed to Lacy and he ran. And ran and ran. 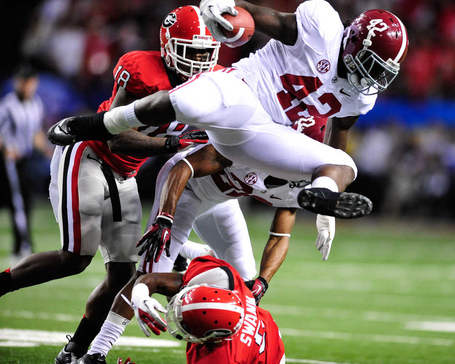 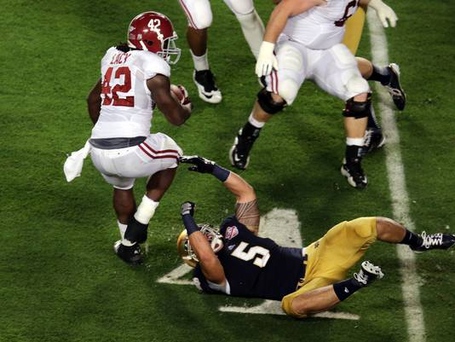 If there is one thing Lacy will be remembered for at Alabama it is his spin move which is more instinctive than for show. He seems to have a knack for when to do it. I honestly cannot recall a time in his three seasons of running the ball for the Tide when it backfired.

If you wonder how he might do against NFL-like competition, consider he rushed 20 times for 181 yards and two touchdowns against Georgia's Jarvis Jones, Alec Ogletree, John Jenkins, Kwame Geathers, Baccarri Rambo, and the rest of the vaunted Bulldogs defense in the SEC Championship game. Notre Dame's Manti Te'o, Stephon Tuitt, Louis Nix, and company gave up 140 yards on 20 carries despite having one of the nation's top defenses. The Irish finished the season #7 in total defense. 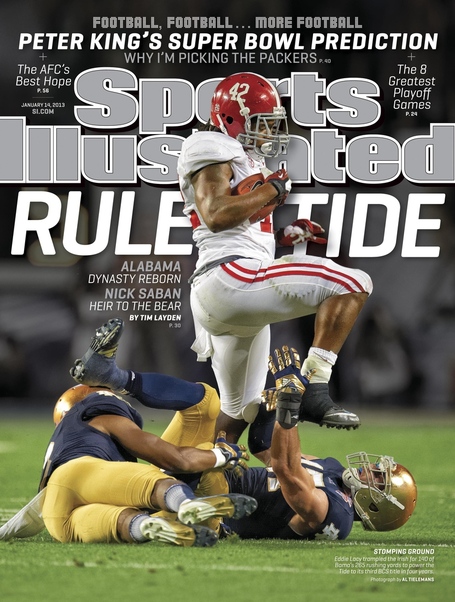 The St. Louis Rams are looking to replace the departed Stephen Jackson and may be interested at #22. The Green Bay Packers have been getting by on a committee of running backs (Cedric Benson, Alex Green, James Starks, Brandon Jackson, Ryan Grant) but have yet to find a consistent every down back. They have not had a single RB run for more than 703 yards since Grant ran for 1253 in 2009. They pick #26. The Cincinnati Bengals may be interested in Lacy to lighten the load of BenJarvus Green-Ellis.