Your daily dose of Crimson Tide and sports related links and quotes. 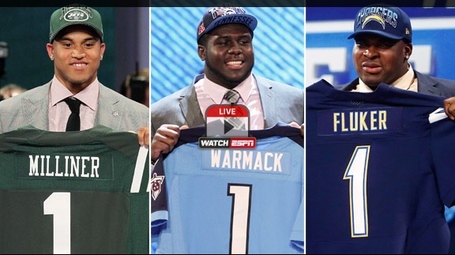 As if there is not enough pressure playing for the circus that is the New York Jets, the Big Apple press are always and forever going to compare Milliner to Darrelle Revis who was traded earlier in the week to Tampa Bay for the Bucs' 2013 first round pick (13th overall) and a 2014 fourth round conditional pick, which can become a third round pick. Revis is a 4-time Pro Bowl cornerback (2008, 2009, 2010, 2011).

The Jets wasted no time finding a new cornerback just days after trading their best player to Tampa Bay. With the ninth overall pick, the Jets selected Dee Milliner, a CB out of Alabama.

The New York Times, New York Post, and New York Daily News have all labeled Milliner as the "replacement".

"In the NFL, you don’t see the kind of power he has, and the way he moves the line of scrimmage," (Head Coach Mike) Munchak said. "To me, he is the complete package. He loves the game, and he has a passion for it. … He played against some great players in college and played well in the big games and he knows how to win.

Fluker's selection at number 11 made three straight Alabama players selected in the first round of the 2013 NFL Draft.

For San Diego, help on the offensive line was a dire need.

(Quarterback Phillip) Rivers was sacked 49 times in 2012, second most of any NFL quarterback. His blind side was a carousel of undrafted rookie Michael Harris, oft-injured Jared Gaither and a still-developing Kevin Haslam. The Chargers averaged 3.6 yards per rush, tied for second worst in the league.

* If you are counting at home, this makes 13 first round picks from Alabama in the last 4 drafts.

Snatched out of Auburn's backyard, 4-star Stephen Roberts makes his verbal commitment to play for the Crimson Tide. He is the third defensive back in the 2014 class.

"I chose Alabama because they kind of fit my style of play and the way I play," Roberts said. "They’re a great defensive team, and that’s what I play, defense. They have a great atmosphere, fan base, everything is just great. Most of the corners get picked and succeed."