Alabama heads into regionals at No. 3 nationally and as the No. 1 seed in the April 6 NCAA Tuscaloosa Regional Championships. Ashley Sledge (back injury SEC practices); Marissa Gutierrez (ankle Arkansas) will be back in rotation with limited apparatus for Gutierrez.

Share All sharing options for: Alabama Gymnastics Healthy for Regionals: Damn the Torpedoes, Full Speed Ahead!

Alabama is ranked No. 1 in the nation on the floor exercise, No. 2 on the vault, No. 3 on the beam; No. 7 on the uneven bars. Alabama will host Utah, Denver, Kent State, BYU and Iowa State in NCAA Regional tomorrow at Coleman Coliseum.

"This is the most important meet of the year and certainly the most pressure packed for all the teams," UA head coach Sarah Patterson said. "For us, to have a chance to defend our title, we have to do a great job at this meet."(1)

The top-18 teams in the nation by regional qualifying score are seeded into the six regional sites. The remaining three teams are slotted into regionals by proximity and national ranking. The top two teams from each regional move on to the NCAA Championships, which will be held April 19-21 in Los Angeles.

This will mark the 13th time Alabama has hosted a regional, with the last time coming in 2011 when the Tide won the regional and led the nation in regional attendance. Alabama has won an NCAA-best 27 regional titles and advanced to the NCAA Championships 30 years in a row.

In addition to vying for its 28th regional title and 31st consecutive trip to the NCAA Championships, the meet will serve as the final home appearance for the Crimson Tide's four seniors, Becca Alexin, Marissa Gutierrez, Ashley Priess and Ashley Sledge. 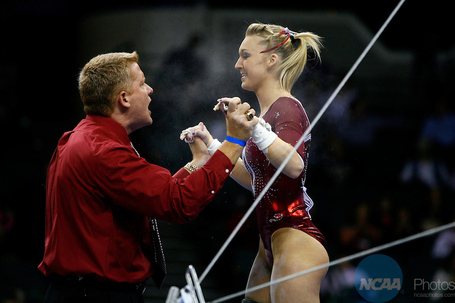 For senior Becca Alexin, the last four years have been the culmination of a dream that began nearly 15 years ago when she first attended the Alabama Gymnastics Camp.

That means that Becca was attending camp there a year after I graduated Bama. It's no wonder that she decided at 7 years old that she was going to be a part of a Dynasty (yeah, I think we can use that term for this team, too).

Now, that seven-year old dreamer is a three-year Scholastic All-American who is enjoying her best season as a senior. A three-year mainstay of the Tide's uneven bars lineup, she has been rock-solid as the Tide's second gymnast up week-in and week-out.

"It's been everything I could have imagined and so much more," Alexin said. "It's been a lot of hard work and a lot of commitment. But for everything that I've worked for and for the opportunities that have been afforded to me to pay off like they have - I could never thank Sarah and David enough for this chance, for this career."(2) 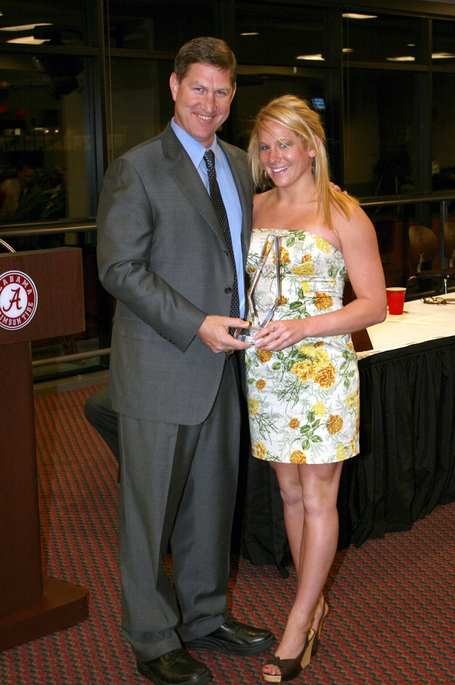 In Ashley Priess' very first meet as a freshman on the Alabama gymnastics team, she came up last for the Crimson Tide having to hit her balance beam routine on the road, in the Southeastern Conference, to secure Alabama's win. It was no ordinary SEC meet either, it was Alabama-Auburn and if Priess didn't hit her routine, the Tide's decades long win streak against the Tigers would come to a screeching halt.

Priess walked up to the beam, said a little prayer putting it all in God's hands, and proceeded to knock out a 9.9, the first of what would become a long line of clutch performances during her career, and securing the Tide's win.

Flash forward five years. Ashley Priess is in her very last regular-season road meet. She is up last for the Tide having to hit her balance beam routine in yet another SEC competition, to secure Alabama's win. It's no ordinary meet either, it's a "pink" meet, and the Tide is undefeated in breast cancer awareness meets. If Priess doesn't hit her routine, that streak is snapped.

Priess walked up to the beam, said a little prayer putting it all in God's hands, and proceeded to knock out a 9.95, the latest in a long string of clutch performances, securing the Tide's win.

After sitting out the 2011 season following preseason surgery on both ankles, she came roaring back in 2012, clinching Alabama's sixth NCAA Championship in what has become the most familiar of scenarios for Crimson Tide fans - Ashley Priess, up last, on the balance beam, with a chance to win it all. She closed out 2012 and her first senior season with a 9.95, edging the Florida Gators for the national championship.

She could have closed it out there, a fairytale ending to her career. Except ... she wasn't quite done with that career just yet. So she came back for a fifth year, only the second time that's happened in Alabama gymnastics' storied history.

"It was absolutely worth coming back," Priess said recently with a truly contented smile.

"More than anything, I'll just miss the relationships and the fun times with the people in my life," Priess said. "I'm probably never going to be in a situation for the rest of my life where I have so many like-minded, cool individuals around me. To have that common bond, that sisterhood - it will probably never be there again. So I'm definitely trying to embrace that." (3) 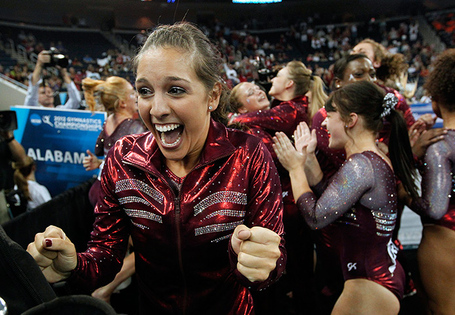 When Alabama All-American gymnast Marissa Gutierrez hits a great routine there's no need to wait for the judge or even a replay to know just how it went. It will be obvious seconds after she salutes the judges.

"I feel like when you hit a great routine, you did it for the `A' on your leotard, and I tell myself that a lot," Gutierrez said. "Because even though it's your performance that counts, you aren't doing it to get some individual title behind your name - it's for the team. So I think that it's exciting to get that. After you nail a vault, you can't just be like, `Oh, I'm just going to salute to the judge and trot back - no, I'm going to scream and run down the runway and jump into someone's arms and scream out loud because it's exciting. It doesn't happen all the time." (4)

Gutierrez is bringing that same enthusiasm and excitement to her internship with at the Stallings RISE Center this semester, where she is working with the three-year old class five days a week.

Gutierrez, who earned a perfect 4.0 grade point average in the fall, is set to graduate with a degree in early childhood development in May. After finishing both her athletic and academic career at the Capstone, she plans to go into teaching and perhaps pursue a master's degree in special education. The end of her career will engender big changes for the three-year member of the SEC Academic Honor Roll.

"I don't know life without gymnastics so I think that's going to be a huge transition," she said. "I've been doing it since I was four and a half. It's never going to be completely out of my life just because I've been doing it forever, but it won't be my every day anymore. So I'll have to find something else that I'm good at, which is going to be different."(5)

All regionals are as follows:

The top two teams and the top two all-around competitors (who are not on an advancing team) from each regional will receive an automatic berth to the national championships in Los Angeles. Calif, April 19-21, hosted by UCLA. In addition, the event winners at each regional site will advance to the national championships (in that event only) if they are not part of a qualifying team or an all-around qualifier.

IF you are a current UA student with an active ACT! Card the Medalist Club has pre-purchased 2,000 tickets and are making them available for free to the first 2,000 students to arrive at Coleman Coliseum tomorrow night. Everyone else, tickets for adults are only $12 and kids are $8 and are still available HERE.

(Note to readers: We have one more senior and one more story.... But the UA athletic dept is saving that story for later today, I'll add it to the article once it has been released but I'm sure some of you have heard it. I also want to take this time to thank you all for the support this season and for bearing with me this week as I've been fighting what I can only call the zombie plague. While the gymnastics team is mostly healthy and competing this weekend, it seems I am not... Only *I* could manage to end up with some sort of stomach bug that causes me to end up at the hospital after not eating for three days, requiring three litres of fluids just to get my blood pressure up enough for them to think I am "safe" to be released... yet have managed to put on 5 lbs!! It can only be explained by me reanimating in my sleep and eating the people around me!!)