Boy, oh boy. Those Aggies aren't taking long to stir this pot. Kick Bama in the nuts last year? Check. Raise stadium capacity above Bama's in an obvious manhood-measuring maneuver? Check. If there's one thing Bama won't abide, it's having to admit we're second place in something. These boys are fitting in just fine (except for the male cheerleaders bit (Seriously. Enough. Fix it.)), but danged if they aren't making a push to be one of the primary teams I look forward to us playing annually. 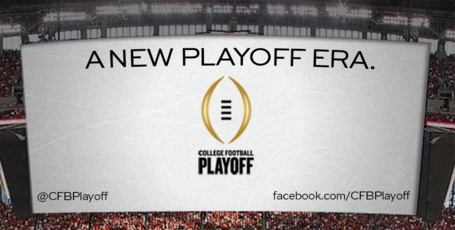 A boring logo to go along with a boring name. Hooray, progress.

Slive: If issues like cost of attendance don't occur "it may be appropriate to talk about some alterantive or division." Not his desire.

Like it or not., agree with it or not, this issue isn't going anywhere anytime soon. Just as we can now see in hindsight that the emergence of the College Football Playoff was inevitable, so too, is it clear that student athletes will be paid (Legally. HEY-O, Cam Newton. /fartnoise) at sometime in the near future. The discussion has clearly reached a critical mass and the only real questions now are when will it happen, which teams will be paying, and how much?