Let's go into the film room and take a look at Eddie Lacy's rare mix of vision and elusiveness and see why he should be considered as one of the all time Alabama greats.

Continuing our conversation this week about Alabama running backs, let's take a look at exactly what great vision looks like and how Eddie Lacy used this ability to extend plays. Hint: next week we will be focusing on Linebacker play.

We all know this play very well and have probably watched it a hundred times over the last 5 months. The play in question occurred on the 2nd Alabama offensive drive of the 2012 BCS National Title game. 'Bama is currently up 7-0 and it is obvious Notre Dame is simply outmatched and is struggling at the point of attack.

After mixing in some wide receiver screens, runs and short passes, Alabama faces a 3rd and 1 on the 24 yard line. Notre Dame must get a stop here and force Alabama to kick a field goal.

Much like it has done on the first 2 drives, Alabama comes out in a Double TE (with an H-Back), single HB set. Amari Cooper is split out wide at the top of the formation/screen. 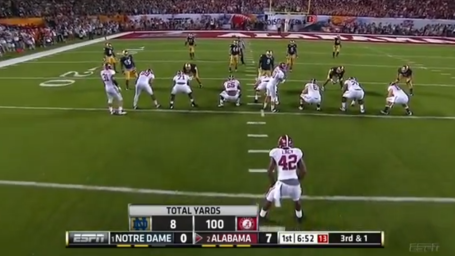 Notice the 10 Notre Dame defenders within view of the Line of Scrimmage (LOS) to only 8 Alabama blockers. Obviously, ND has numbers in their favor.

Pre snap, Alabama doesn't do anything fancy. No WR motion or TE's or H-backs changing positions. Also note ND Safety Zeke Motta Creeping up to the LOS. With only 5 blockers for Alabama on the left of the OL and 6 ND defenders to block, again ND has numbers in their favor and will likely have an unblocked defender.

At the snap, Motta shoots, unblocked, between TE Michael Williams and LT Cryus Kouandjio and is seemingly going to tackle Lacy in the backfield for a three yard loss.

This is where Lacy (and Ingram/Richardson/Coffee/Yeldon, etc.) shows his vision and why Alabama RB's are so tough to bring down behind the LOS. Look at these shots one after another and watch Lacy jump, cut, jump again, see the hole, bounce to the outside, then see the hole to the inside and bust up the middle to gain an additional 5 yards. It is simply one of the best runs I have seen in a while. 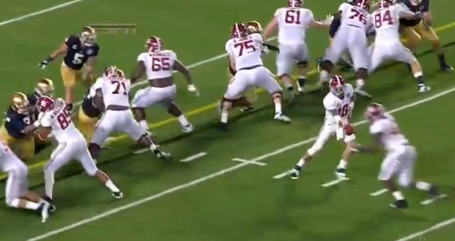 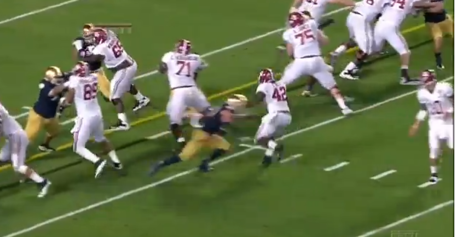 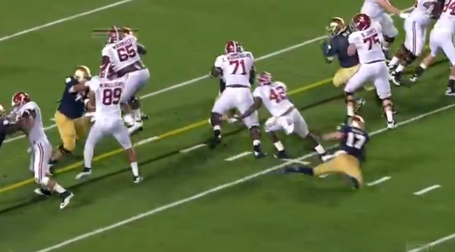 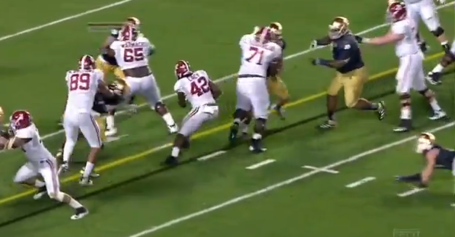 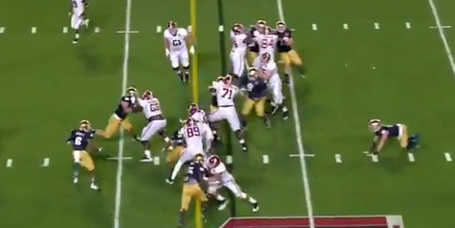 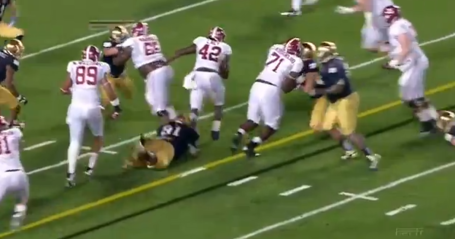 Seeing Anthony Steen to his right, Lacy jumps to the outside.

At this point Lacy has to decide - Continue to the outside or attack the middle? 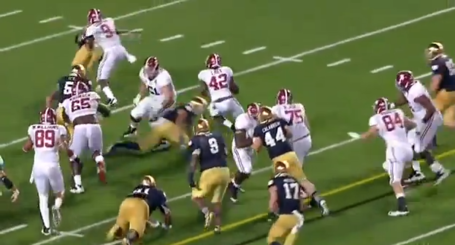 His vision sees the ND defender rolling away from Cooper taking away the outside run. 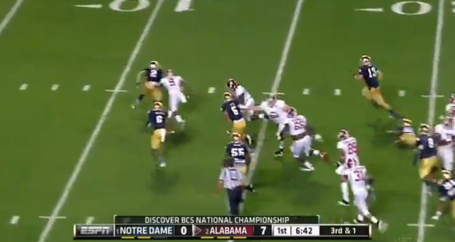 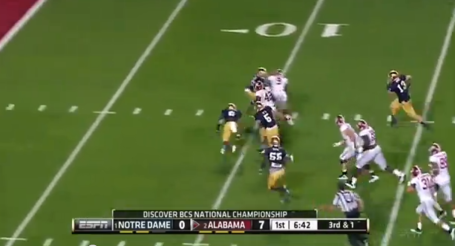 This wasn't a power move where Lacy rolled over defenders. He used his vision and agility to turn what should have been a 3 yard loss into a 20 yard gain.

A "decent" running back likely hits the hole up the middle and is stopped for a modest gain and actually is probably tackled in the backfield by the blitzing Motta. However, Lacy's vision allowed him to see the hole to the outside and by doing so extends the play.

Was there quality blocking on that play? Sure. Every Alabama blocker seemingly locks on to their man, stands him up and the very least holds their ground giving Lacy running lanes. (this is the essence of Zone blocking).

Motta coming in unblocked notwithstanding, the only player who somewhat missed his man was Michael Williams who allowed DT #91 Sheldon Day to get inside leverage and almost tackle Lacy for a short gain. Cyrus K does allow his man to cross his face but does a good job of using the defenders forward momentum to take himself out of the play.

This type of vision and elusiveness is an attribute we have seen over and over from Alabama running backs and is why I believe Lacy, if he stays healthy, should have a good, if not great, NFL career.