Alabama Football: Who's the Best Linebacker? Ro, Dont'a or C.J.?

Better? Best? I have no clue.

Share All sharing options for: Alabama Football: Who's the Best Linebacker? Ro, Dont'a or C.J.?

As promised yesterday, this week we'll be placing our focus on Alabama Linebackers, past and present. In the spirit of last week's debate on who, so far, has been the best Running Back of the Saban era, today we look at three different Linebackers: Rolando McClain, Dont'a Hightower and C.J. Mosley.

I chose these three for certain reasons:

2. All three were considered leaders on a National Title winning team

3. All three were or look to be highly drafted players. (CJ is projected to also be a 1st rounder)

Real quick, if you are looking for a more in-depth understanding of the Linebacker position I'll point you to Smart Football. That is the best site, in my opinion, for anyone looking to increase their football IQ beyond what we can provide here. In the coming days we will do some of that type of play analysis and breakdown but it won't be to the detail that Smart Football can provide.

Before we can compare one player to the next, we must define the role of a Linebacker (LB), particularly the inside linebacker position. The primary function of an ILB (Weak or Middle) is in run support. Given Saban's defensive philosophy of stopping the run, from the inside out, if a LB isn't strong at the point of attack, simply put, they won't be playing LB for Alabama. The secondary function of an ILB, and this is especially true for the Will, is in pass coverage.

So, are they strong in run support and in pass coverage?

While evaluating a LB further, some other general questions come to mind: Do they instinctively find the ball (aka do they have a nose for the ball)? How's their footwork? Can they cover in space? Are they a three down LB? Do they have decent speed? Do they tackle well?

Just like when we compared RB's, it is easy to say "they all have the attributes of a great LB". Though this is true, sometimes hard lines must be drawn to decide who the best is. (These are subjective points that could be argued)

Speed and Athleticism: I had to leave off an X for Dont'a due to his issues in 2010. He just seemed to lose a step from his freshman/Sophomore campaign where, before the injury, he looked much faster. Also, he just never looked as fluid. By that I mean a quick first step and solid in coverage.

Tackling: I didn't give this to McClain which will probably cause a stir. When I watch tape of McClain I see a bull tackler but not a player who used proper form tackling. Could he tackle a player? Well, yeah. But far too many times he went high, threw his shoulder and didn't wrap up. This isn't about missing or making tackles but about using proper tackling technique.

Versatility- Mosley and Dont'a played both Will and Mike LB, while McClain primarily played Mike. Dont'a also was effectively put at DE on 3rd and long situations due to his ability to rush the QB.

As you will see, there are far less stats for Linebacker than for Running Backs. (duh) It really does come down to Total Tackles, Tackles For Loss (TFL), Sacks, Interceptions, Passes Defended, Forced Fumbles and Fumbles Recovered. 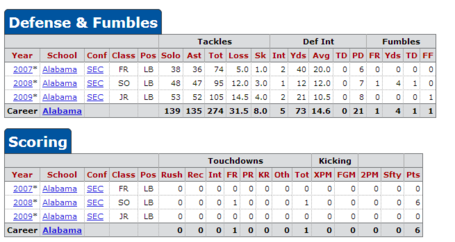 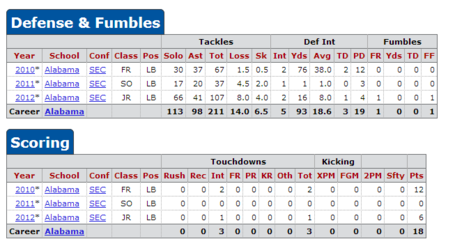 Lastly, a players game film (not just highlights) is in my opinion the best way to evaluate a LB. Stats don't show you a players instincts or his foot work. It also can't tell you how fundamentally sound a player is. Sure, they'll tell you whether or not a player was productive but it is only one piece of the puzzle. So again, what better way to waste hours of your day than watching film of your favorite Alabama players?

Again, just like last week, I'm going to let you guys decide, by the form of a poll and in the comments, who the best of the three is. C.J. is in a disadvantage here because he hasn't completed his final year at Alabama, but given the stats he has already accumulated, he has a very good chance to over take the top spot a year from now.