Share All sharing options for: The Jumbo Package │05.16.13

And so ends (at least temporarily) McClain’s thoroughly disappointing NFL career. The 23-year-old linebacker out of Alabama was the No. 8 pick, by Oakland, in the 2010 draft. but registered just a half-sack in his rookie season. Two more subpar years in black and silver (and off-field issues) led the Raiders to release him.

I find it interesting that out of Andre Smith, Glenn Coffee and Rolando McClain (None were recruited by Saban but all three were the first highly drafted Alabama players under Saban) all three are considered busts by the respective teams that drafted them. Sure, Andre is still playing but he has yet to live up to the 1st round pick. However, out of the players Saban recruited and were eventually drafted, at least in the first 2-3 rounds, all seem to be thriving. Coincidence? I think not.

Big series for the Tide to end the season. We could use the bump, if we win a few, in the RPI to further solidify a NCAA post season birth. Regardless, I consider this season a success given the struggles of 2012.

Go support our ladies if you can. And if you aren't able to, send out some Roll Tides in their direction.

Nearly half of Division I athletics departments have higher spending rates on salaries than scholarships | al.com

Between 2005 and 2012, 47 percent of the Division I public universities listed in a recent USA Today Sports revenue database increased coaches and staff pay at a higher rate than their athletic scholarship costs, according to an analysis by AL.com.

Would Saban sacrifice some of his salary or that of his staff to pay players? Something inside me says, "No, 'aight."

ESPN's Mark May calls Tim Davis 'a classless backstabbing coward' after Davis refers to Nick Saban as 'the devil himself' (video) | al.com

"I've always wanted to work with (Florida coach) Will (Muschamp)," Davis said. "Will's got a plan. Will coached under the devil himself for seven years. I only did three. He did seven. And his DNA is not any different than Nick." 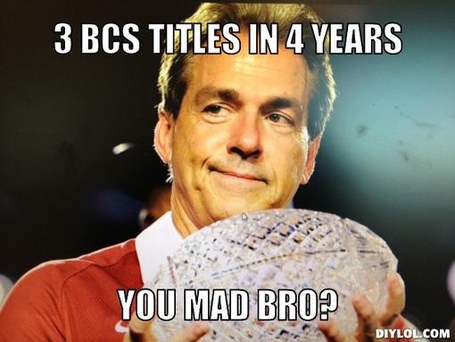