Armchair Quarterback- Some bro who is certain that he or she can make better decisions than the coaches or players while watching a competitive sport on television.

Continuing our series on allowing you, the armchair quarterback, to prove your football prowess, we here at Roll 'Bama Roll will give you the opportunity to call the play. That's right, you're in charge.

We'll provide the game, situation, down and distance - you tell us what comes next. The only rule is you can't go back and watch the game first. No choosing what you remember will happen. Tell us what should happen.

Next up, a pivotal drive for Alabama during the SEC Championship game.

As I'm sure many here have re-watched the SEC Championship Game at least five times by now there are still those among us that forget (probably cause the final score was 32-28) that at the end of the 1st Quarter the score was deadlocked at 0-0. If you were anything like me, your assumption quickly became that this would be a defensive slugfest. Oh, how we were wrong.

Funny moment just before this play was when Gary Danielson makes a comment about how the Alabama O-line had been a non-factor up until this point in the ball game. He wasn't necessarily wrong mind you, but my gawd how things changed rather quickly.

Back to the set up-

Alabama had opened the game in a hurry up offense (I still shake my head at this) and UGA's defense was playing exceptionally well to this point. A couple three and outs by both teams, a fumble by Alabama and one good drive by UGA, aided by a fake punt, left the score at 7-0 and the momentum in favor of the 'Dawgs. The Alabama offense looked hapless, while the Alabama defense looked stunned. Simple fact was 'Bama either scored on its next drive or risk the game possibly getting out of hand.

Luckily, on the previous UGA possession, the 'Bama defense stands firm on a 3rd and 13 and forces UGA to punt. The Alabama offense now takes over at the 18 yard line with 11:16 left in the half.

As you will see, Alabama quickly motions out of this look. Norwood motions out to right flat, Williams and Johnson flip sides and Lacy moves to the backfield. There are no Wide Receivers to the left of the formation

UGA responds like most defenses would; LB's switch from strong to weak side, CB's follow TE's and WR's until you see the final formation for both teams. 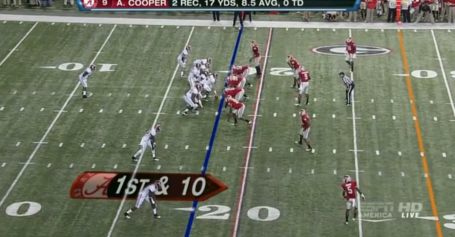 UGA is in its 3-4 look with DB's seemingly setting up to defend the pass. Not shown in this picture is a Safety lined in deep center.

Given the information you have at hand, and with no foreknowledge of what will happen, what play would YOU call? Do you go for the jugular or play it safe? (Place your "play call", why you chose the play in the comments below and please hide any reference to answer with the spoiler alert thingy)

The questions is, however, were you right? Click here to find out. (If video doesn't start at the correct play, fast forward to the 38 minute mark.)