Cause you have nothing better to do for Memorial Day weekend than watch film of Alabama beating LSU.

Share All sharing options for: Your Weekend Film Review: AJ to T.J.

In honor of LSU beating Alabama in baseball this past week, I thought it would be best to remind them who the king of the SEC really is. And what better way to go about that than by showing a play that probably makes LSU fans cry just a little inside. #trollingforfun

This play isn't one that probably jumps out in your mind as an example of great blocking. It's such an iconic run by TJ that we forget what needed to happen to make the play successful. Sure, Yeldon does a lot of the work once he gets into the open field but I want you to take notice of why he had such a clear path to the end zone. 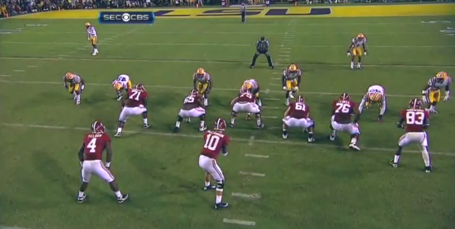 LSU had been sitting back on its heels a bit leading up to the last two plays. They weren't in prevent but they weren't exactly playing aggressive either. On the previous play, LSU only rushes 3 and brings a LB on a delayed "blitz". On this play however, LSU shows blitz (which they had shown previously) and has 7 men stretched across the LOS. 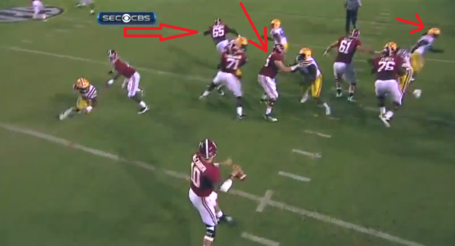 Instead of watching what Yeldon (or what the blitzing CB is doing or didn't do) keep your eyes on the offensive line. It's a screen play so the O-line doesn't have to block for an eternity. CyKo does a great job of sealing his man Mingo away from the play. Barrett also locks up his defender allowing Warmack and Steen to get to the 2nd level. I couldn't get a good screen shot of this but Barrett actually comes off his man and helps CyKo when Mingo takes a hard inside move. Pretty impressive vision by Barrett considering he was already locked up with his man. 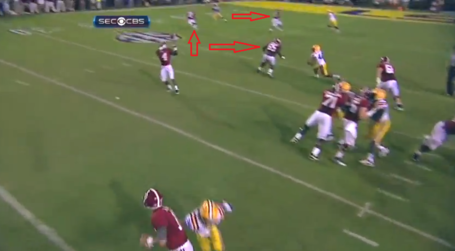 As we all know it was the perfect play call in this situation. LSU blitzes the outside CB, who doesn't even force Yeldon to adjust his trajectory in even the slightest way. (The reason for this has been debated ad nauseum by the LSU contingent, here)

What is impressive is that Yeldon sees the blitz, sells the screen perfectly and allows his man to go right past him. Very mature play by Yeldon.

Alabama now has numbers in their favor. Warmack is in the open field and has the extremely tough task for a man his size of blocking Minter in the open field. He doesn't exactly get a block on Minter but his huge frame forces Minter to take a bad angle on Yeldon.

Now it's up to the 'Bama WR's to get a block on the remaining LSU Safety and CB. 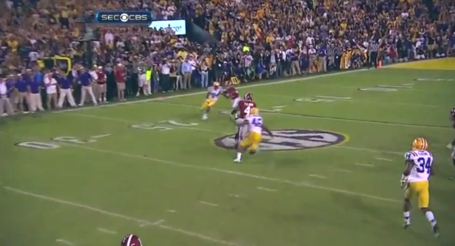 Christion Jones does a nice job on his man Tharold Simon but honestly the LSU player was probably (maybe) forcing Yeldon to the inside where he had back side help. It was still a great blocking play by Jones but he had a little help here. 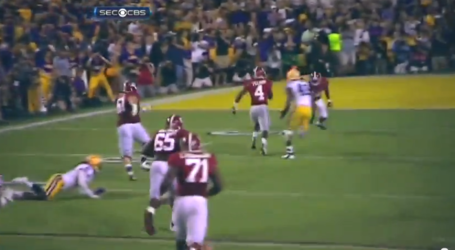 Marvin Shinn is the lone guy who pretty much does nothing on this play. (Well I guess Steen doesn't block anyone either.) Shinn however doesn't get a block on Loston (who you see laying on the ground behind Steen due to a nice move by Yeldon) and he doesn't do much to stop Mingo from pursing Yeldon. I guess he got in the way enough to do something but it wasn't all that much. Honestly, once Yeldon got past Simon, it was up to him to get in the end zone.

The rest is history.

Though the play call was perfect given the situation, the execution was nearly flawless and without the excellent blocking by both the WR's and Olineman, Yeldon never makes it into the end zone.

Roll Tide y'all and have a great weekend