Worst of the Best: Arkansas at Auburn 2012

We do it so you don't have to: Examining the worst games from the best conference.

Share All sharing options for: Worst of the Best: Arkansas at Auburn 2012

The offseason brings us many things: glowing retrospectives, hope for a renewed future, previews of upcoming campaigns, promises of youth and watching the progression of NSD recruits. It also brings us abject horror, dread, and some truly awful games when you look a bit closer. As part of our offseason march through the dog days, we will be breaking down the worst games of the 2012 season. Folly, foibles, failure, and painful reprises of games that were unwatchable, baffling and/or just plain awful shall be the order of the day. We begin with two SEC-West foes, Arkansas at Auburn

Auburn and Arkansas football in 2012 were, charitably described, flaming bags of dog vomit. There have not been two teams this inexcusably bad, with this much talent, in the SEC since Dubose's 2000 Alabama team. As of the time of this game, October 6 2012, Auburn was sporting a 1-3 record -and, had ULM handled its business, should have been winless. Needless to say, the Tigers did not have an SEC victory going into this one. 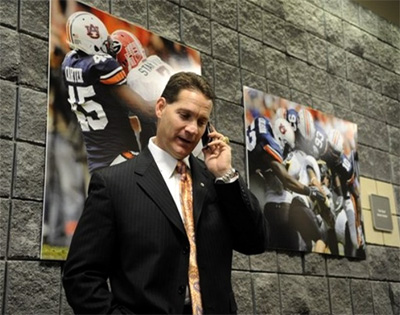 The fuq is that? A dorm room?

Arkansas, meanwhile, was a preseason Top-10 team, with all-everything QB Tyler Wilson, an underrated DL, a superb WR corps...but absent Head Coach/Easy Rider/Dong-Vendor/Serial Mendicant, Bobby Petrino. Not that any of that mattered when the keys to the shiny Hogmobile were given to interim head coach and reverse-Midas, John L. Smith. The Hogs came into this road tilt at 1-4, also winless in the SEC. Its SEC losses were not even competitive, having been shelled by Alabama (52-0) and Texas A&M (58-10).

Something had to give on the Plains. Unfortunately, what we were treated to was a microcosm of both teams' crapulent seasons.

This game was, by no stretch, the worst that either team would play. It was, however, indicative of everything that plagued both squads: terrible coaching, poor execution, lack of focus, unforced errors, unmotivated players going through the motions, and every weakness of either team on display like football's terrible glass menagerie. Taken as a whole, and particularly in front of dozens of apathetic Auburn fans, this was one of the dullest, most painful games to watch of the 2012 season. Unfortunately, someone had to win this low-energy slapfight, and the "winner" can only be called as much with a heavy sense of irony.