Who's the Best Running Back? Eddie Lacy, Mark Ingram, or Trent Richardson?

Roll 'Bama Roll attempts to end the debate over who is the better Alabama Running Back once and for all. This should be fun.

Share All sharing options for: Who's the Best Running Back? Eddie Lacy, Mark Ingram, or Trent Richardson?

Yesterday we were having a rather lively discussion on who was the best running back — Eddie Lacy, Mark Ingram or Trent Richardson.

Some key comments. If yours didn't make it, sue me.

By the way, although I’m voting for Trent today, I think he’s tremendously overrated by our fanbase. He is the best athlete of the Saban era, hands down, but not the best football player, or even the best running back. He lacks the instinct and awareness of Ingram, or the awareness and elusiveness of Lacy.

Absolutely agree with your comments RE: Trent. Freakish athlete. A clear #3/4 as far as RBs go.

Trent Richardson – Had to carry more of the load for a season than any of the other backs (Coffee, Ingram, Lacy, Yeldon)

OK, so that's a wide array of opinions and honestly deciding who is the best Running Back out a group this talented screams GUMP. I think we can all agree though they are all amazing RB's and any one of them should and could be considered #1.

But if we must have the conversation, and the off-season demands it, then let's have it with some parameters. After all anyone could just say "Lacy is better" or "Trent is the best" but that isn't really going to end this discussion, now is it? I understand that a lot of this is pure speculation and opinion and that there is no way to completely remove these feelings from the discussion. But again, if we are going to have this debate, let's try our best to remove who we personally like and look at each player solely as a RB.

So, my goal is to present you with facts, some assumed, and then let you decide, based on these facts, who you believe the best is.

Key point, we will only discuss Running Backs who were feature backs for an entire season during the Saban era. This would mean Yeldon would be left out of this discussion. Yes, he had a good portion of the yards and carries last year, but I wouldn't consider him the "featured" or starting RB.

I'm going to leave Coffee out of this discussion as well. This is in no way a reflection upon him as a player but more to the fact he just isn't on the level of Lacy, Ingram or Richardson.

Before we look at each player individually, we need to define what are the attributes of a Running Back.

In no particular order:

In my opinion, that is an all inclusive list of attributes that would not only describe a quality RB during the Saban era but also any RB, from any era, on any team.

Now, let's take a quick look at each RB's attributes:

The even number of attributes was not intended

Some of my assumptions could and will be debated but again I feel this is a pretty honest look at each Back's abilities. Obviously, each back had Vision but would you not agree that Ingram's and Lacy's vision was better than Richardon's? Ingram was a strong back but nothing like Lacy and certainly not Richardson. Ingram and Lacy were both riddled with injuries during their final year at Bama, while Richardson, outside of a stretch during his sophomore year, was relatively healthy for most of his career.

Honestly, I'm not a huge fan of comparing stats as away of deciding who the better player is/was. My main point of contention is that so many factors play into stats that it just isn't a fair comparison. That said, each of these players played with-in a three year period of each other, all three accumulated at least three years of stats, all three were starters in NC games, they played in similar offensive schemes and also similar offensive lines. Some could say that the 2012 OL was the best ever at Alabama, but it's not like the 2009 and 2011 versions were scrubs.

All stats gathered from www.sports-reference.com (click image to enlarge) 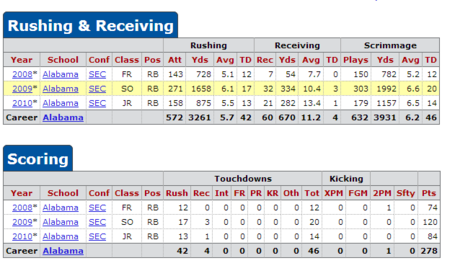 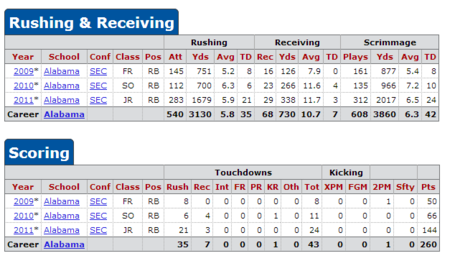 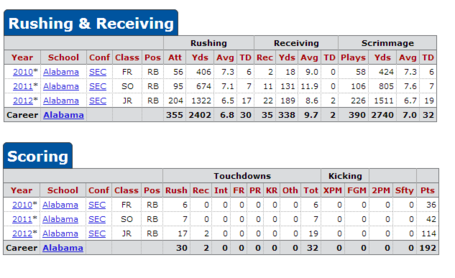 I don't believe it is a stretch to say all three RB's have very similar styles. They are all physical, tough runners, who amassed a ton of yards after contact. However, as mentioned above, each approached the game differently but had similar attributes. Ingram had a jump cut that was eye popping, Richardson may be the most physical runner college football had seen since Herschel Walker and Lacy had vision that perhaps only rivaled that of Ingram.

I would say (my opinion) that Ingram was more Elusive; Trent more physical; Lacy had the best vision; Ingram was the best receiver; Trent the best leader; Imgram had the best knowledge of the offense..

So to remove my opinion of each players styles I present you video evidence. What better way to waste most your day then watching videos of our favorite players running around terrorizing our rivals?

So, Who Is The Best?

If you saw my list of Greatest Players of the Saban Era you would see I had Trent ranked #1. Some here disagreed with this and said he is overrated. (Uh, OK.) That list though encompasses more than just his ranking as a Running Back. This discussion today is solely about each player as a Running Back only.

So, based on all the facts, assumed or not, who is the best Running Back?