Worst of the Best: LSU at Auburn

Taking another look at the fart-blowers of the 2012 football season.

Share All sharing options for: Worst of the Best: LSU at Auburn

The season was young, September 22, 2012. LSU was riding a lofty #2 ranking into Jordan-Hare stadium. Despite losing beastman LT Chris Faulk for the year, the Bengals were as talented and as physical a team as any in the country, and rightly tapped to be one of the few standing in the SEC and national races. It was also the second year of "new" Offensive Coordinator...quick! Guess his name!...Greg Studrawa, so hopefully the inconsistencies of 2011 would be minimized.

The Auburn WarPlainsEagleTigerMen meanwhile still had faith in this rebuilding season, buoyed by the addition of new assistants: Scott Loeffler (hereinafter "LOLfler") taking the reigns of a moribund offense, and Brian VanGorder, a pressure-first defensive guy brought in with deep ties to hated-rival Georgia and throughout the South. The Fambly also had distributed Chiz Rags thoughtfully throughout the Loveliest village!

We expected a tight ballgame, as is wont to happen in Jordan-Hare. We were all but assured a low-scoring, hard-hitting affair, as is the norm between the two Tigers...not to mention this was Mettenberger's first road start, and Auburn had the nation's 116th ranked +/-. What we got was nothing short of performance art. Offense, execution, mistakes, playcalling, coaching: 'twas a cornucopia of crapulence. 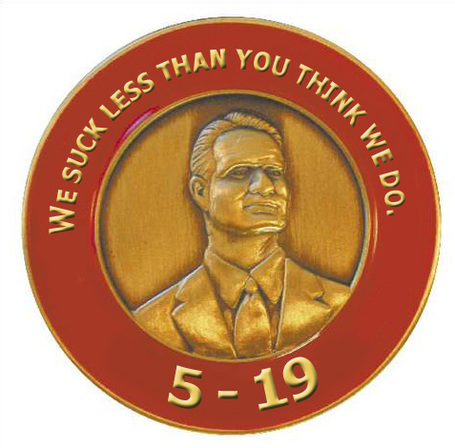 Chiz memorabilia: The worst vote of confidence in college athletics.

The game would play out to be one of the more baffling ones of the 2012 SEC season: LSU frankly dominated at the point of attack. The Red Stick Tigers outgained the West Georgia version by nearly 2:1, they held the ball 7 minutes longer, they moved down the field at will with a series of powerful runs, manageable passes by Mettenberger, and getting ahead of the sticks. This was despite Auburn's DL, led by Ford and Lemonier, actually deciding to play the run for a change. That Auburn lost was not a surprise, that the DL was competent against the pass and the run was a definite shock. As usual, it was an abominable effort by the worst LB corps in the SEC that doomed Auburn. Plays that should have been short-gainers turned into big ones when LSU's backs saw second-level open grass with nary a linebacker in sight. And asking Auburn's secondary to tackle is like using a steel wool condom: It's painful, impractical and those words should never be strung together in a cohesive sentence.

However, in a theme far-too familiar to LSU faithful (see also, Arkansas, Ole Miss, Q1 against TAMU etc) the Tigers' offensive scheme (and complacency) was perplexing to say the least. In Mettenberger's first road start, you'd expect to see tons of Ford and Ware. And both had great success between the tackles early. LSU drove the field mostly at will in the first quarter and a half. As expected, each back finished with over 5+ YPC. Nevertheless, Studrawa and Miles (okay, probably Miles), chose to put the ball in the air 27 times. The result was the most predictable stagnation short of mosquitoes in an old tire. Run, Run, 3rd and short pass. Punt. Bad pass, run, bad pass. Punt. For nearly three quarters, in a game that LSU trailed, the Tigers never got back on track to early power running that set the stage for what should have been a one-sided beating. In fact, Ware had 18 carries, and Ford a meager eight.

Auburn's offense was worse. Literally, LOL kind of stuff. Against an LSU defense that was already going to be a handful, time and again LOLfler called slow-developing plays (foreshadowing) and hung Frazier out to dry in the worst ways possible. Even worse, their football AIDS was apparently contagious, as complacency, clock-watching, and awful execution plagued LSU through out. To wit: the game's opening sequence:

Of course it was a safety. In a 12-10 game, that derpy-ass play call was the difference. Clearly LSU didn't want to be here, and plainly Auburn had no business being on the field. But in a game of unforced errors, bad decisions, and failing to take advantage of opportunities, the least incompetent team clawed their way to an ugly, uninspired victory.

Game in One Play: LSU leading Auburn 9-7 midway through the second quarter, 3rd and 6, Mettenberger feels the pocket collapse, and with the grace and agility of Freddie Kitchens, takes off. Running hard-ish and fast-ish to the first down marker, he then pulls up...inexplicably just slows down, where he is popped in the mouth and stopped 6 inches short. That play, that futility, that half-assery by both teams for three+ quarters...watch at your own peril.
Full game available in "related links"...if you can make it through one quarter.

Up Next: Alabama v. Western Kentucky