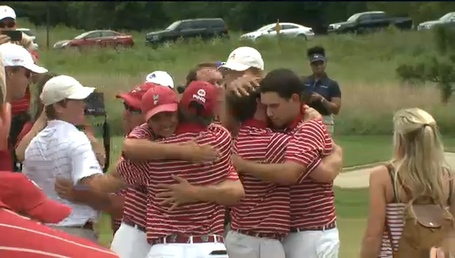 Once again, the Alabama Golf team dominated their opponent in match play defeating Illinois 4-1-0 in the final round. This is the first National Championship for the Crimson Tide.

Bobby Wyatt clinched the team's first win after only 13 holes.

Trey Mullinax was the #4 player on the team matched up with Illinois' #1 player. It was a close match throughout and it came down to the last hole with both players even. A bogie 4 was good enough as his opponent had a 5.

Almost simultaneously, Scott Strohmeyer and Cory Whitsett clinched their matches with Whitsett clinching just seconds before Strohmeyer took out his opposite. Justin Thomas was the lone lost but it didn't matter.

It is fitting that Cory Whitsett closed out this championship for it was he who came up just short on the final hole against Texas in 2012 to finish second.

If that does not excite you enough, know that of these 5 golfers only Strohmeyer is a senior. (PGA Pro Davis Love's son Dru Love is a freshman).

Although it was a little humid, the rains held off and the gallery was full of Crimson Tide fans cheering on the team. One fan wore his houndstooth hat. The announcers mentioned that this was probably one of the bigger galleries to attend this event.

Congratulation to our boys and coach Jay Seawell for bringing home another trophy for the Alabama trophy case. 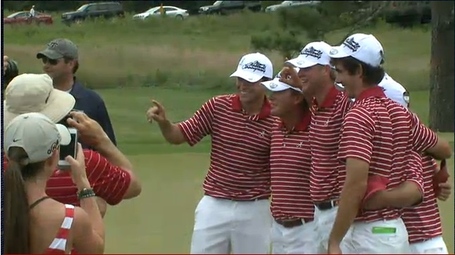