GUMP SO HARD, YOU GUYS

Isn't it great that series that revolve around the greatest plays of a championship season have become tradition (the real kind) around Roll 'Bama Roll?

These are what we here at RBR considered the "top" 16 plays of the 2012 championship season. I'm sure there are some that I forgot to include, sorry (not sorry). The plays are listed them 1-16 in a somewhat random order and is a single elimination contest.

This is for funsies, you guys. Yes, we fully understand Alabama wins championships as a team blah blah blah. But we as fans are able to (or at least should be able to) look at individual moments during a season and deem one as "the greatest". 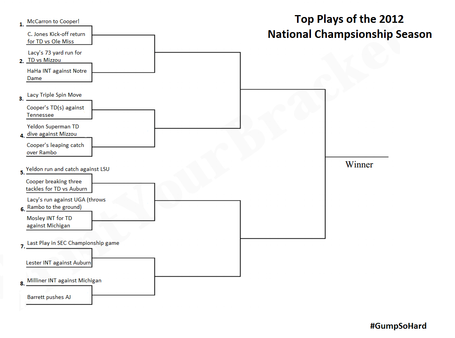 The magnitude of this play was felt all around the world of college football; without it there is likely no #15. It was a perfect play call, a perfect throw and Amari made the catch look routine.

Christion Jones kick-off return for a TD against Ole Miss

This play came at the perfect time for a 'Bama team that looked like it was just going through the motions. Alabama was trailing for the first time in the 2012 season and it lasted for all of 12 seconds. Roll Black Bears