Just 66 days till kick-off, you guys.

The outcome of Battle #1 was never really in question or really in doubt as McCarron to Cooper cruised to a 522-22 victory. I would like to know who those 22 people are who voted for Christion Jones? I mean, nothing against the play, but comon people.. (SLAL) Maybe he has some family members lurking around RBR?

Many of y'all complained that round one was a set up and a tad boring. Well, perhaps today's match-up causes a little more controversy. Yes, one play came in a slightly more important situation but if you look at each play all by their lonesome, they are equally impressive.

These are what we here at RBR considered the "top" 16 plays of the 2012 championship season. I'm sure there are some that I forgot to include, sorry (not sorry). The plays are listed them 1-16 in a somewhat random order and is a single elimination contest. 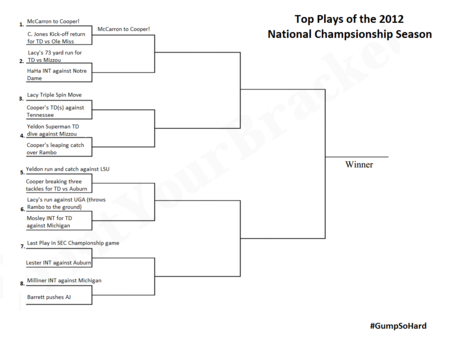 Eddie Lacy's 73 yard run for a TD against Mizzou

On Alabama's first drive of the game, in rather wet conditions, the 235 lb Eddie Lacy follows a pulling Barrett Jones off tackle and basically runs untouched for a 73 yard score. This would be a great play for film study due to the excellent blocking by the O-line and vision of Lacy to see the cut back lane. Poor Mizzou.

Early in the 3rd quarter, with the score 28-0 (lulz), Notre Dame is stringing together it's first scoring threat of the game. They sit at the 36 yard line and on 2nd and 10 try once again to attack the All-American Dee Milliner who is in man to man coverage against Notre Dame WR DaVaris Daniels. Though the perfectly in position Milliner makes a play on the ball, its HaHa that steals the show.

With seemingly no ND running game as a threat and already up by 28 points, the Alabama safeties are playing deep coverage just waiting for Golson to try this...