2012 Alabama vs Texas A&M Football Film Room: 1st and Goal from the Six

This may not be fun to watch, but it's necessary.

Share All sharing options for: 2012 Alabama vs Texas A&M Football Film Room: 1st and Goal from the Six

Y'all may hate me for this but in the end you'll appreciate the sense of closure you'll receive by watching the final Alabama drive of the Texas A&M game. It will be painful and will re-open old wounds. But what doesn't kill you only makes you stronger, right?

To be completely honest, I haven't been able to watch a single play from this game until today. After the SEC Championship game and #15, it was easy to just put this loss in the rear review mirror and forget it ever occurred. However, this game did happen. A&M and Manziel waltzed into Bryant-Denny Stadium and ruined our hopes for a perfect season. H8 U, Johnny.

1st and Goal from the six

After an obviously under thrown pass by AJ THAT SHOULD HAVE BEEN A TOUCHDOWN to a wide open Kenny Bell, Alabama sits at the 6 yard line. Four plays to get six yards. If you were sitting standing in the stands, at home, at a bar or god forbid some horrible persons wedding, was there any doubt in your mind 'Bama would score here? It just seemed like fate that we snatch victory from the jaws of defeat for the second week in a row.

If you were anything like me, you expected Alabama to come out and run the ball right at A&M. After all, the A&M defense had been on the field for most of the 2nd half and had to be a little out of sorts after the long reception by Bell. This is exactly what Alabama fans would consider Crimson Tide football. Line em up and win the game by physically dominating your opponent.

On 1st down, 'Bama comes out in the shotgun.(huh?) Eddie Lacy and Michael Williams are lined up to the right of AJ. A&M counters with its base 4-3 set. 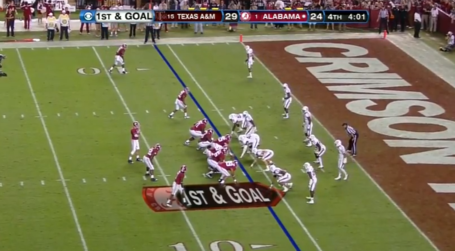 Just before the snap, Kenny Bell motions from the right of the formation to the left and settles in-between Amari Cooper and Christion Jones. The A&M corner follows him, which typically shows they are in Man coverage. 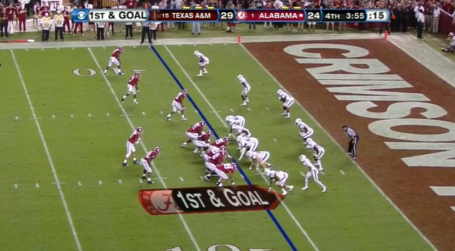 Notice all 11 A&M defenders with-in four yards of the line of scrimmage and no safety covering the endzone. Perfect time for a play action pass, right? Nope :( 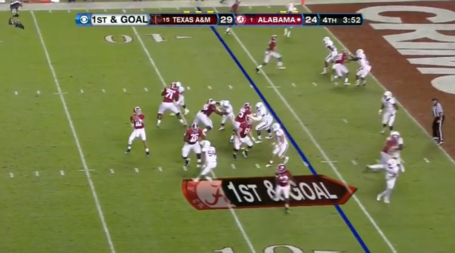 Instead, Alabama sends it's three WR's to the left of the formation on what seem like lazy out routes (Cooper was maybe looking for a jump ball or back shoulder pass) but all three were diversions attempting to clear the middle/right of the endzone.

Eddie Lacy heads to the right flat and it is obvious now the play was designed to go over the top to Michael Williams. A&M covers the route by Williams well and the play is over before it even begins. With no one open, AJ scrambles and is sacked for a 1.5 yard loss.

2nd and Goal from the seven

Now Alabama find its self in a precarious situation. The ball is near the left hash and the element of play action is thrown out the window. If you attempt another pass and it falls incomplete you are left with only two plays to grab seven yards. If Alabama knows this, so does the A&M defense. The only good option is to run the ball. Hopefully you grab 4-5 yards (maybe even get a score) which would set up a manageable 3rd down, when play action is once again an option. 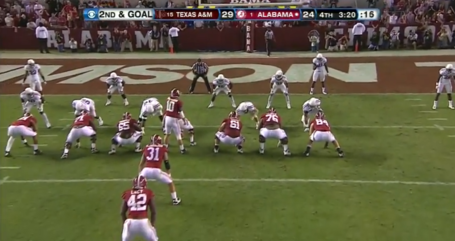 As you can see, on 2nd down Alabama does what it should have done on 1st down and comes out in a double tight end, I-formation set. Finally, Alabama football at its finest.

To match this heavy set, A&M lines up four D-lineman across the line, an OLB just over TE Michael Williams and a safety playing on Flukers outside eye. IMO, this is the perfect time for an inside run. You have four Bama blockers (Warmack, Jones, Steen, Johnson) to only 3-4 A&M defenders. Get a hat on a hat and you're in business. 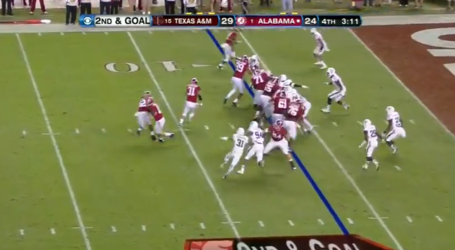 'Bama runs a classic zone blocking stretch play to the left side (short side). It's designed for the O-line/TE to block their man, the H-back to lock up the MLB and the running back to pick his hole. The problem, at least in my opinion, is if the defensive line stunts to that weak side (which they do), this makes it extremely difficult for the blockers to gain leverage. Getting your hat across their face is the key to gaining leverage. Awfully hard to do that when they (the D line) have a head start. Once the defense has leverage, running lanes are virtually gone. 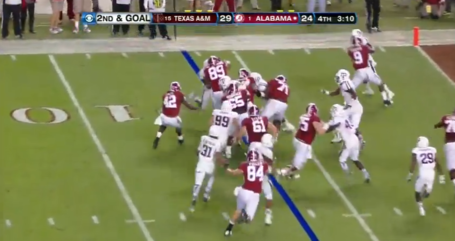 Give the A&M defense credit here. The OLB lined up over Williams does his job and doesn't give up outside leverage. This forces Lacy back to the middle of the field and he's swallowed up by the pursing defenders. Eddie gains only a yard and a half. It's now..

3rd and goal, from the five

So what do you do now? The options are just as endless as they are obvious. You could try another running play, maybe this time attack the middle but do you really expect to get five yards? If A&M is able to stuff the play, you'll be left with a long 4th and goal. Play action is an option but would be expected. 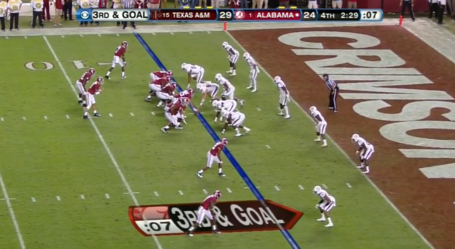 Shotgun, again. A&M matches with a 4-3, again. Kenny Bell motions from right to left, but this time no A&M defender follows — zone coverage. 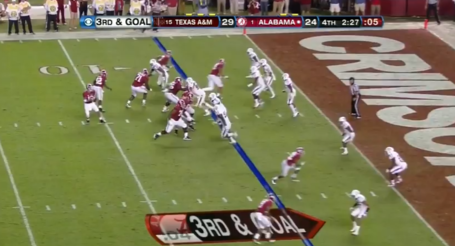 At the snap, you'll see A&M is indeed in zone (which is perfect for our play call). Christion Jones who is lined up in the slot, heads to the back of the end-zone, and Amari hesitates up the field and cuts to the inside on a slant. The safety who moved up to cover THE SLANT is in perfect position and once again, the play was over before it began. AJ sees the play is dead and tries to make something out of nothing. 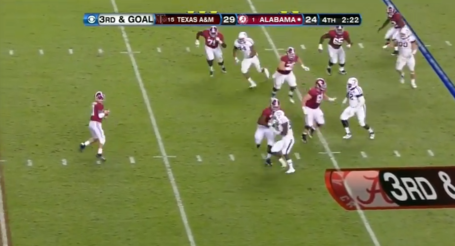 He scrambles to his right looking for maybe Jones or Amari. NOPE. 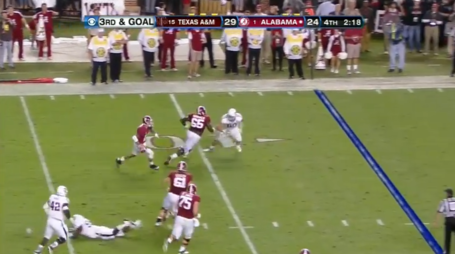 He then circles back to his left, runs around looking for someone, anyone to throw to. Finally, he sees an opening and cuts back to the middle of the field trying to do his best Johnny Football impersonation. What hurts is the next shot. He's now committed to the run and doesn't see a wide open Eddie Lacy standing in the back of the endzone. 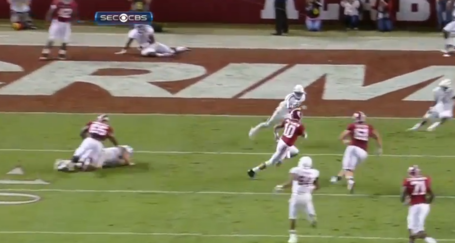 Perhaps I miss understand the rule, but from my view, AJ and no O-lineman have crossed the LOS. So, Eddie is an eligible receiver and it wouldn't take much more than a flick of the wrist and Alabama would take the lead. That is unbelievably painful if true.

As we well know, AJ doesn't see Lacy, heads for the endzone and is hammered at about the two.

4th and goal, from the two

If you're prone to heavy drinking, you may want to skip to the comments and commence cussing me out for ruining your Thursday.

Alabama is now down to it's final play. You only need two yards and 'Bama actually finds itself in a good situation. You could throw, run play action or run the ball. Time for a time out to discuss the most important play of the season, right? NOPE. NOT GONNA DO IT. 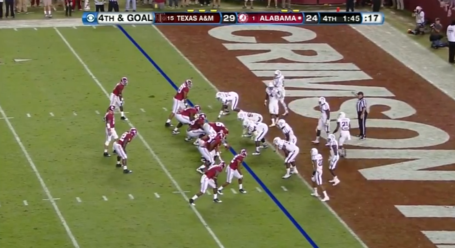 Alabama hurries to the line in a weak-side, single-back shotgun flex formation. A&M responds again with a 4-3. Kenny Bell once again motions, this time from left to right. 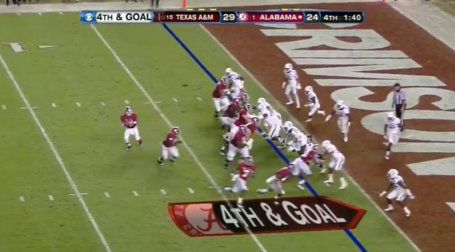 This is actually a good play call given the situation. It avoids the possibility of a sack (AJ is rolled to his right away from pressure), he's able to make a quick read and the motioning WR (Bell) is likely to be lost by the defense.. 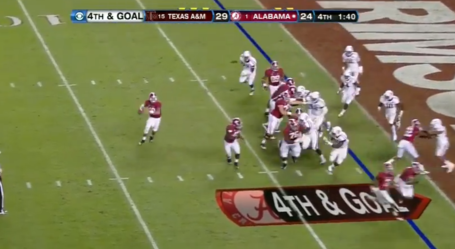 The idea is to have Amari pick the outside CB, leaving Bell wide open in the flat. Easy pitch and catch, right? It would have worked but for two things..

1. Bell actually outruns Amari or Amari doesn't get there fast enough. Either way, the slot WR must get to the flat to disrupt the coverage by the CB. All AJ and Bell need is just a hair of an opening.

2. The CB Everret sees the pick coming and jumps in front of Amari putting him in perfect position to intercept the pass. 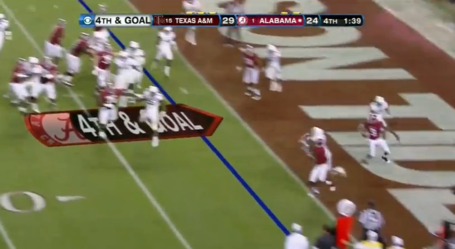 Watching the replay I honestly think AJ never saw Everrett and/or never thought he'd be in that position. And since the pass was thrown behind Bell it was an easy INT. I'm not really sure even a perfectly thrown ball is caught by Bell. Everret was in great position to get a hand on the ball no matter where it was thrown.

This has to go down as one of the most frustrating series of play calls ever for Alabama. You had four plays to get six yards against a defense on its heels. I'm sure Nussmeier has nightmares about these four plays and especially the 1st down call which in my book was inexcusable. Sure, we get our redemption later in the season but man this one still hurts.

You can watch the replay here if you'd like. It isn't pretty but I'm happy I tortured myself for the last three hours. It has rekindled my hate for A&M and will make September 14th even that much sweeter.