I'm not a huge pre-season, preview, says nothing special outside of "Alabama will be good, again" magazine guy; they just seem to be a thing of the past. However, during my child hood and while I lived in Tennessee, going to Barnes and Nobles and reading through these magazines was the only way I got any news on Alabama's upcoming season. Thank god we now have the internet and RBR, right?!

That said, it's the off-season and we've spent the last 24 hrs debating the fair-weatherness of the Alabama fan base. How about, instead of barking at each other, we switch things up and discuss how dumb Phil Steele is? 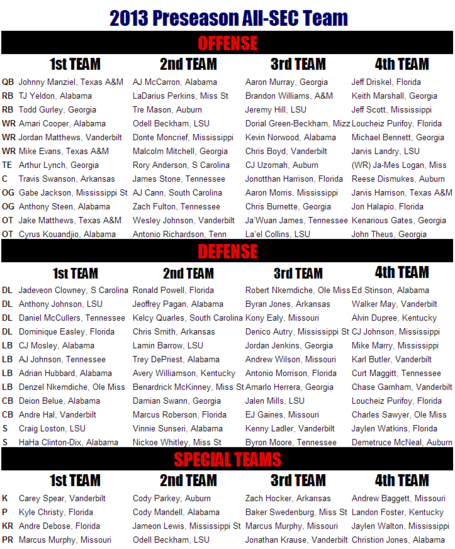 Original image and article can be found here

I get it, Manziel won the Heisman but how do you put a 2 (3) time National Championship winning QB as a 2nd teamer? Maybe he's just trying to sell magazines or create controversy? Perhaps he honestly believes Manziel is the better QB? All I know is that AJ should be given the bump due to what he has accomplished over this three year career.

Maybe I'm crazy but why even put a guy who is indefinitely suspended on this list at all? If he returns to LSU he will probably be the 2nd or 3rd best running back in the league but until then he shouldn't even be mentioned.

This is probably ungumpy of me but I just don't see Vinnie being that high on this list. IMO, he may be the 3rd best Safety on ALABAMA's defense, let alone the SEC. He did improve during Spring but my gut says Landon Collins is the starter by the 4th game of the season.

I think Cody Mandell will end up as the best overall punter in the SEC by years end. He was extremely consistent in 2012 adding 5 yards to his yards per punt average from a shaky at best 2011 season..

Deion Belue as a 1st teamer may be a stretch but I really hope Steele is right and Belue makes the jump to the next great 'Bama CB.

It's crazy to see only one Alabama defensive linemen on either the 1st or 2nd team. (Pagan is a 2nd teamer). Defensive line may be the biggest unknown for the entire Alabama team.

Steen and CyKo as 1st team offensive lineman is no shocker. We will need both those guys to lead this group if we have any plans on 3-peating. Fortunately for us, if you take Barrett Jones by his word, Ryan Kelly will be the next great Alabama o-lineman.