Elijah Hood is an elite running back prospect out of Charlotte Catholic High School in North Carolina. He committed to Notre Dame back in April, but Alabama has continued to recruit him heavily, as evidenced by the stack of correspondence he displayed. Hood decided to dispose of these letters in a rather public and ignominious fashion: by flushing them. A day later, the video has been pulled down, but this is the internet, where nothing truly dies. Mike Foss of USA Today managed to capture a copy of the video before it was taken down:

The fun only lasted one day, then the apologies started pouring in:

In regards to my post yesterday, it was wrong and very disrespectful to Alabama. My attempt at humor was immature, and wrong I'm sorry.

In his defense, this is simply a young man doing something silly and enjoying the attention he's been given. If you put the spotlight on a seventeen year old kid and arm him with a device to publicize every thought that goes through his mushy, teenage head, these things are bound to happen.

I will say that Hood was right about one thing. Between Notre Dame and Bama last year, only one deserved to be in the bowl. 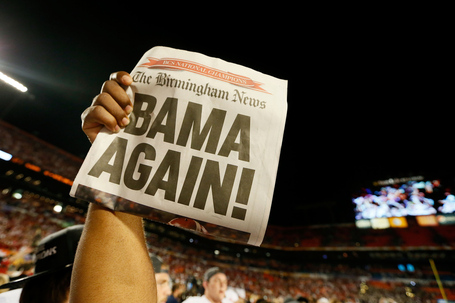