Top Plays of the Alabama Football 2012 National Championship Season: AJ to TJ vs Amari Cooper Is Better Than the Entire Auburn Defense

Share All sharing options for: Top Plays of the Alabama Football 2012 National Championship Season: AJ to TJ vs Amari Cooper Is Better Than the Entire Auburn Defense 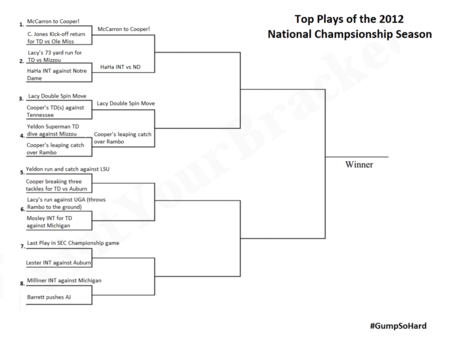 This play needs no introduction. There are only a handful of plays that truly defined the 2012 season and this is assuredly one of them. I could watch it 100 times, then 1000 times more and never get bored. It's that good.

Amari Cooper is better than the entire Auburn defense.

Any given year this play ends up being the top play we all gump over but considering how terribly awful Auburn was last year, any play against them seemed ho hum awesome. That said, it is Auburn, and any play that makes them look silly (and there were a lot to choose from) is worth a 2nd look.