Look at the Wide Receiver two deep for 2013 and try not to gump...I dare you.

Share All sharing options for: Top Plays of the 2012 National Championship Season: Lacy Throws Rambo vs Mosley INT for TD 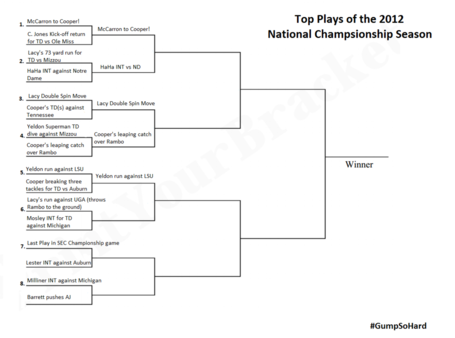 The SEC Championship game was one giant highlight reel for the Alabama running game and especially for Lacy. There were virtually 20 different runs to choose from and honestly any one play could be considered "the best". However, this run sums up the physicality of Eddie Lacy to a T.

Late in the 3rd quarter, with Alabama trailing 18-21, the Tide coaching staff finally pulled their collective heads out of their collective asses and decided to RUN THE DANG BALL. The entire nation watched as Alabama lined up in mostly single back, double tight end sets and relentlessly pounded the UGA defense play after play. I'm not sure there was an exact count but it felt like Coach Nuss called 20 straight running plays, with this one as the pièce de résistance..

C.J. Mosley Interception for a Touchdown Against Michigan

At face value this is just a bad throw and read by an overrated quarterback. But considering the injury Mosley suffered in the 2011 National Championship game and the question marks surrounding the 2012 defense, this is play is more redemption than routine.

Highlights from the Michigan game can be seen here