Top Plays of the 2012 National Championship Season: Final Play Against UGA vs Lester INT Against Auburn

SEC Media Days start in just a few hours...We are officially on the home stretch

Share All sharing options for: Top Plays of the 2012 National Championship Season: Final Play Against UGA vs Lester INT Against Auburn 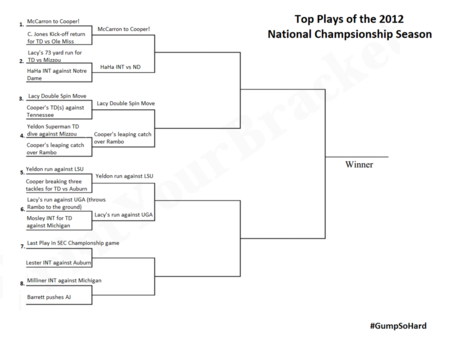 Beating your rival never gets old, destroying your rival 49-0 and doing so with 42 first half points is priceless. Literally every offensive play Alabama drew up looked like it was going for a touchdown and Auburn only had a few drives that resulted in yards gained. One of the plays that seemed to work for Auburn was a seem route, with the WR/TE finding the soft spot in the zone just behind the linebacker and in-front of the safeties.

On this play, on 3rd and 8, Alabama sends a safety blitz (both Sunseri and HaHa blitz) and Auburn's #81 C.J. Uzomah is left wide open down the left hash. This play isn't special because of the interception (I could have made the catch) but it shows the ineptitude of the Auburn offense. Even when they do something right, they found a way to do it oh so wrong.

Here's another play that needs no introduction. Outside of the Yeldon screen pass against LSU, no play better defined the 2012 season. Whether or not it's your favorite play is up to each Gump, but rest assured, it may be single most important play of the season.