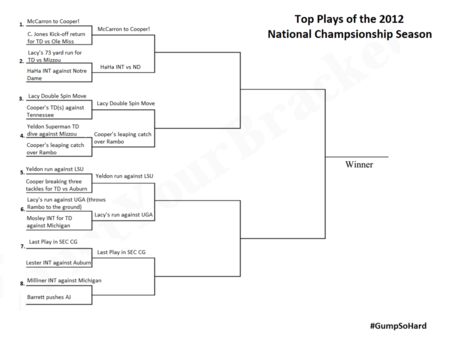 This is hands down one of my favorite plays from 2012. Each time I can't help but laugh as Dee throws a 200+ man to the turf like a rag doll. Also, watching how amp'd the entire defense was after the play made me believe 2012 could be special.

Most people outside of the Alabama fan base probably think ill of this rather odd moment in Crimson Tide history. 'Bama fans however feel it epitomizes the Process we've all come to love — Play to a standard and do your job, every play.

Sure, I could have gone without watching our senior, All-Everything center turn around and shove his QB just moments before they would hoist yet another Crystal football but it in the end, it showed why Alabama is Alabama..The game is over, we are going to win yet our players never let up and still play with a competitive edge.