Share All sharing options for: The Jumbo Package │07.29.13

Packers rookie running back Lacy has burden to carry

At dinner, Lacy pours a layer of A1 sauce over his 16-ounce boneless ribeye. The appetizer, bacon-covered scallops, was devoured in record time. Lacy never ate scallops before, but when he heard "bacon" from the waitress he was all in. This size, this deceptive mass, is what the Packers coveted. Lacy's built like a bouncer, moves like a midfielder.

I always knew Lacy and I would be best friends but now I'm sure of it. I wonder if he'd be okay with the top bunk?

In all seriousness though, Lacy has a tremendous opportunity placed before him. Stay healthy, stay hungry and become a star. He has the tools and the god given ability, add to that one of the best run organizations in the NFL and the sky is truly the limit.

"I feel like I made a lot of plays that stood out and plenty of games that showed what kind of player I was, but it's nice to have that play as a memory for people," he said. "It's really something that had never been done before and it was unlike any play I had ever made." Prothro said that the memory of his leg injury is something that has improved with time. He now sees it as a part of his life's path.

Glad to hear Prothro has accepted his path in life and is trying to make the best of it. He could have easily thrown his life away like many before him. I kind of wish he'd join the 'Bama coaching staff and at least be apart of the game somehow.

Get that money, Dee. I worry that the Jets will ruin him but still, you have to be excited for a guy like Milliner.

A picture of Alabama's Dee Liner, an incoming freshman defensive end, caused quite a stir over the weekend when it was posted to Instagram and features Liner holding cash with the hashtag #StruggleOverWit.

Jebus! Has stupid become a thing, again? No Dee we aren't "judging you" we are asking you to not do stupid things like post pictures of yourself with a load of cash. Comon! The last guy who did this ended up robbing a guy... 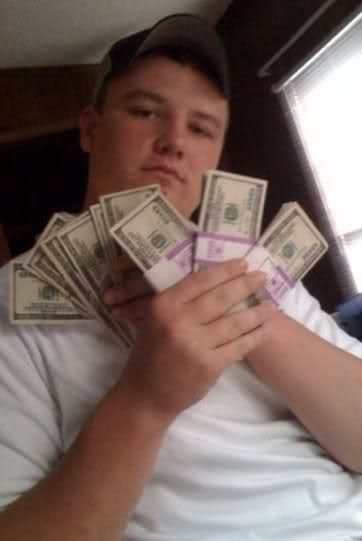 New Orleans RB Pierre Thomas to teammate Mark Ingram: 'Play like you did at Alabama' | al.com

With Chris Ivory no longer a part of the backfield, there will be more opportunities for Ingram in his third NFL season. "We've been talking about having a more expansive role this year and I'm excited about that and just ready to prove myself," Ingram said. He did get one tip from teammate Pierre Thomas. "Play like you did at Alabama, while acknowledging this is not Alabama," Thomas said. "He can't listen to all that nonsense. He's got to block that out."

Hey Saints, let me give you a little insight on how to use your HEISMAN trophy winning RUNNING BACK. It's called let him RUN THE DANG BALL. (See South Carolina game circa 2009) If you give him more than 3 carries a game, he might actually produce yards.

Sure, Ingram has struggled with injuries, even though he's not exactly been a large part of the offense, so concerns on whether or not his body can can hold up are legitimate. Still, he's not a third down back, so stop using him like one.

Fluker said he had sunk to the bottom of a 12-foot swimming pool when he was 4. Pulled out by his mother, he said he'd been scared of drowning since. Te'o was swimming laps to work out while at the symposium when he noticed Fluker standing in the shallow end of the pool. "I was terrified of water," Gehlken quoted Fluker as saying. "He was like, 'Man, relax. I got you.'"

Te'o stop doing nice things so I can continue to troll you by posting missed tackle pictures every time I get a chance, m'kay?

If you are in the camp that believes players should be paid, this is where your argument should start. If we can afford to spend 10 MILLION plus on a coaching staff, we can find it in the budget to give the players a little something. The amount of money coaches are getting paid these days has officially gotten out of hand. Free market my butt. Saban may be is worth every penny but my stomach turns every time I see the price tag that comes with his loyalty.