McBride (6-4, 332), who could project as an offensive guard or a defensive tackle, also had offers from Auburn, Florida State, Mississippi State, Kentucky, Louisville, Marshall, South Florida, Central Florida, FIU, Florida Atlantic, Ohio and Western Kentucky.
Rivals.com rates him as the No. 21 offensive guard in the country, while 247Sports lists him as the No. 24 defensive tackle. Both rate him as a 3-star prospect.

McBride is a big dude with impressive speed for his size. His highlight reel shows him flat out abusing the competition, both as an offensive guard and as a defensive tackle. You can take his current recruiting rankings to the bank and cash them in for the valueless commodity that they are. This kid isn't a three star player. 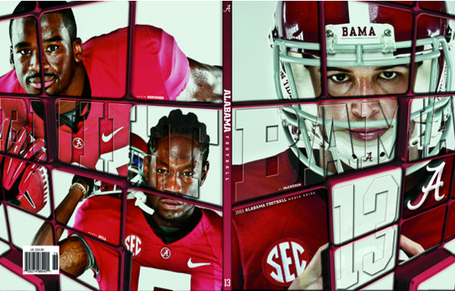 There are three other variations, and they all look awesome. My favorite is the one with Mosley, Hubbard, and Stinson. Which is yours?

Kingsbury brings up a good point, namely that if one method of winning college football games can be questioned, why shouldn't another? The brash Kingsbury upped the ante even further, noting that the SEC skates by without having to face the kind of dynamic offenses seen in the Big 12.

"If Alabama or LSU or those guys faced these offenses all the time, each and every week, it would be different. That's just a fact," Kingsbury said.

I couldn't agree more with Kingsbury on that last point. For instance, in '08 when Florida ran into the buzzsaw Oklahoma offense, they allowed a whopping 14 points (37.1 points below Oklahoma's average that year. Similarly, when Alabama faced off against Texas's much ballyhooed offense, they allowed 21 points (18.3 points below Texas's average that year). So, Kliff, you're absolutely correct. If Alabama or LSU faced those guys all the time, it would be different, but only in the sense that the aura of the Big 12 offenses would be diminished greatly.

After months of highly competitive training and testing, The Opening, presented by Nike Football, will bring together 161 of the nation's top high school football prospects for the ultimate football experience. The four-day competition, taking place at Nike's World Headquarters in Beaverton, Oregon, from June 30 to July 3, will provide athletes the opportunity to learn from, and compete with, the best in the game.

Be sure to follow SB Nation's recruiting coverage, as they provide some great insight into one of the biggest recruiting events on the schedule.

Which Media cover do you prefer?

This poll is closed