These are what we here at RBR considered the "Top" 16 plays of the 2012 championship season. I'm sure there are some that I forgot to include, sorry (not sorry). The plays are listed them 1-16 in a somewhat random order and is a single elimination contest. 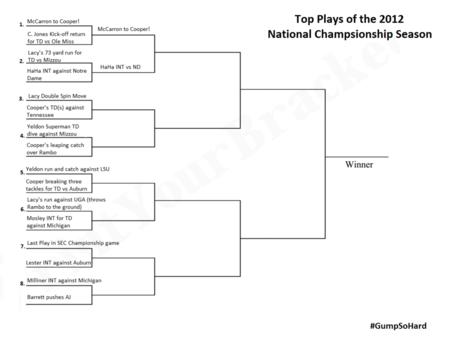 With Alabama up 21-0, and the imaginary hopes of a Notre Dame perfect season on life support, the dreamlike ND defense was desperately praying for a stop just before half. Maybe, just maybe, they could stage a comeback in the 2nd half but then this happened...

7 REC, 162 YDS, 2 TD — That was the stat line for freshman WR Amari Cooper against Tennessee. The first TD came early in the 1st quarter when McCarron found a wide open Cooper just sitting in the back of the end zone. The 2nd came later in the 3rd on a badly under thrown pass by AJ where Coop had to fight two UT defenders for the ball.

My god, the freshman.